Gorgeous views, fun people and some beers? What more could you need?! Brienne and Joshua headed to the desert just outside Vegas for their pop up micro wedding with a few friends and and family before heading back to the strip to party the night away!

Here are a few words from their photographer Nate about the day and the couple!

“Bri and Josh have spent almost a decade together, first meeting on a dating app and then quickly making it official in person. Since then, they’ve faced all sorts of highs and lows, and like many couples, weathered it all to make it their amazing wedding day.

But if you would have asked Brienne or Josh just a year ago if they ever thought that they would have a Las Vegas desert elopement, they would have laughed at you. You see, like many couples in 2020, this was not their original plan. But thanks to the pandemic and concerns for health and safety, their plans to hear wedding bells changed.

I first met Brienne and Josh through a mutual friend, sweet Emily, a local photographer and maid of honor in this wedding. Since Emily was already carrying the responsibilities of being a maid of honor, it didn’t make sense to also ask her to photograph her best friends’ wedding day. So, she reached out to me and we all met at Brokerage Brewing in West Lafayette, Indiana to chat about their plans. Originally, the plan was get married at Hidden Hollow Farm in Crawfordsville, Indiana. It was planned to quite the party with hundreds of their friends and family invited.

When the pandemic first began, Brienne had reached out to me and had asked about alternatives and I assured her (early on) that things should be fine and that there was nothing to worry about. Of course, that changed when restrictions began. Even though the restrictions have mostly lifted in Indiana, the concern for health of the elderly and young was present and as guests began returning RSVP’s of “unable to attend”, they decided that the best thing to do would be to just elope.

I met with Bri and Josh about two months back after Bri had called me on the phone, crying that some of her best friends were unable to attend her wedding due to health concerns and their children. So I came up with the solution of hosting a Las Vegas desert elopement. Immediately, the skies cleared and Bri and I began planning.

You see, Bri’s grandparents LOVE Vegas and Bri also loves Las Vegas. So getting to spend a little time in her favorite city made sense. After conferring with her grandparents, she gave me the green light to plan their elopement in just under two months.

Next, we needed a place for them to get married. We discussed wedding chapels such as Paradise Wedding Chapel but ended up settling on a Las Vegas desert elopement feel. Since I’m apparently the master of the Las Vegas desert, having adventured to it multiple times this year, we settled on the Jean Roach Dry Lake Bed. Nestled between the town of Jean and Las Vegas, it was only a short 30 minute drive from their hotel to this beautiful spot.

Accompanied by their closest friends and family members, 13 of us rode from The Paris to the desert for this desert elopement in Las Vegas. Josh and some of the crew out to the desert to find a spot and he and the fellas arrived early to set up a ceremony area. He even created a very authentic and lovely aisleway for his soon to be bride to walk down from pumice like rocks from the lake bed.I drove up with the ladies and kept Bri in the car (and in the air conditioning since it was 120 degrees at the time) until it was time. We then had everyone queued and ready to walk and the ceremony began.

“Wild Horses” a Rolling Stones cover by The Sundays greeted everyone in the desert as the ceremony began and as Fireman (their officiant) walked down, I couldn’t help but feel such a sense of pride and accomplishment at seeing the fruits of our efforts pay off. Exactly how I had always envisioned it and how Bri had dreamed it. “Emmylou” by First Aid Kit proceeded the processional and finally it was time for Bri to walk down the aisle. Accompanied by her grandfather, Josh kept his back turned until she was at the end of the aisle he had created for her. Just as Lana del Rey’s “Young and Beautiful” began playing, he turned around to see his desert bride walk down the aisle in her beautifully fitted lace gown and boots.

What made their ceremony so unique and sweet was that their vows were handwritten, meaningful, and intimate. There were no rehearsed lines or tired cliches. Everything about their vows and promises to one another were from the heart. After their vows were exchanged, they were presented with locks and keys which they joined together forever before tossing the keys into the great dusty desert.

We spent the rest of the evening photographing their portraits at the dry lake bed, watching the sunset there and letting of beautiful purple smoke bombs, and enjoying some crisp Bud Lights in as the sun slid behind the mountains to the west. After it was dark, we all loaded into our vehicles and went to the “Welcome to Fabulous Las Vegas” sign and took portraits there.  And then left for Fries’N’Pies, a poutine and pizza place a few blocks off the strip with a dozen different poutines and the best damn cheese sticks you’ll ever eat. ” 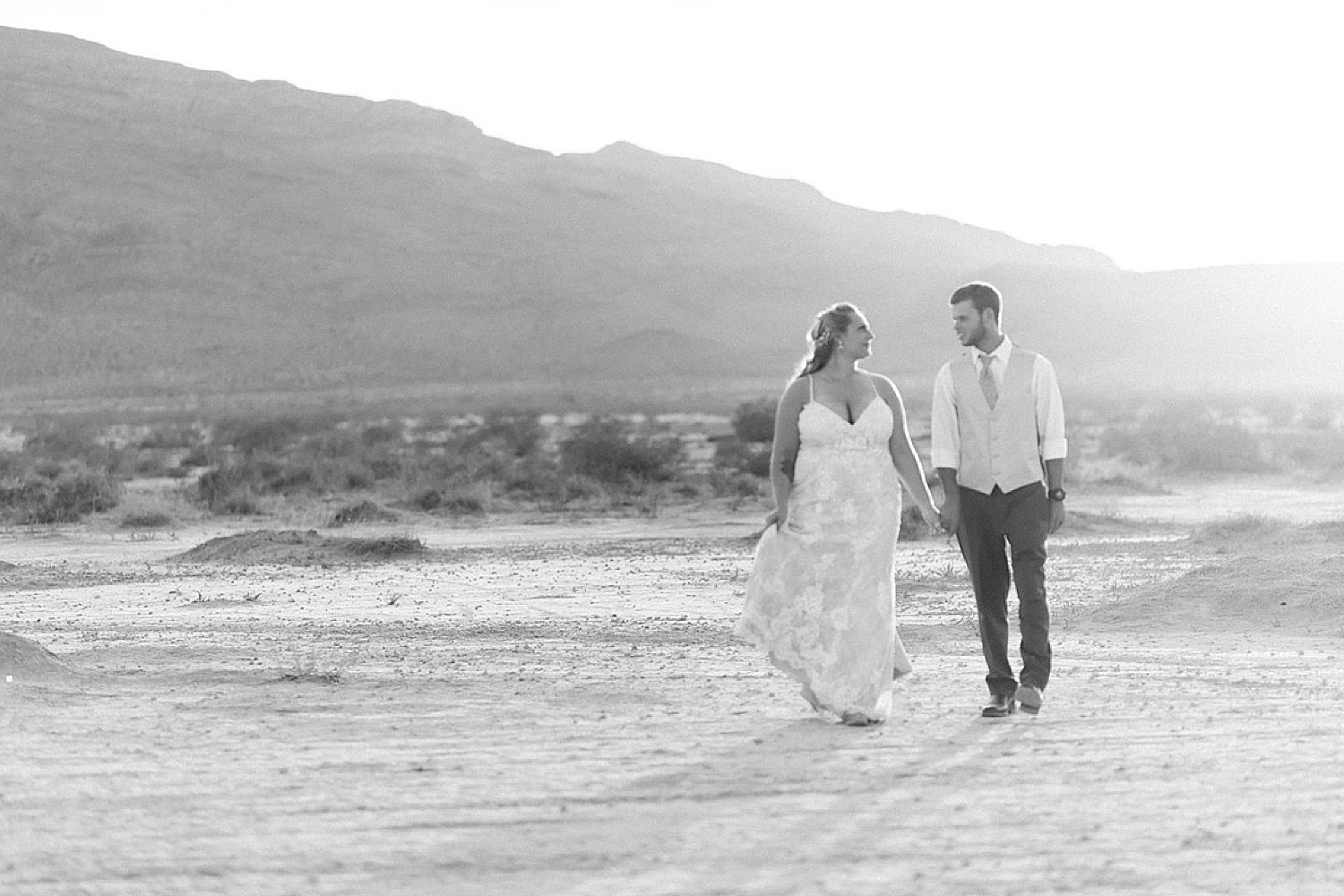 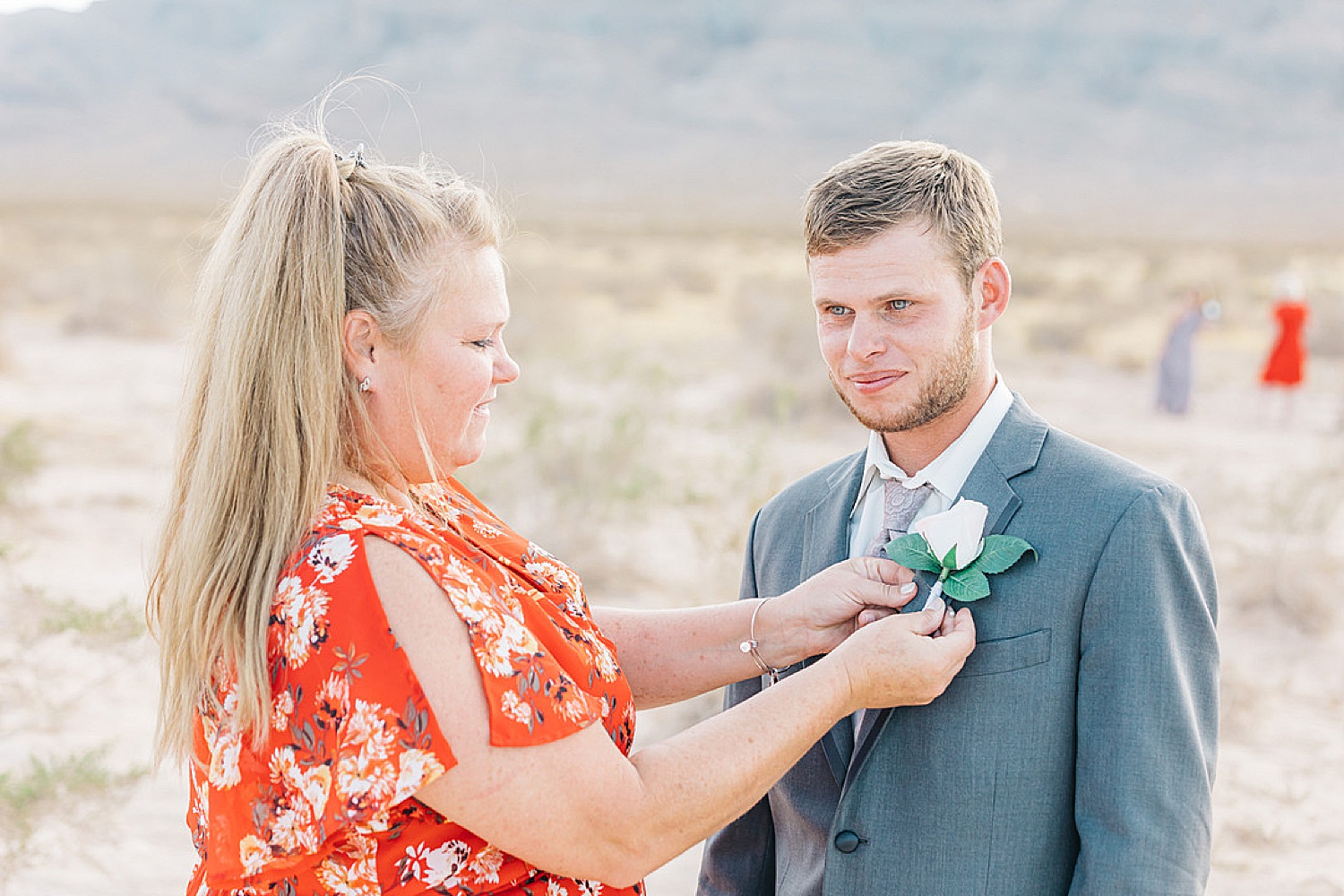 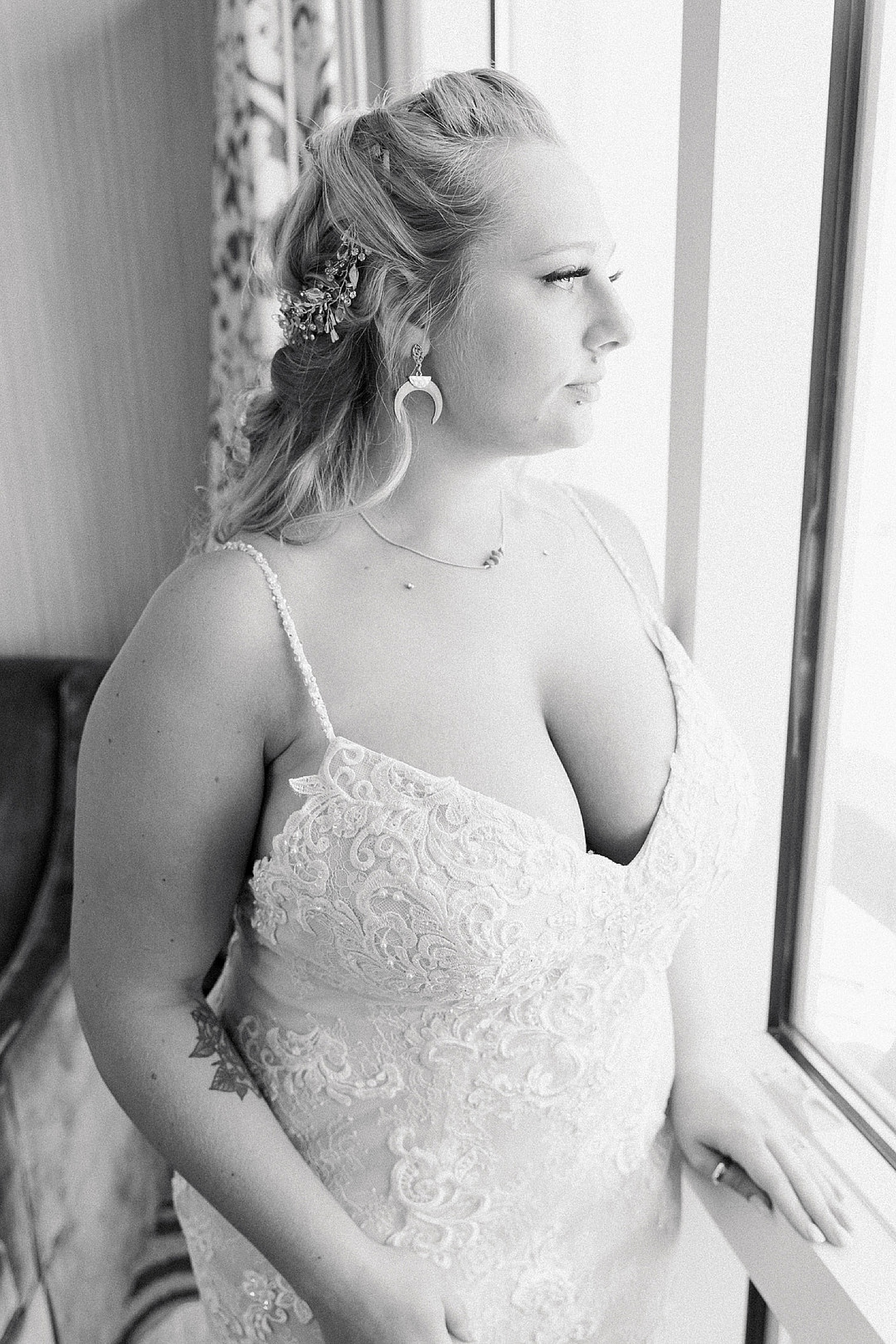 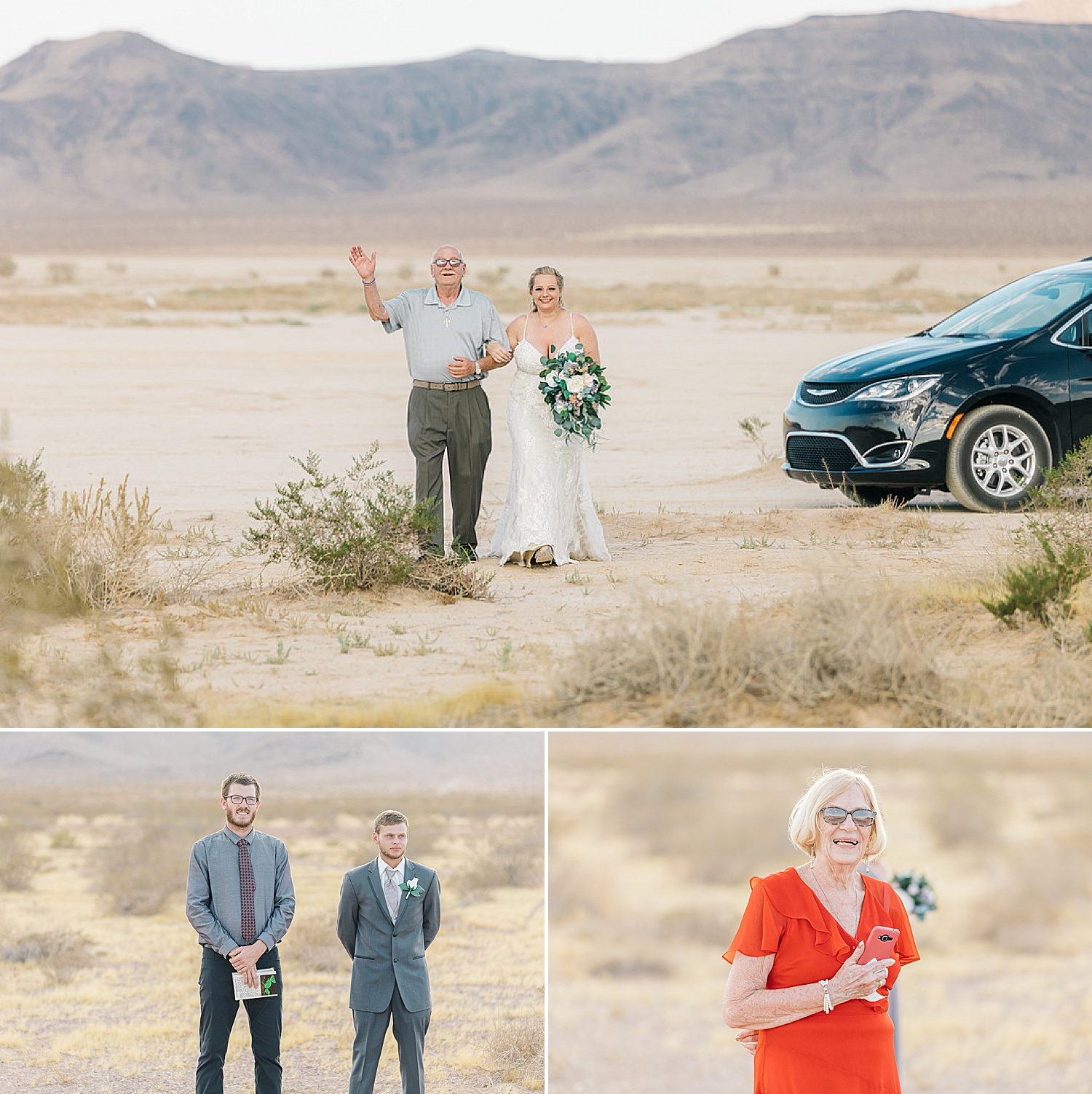 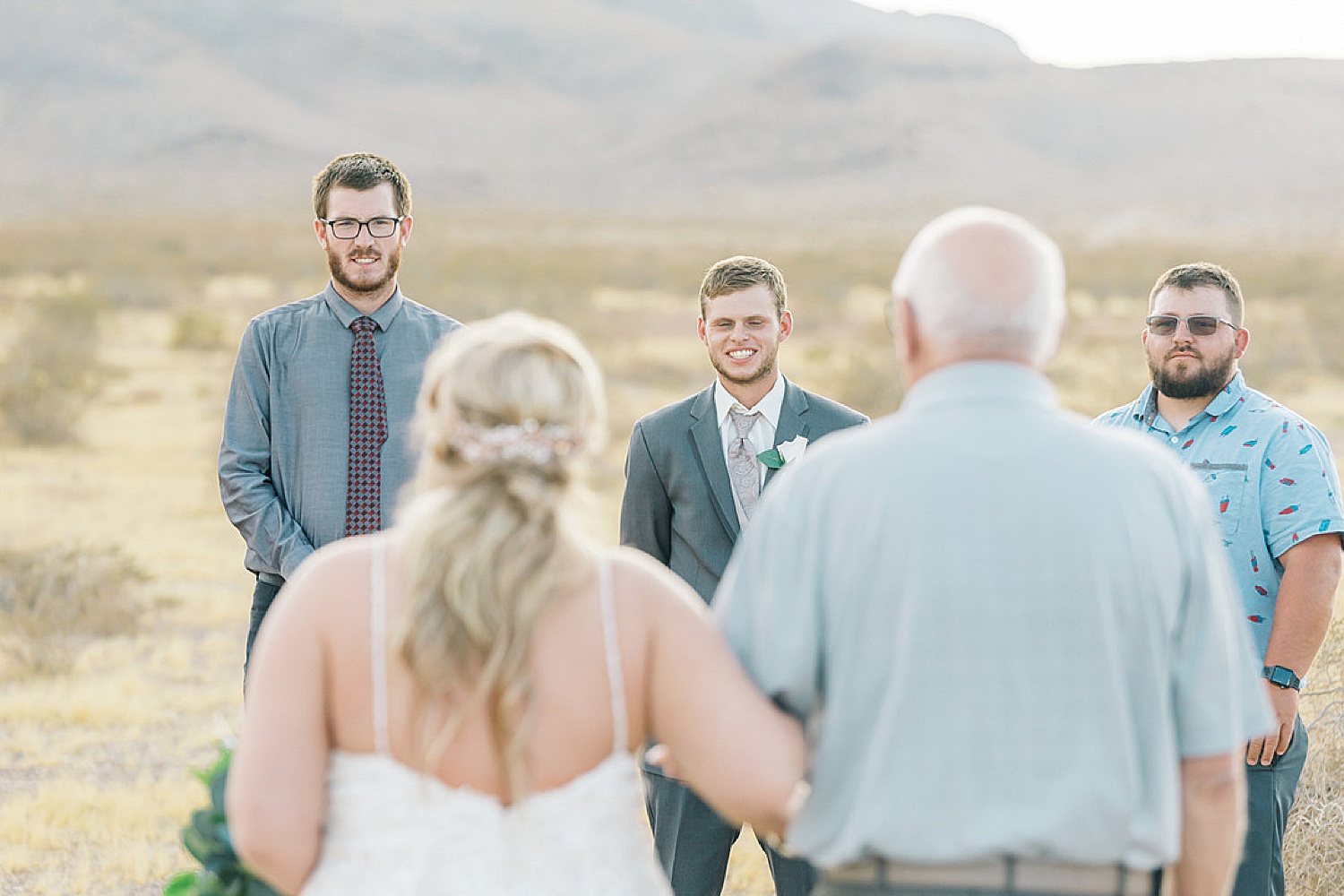 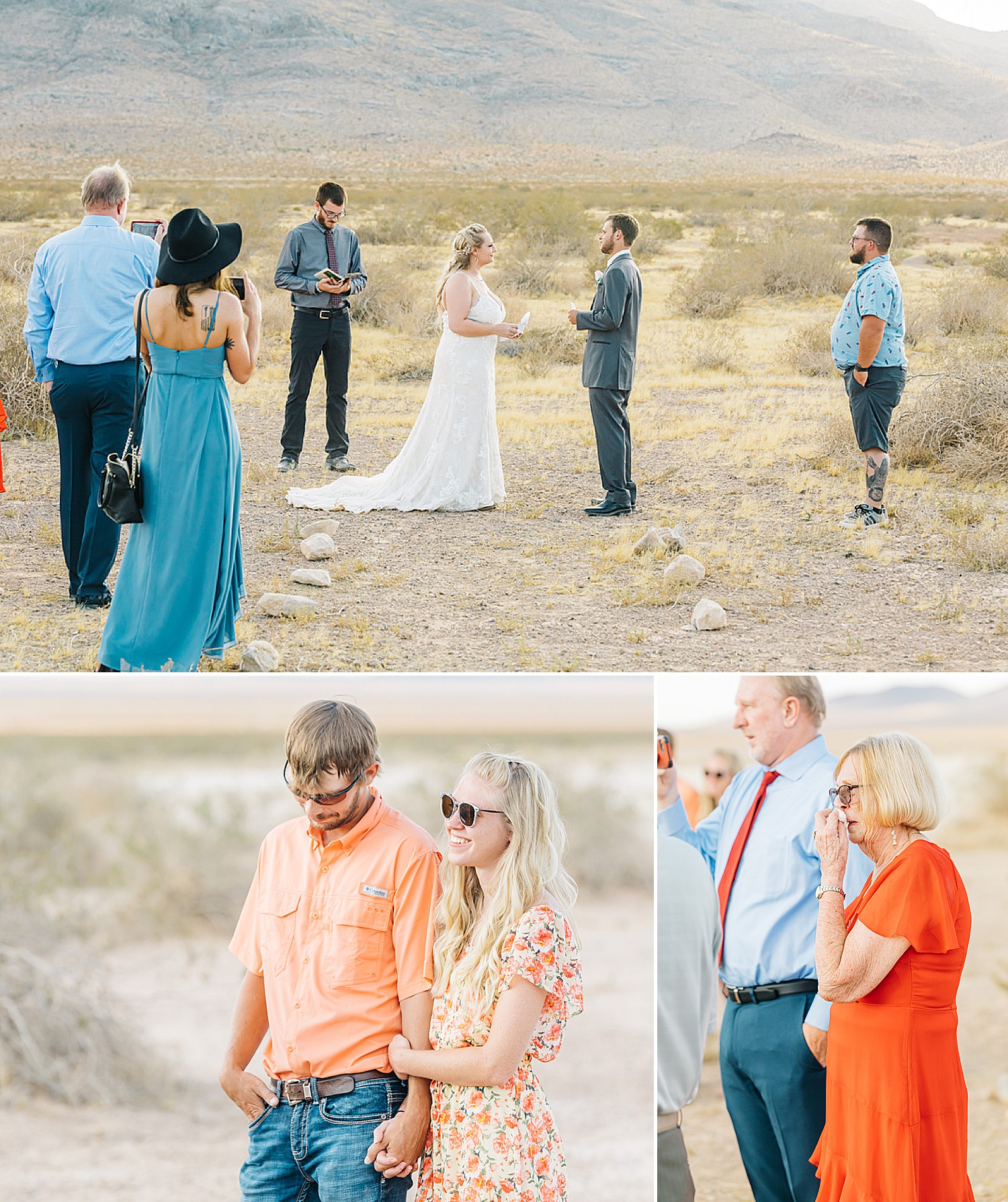 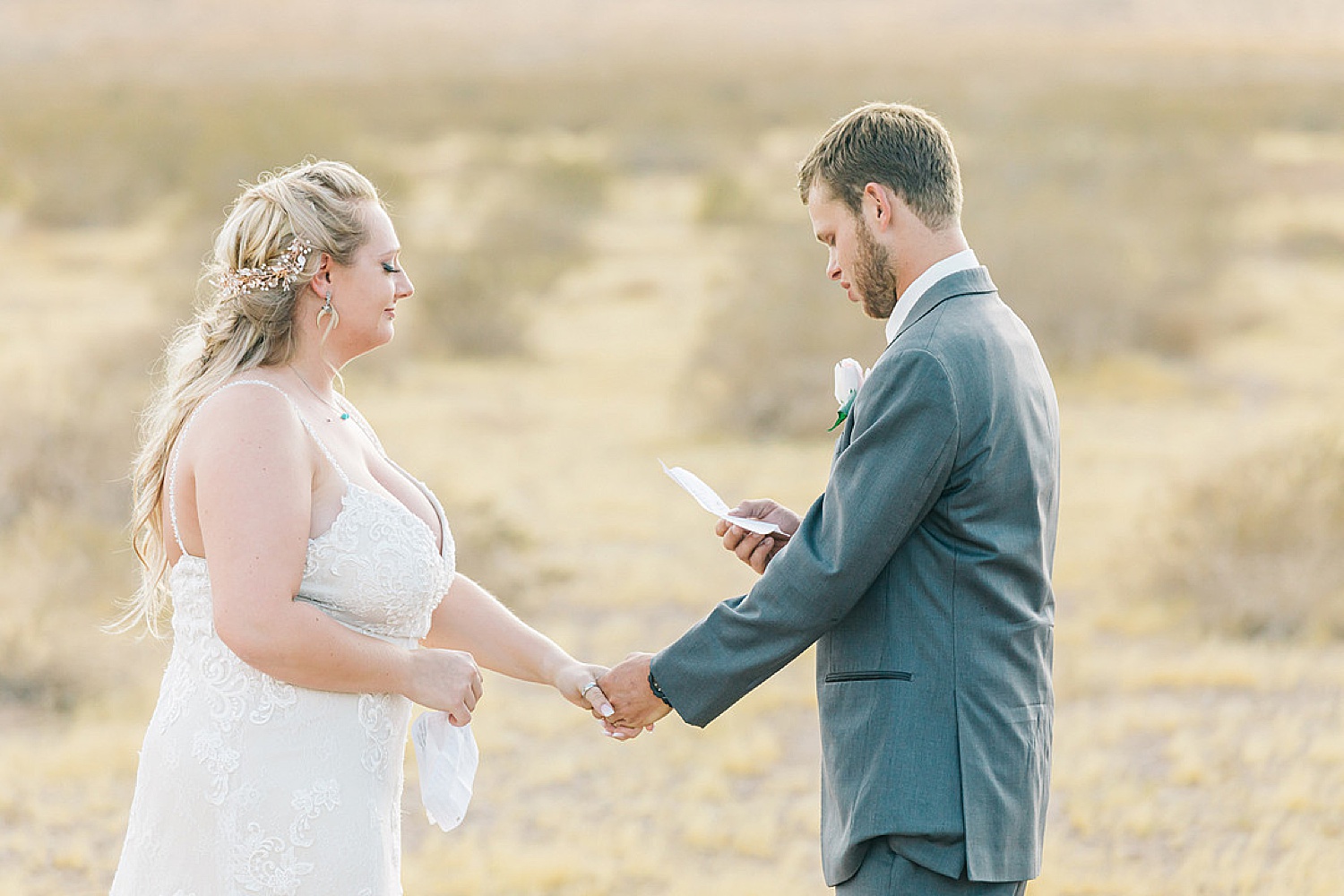 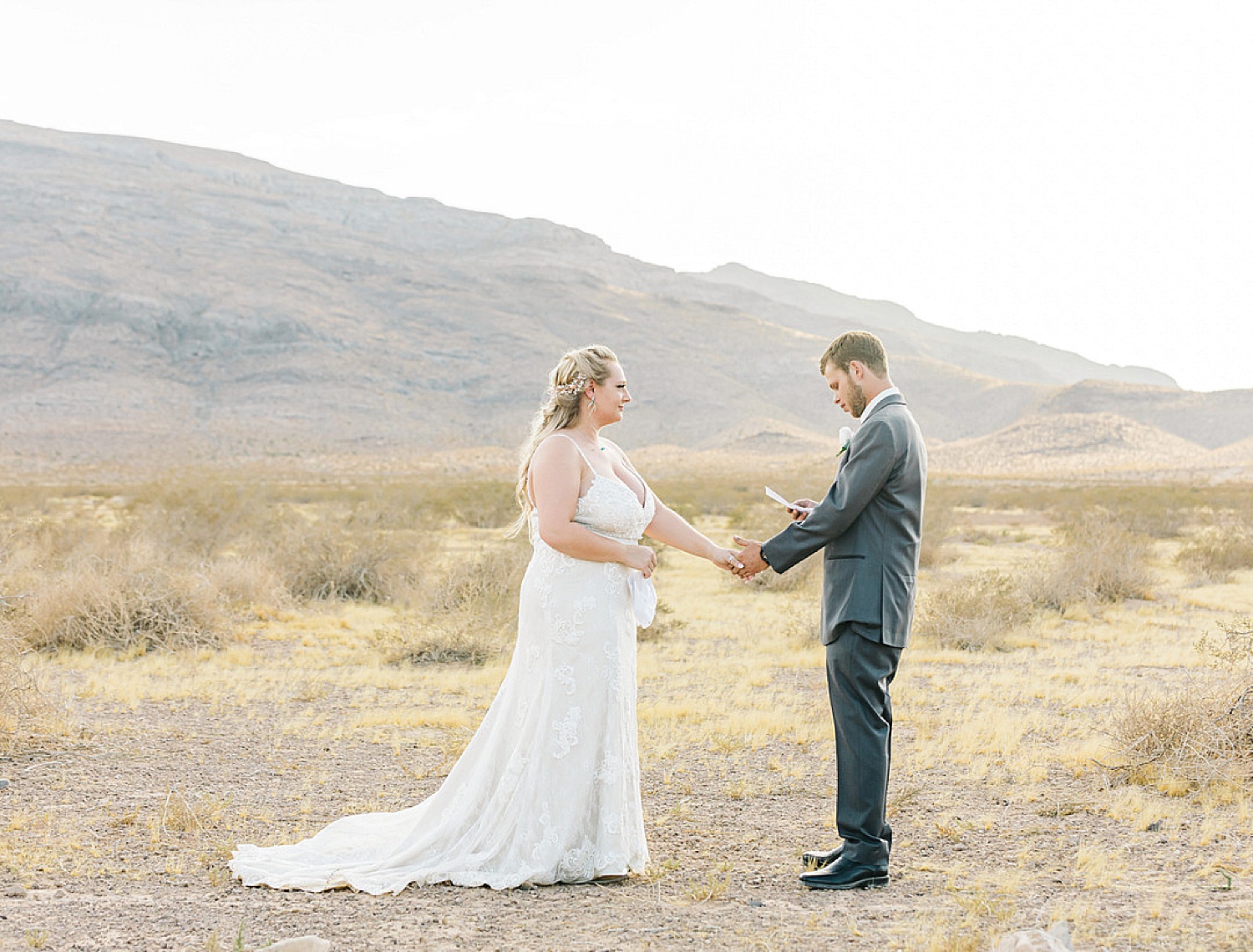 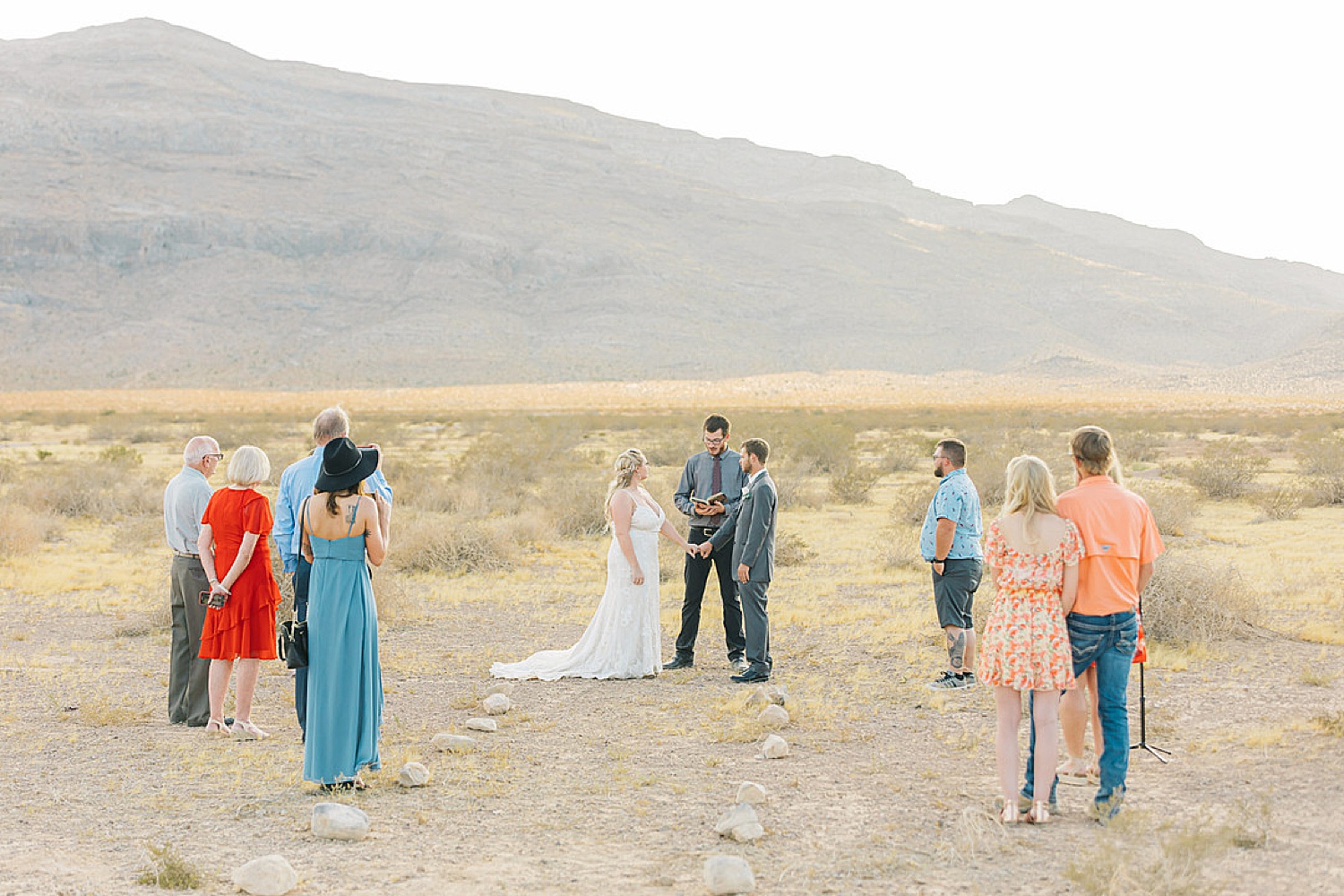 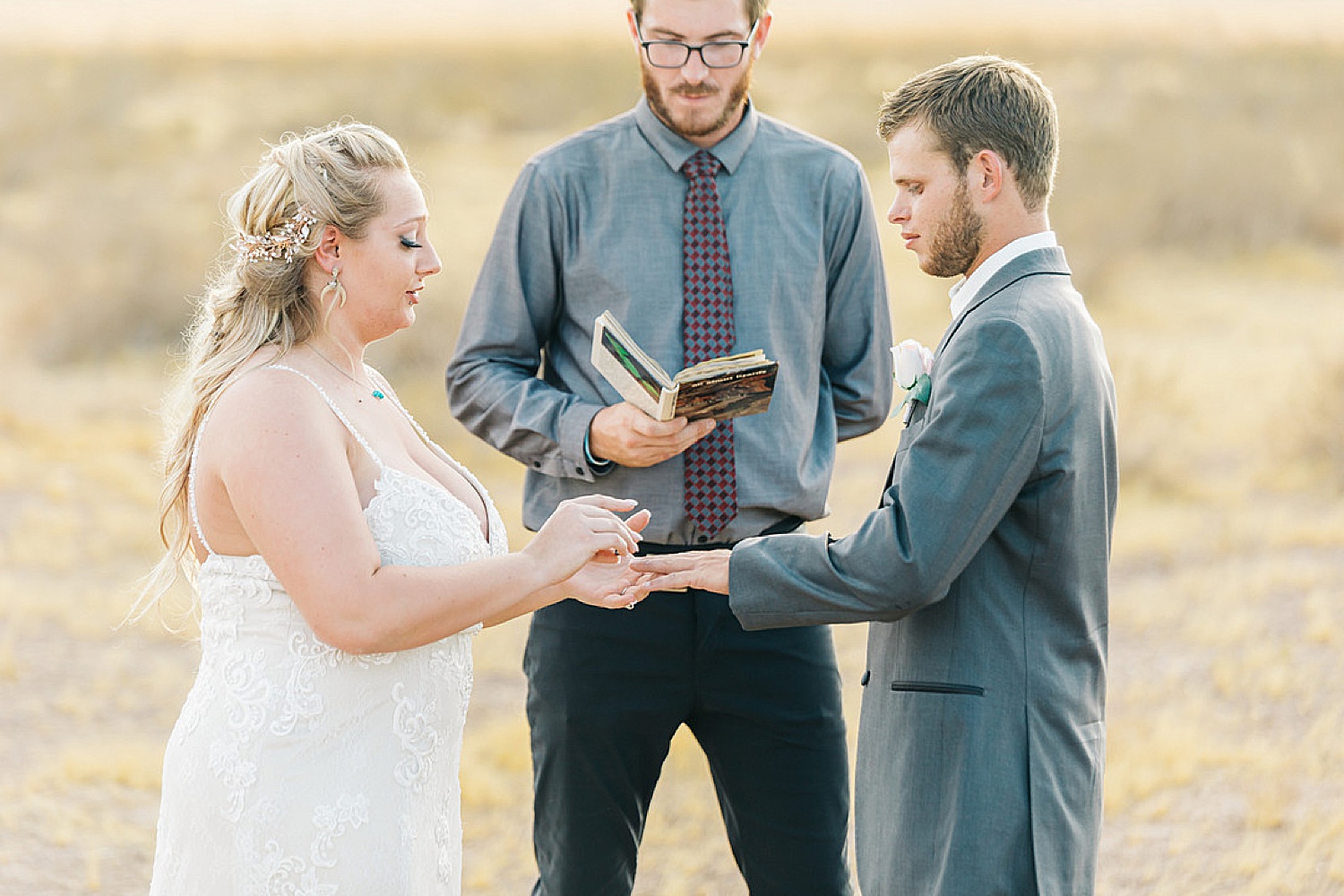 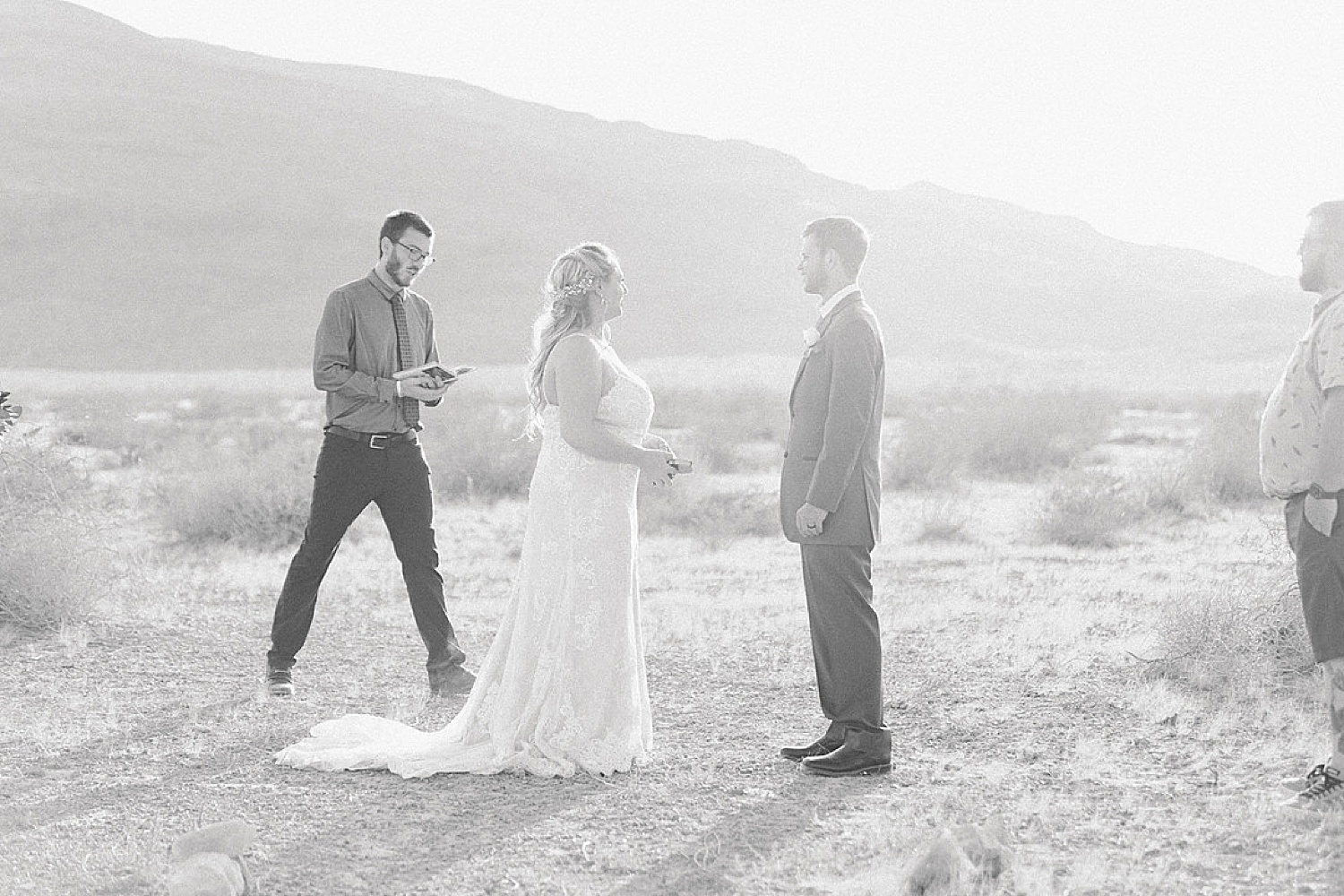 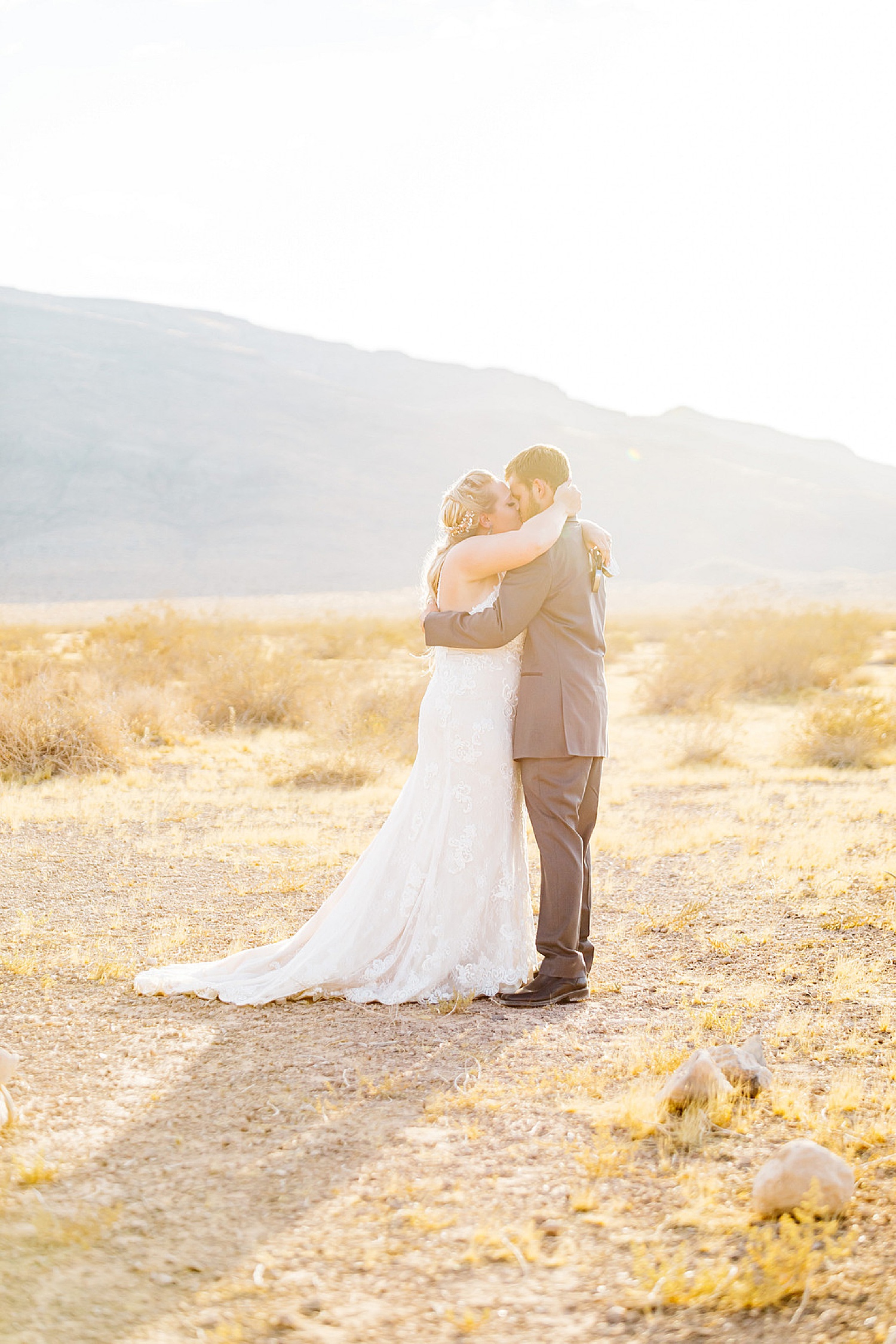 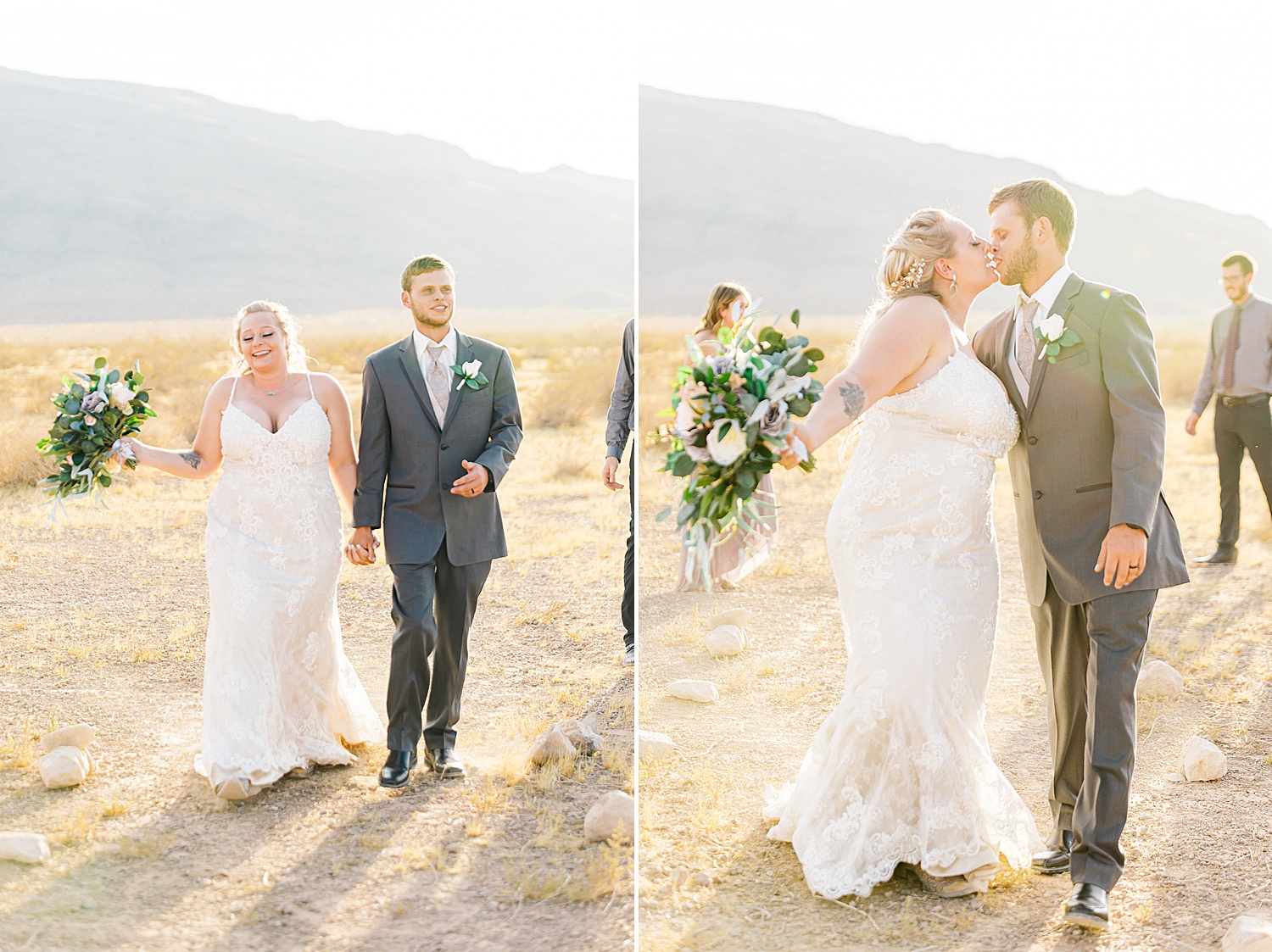 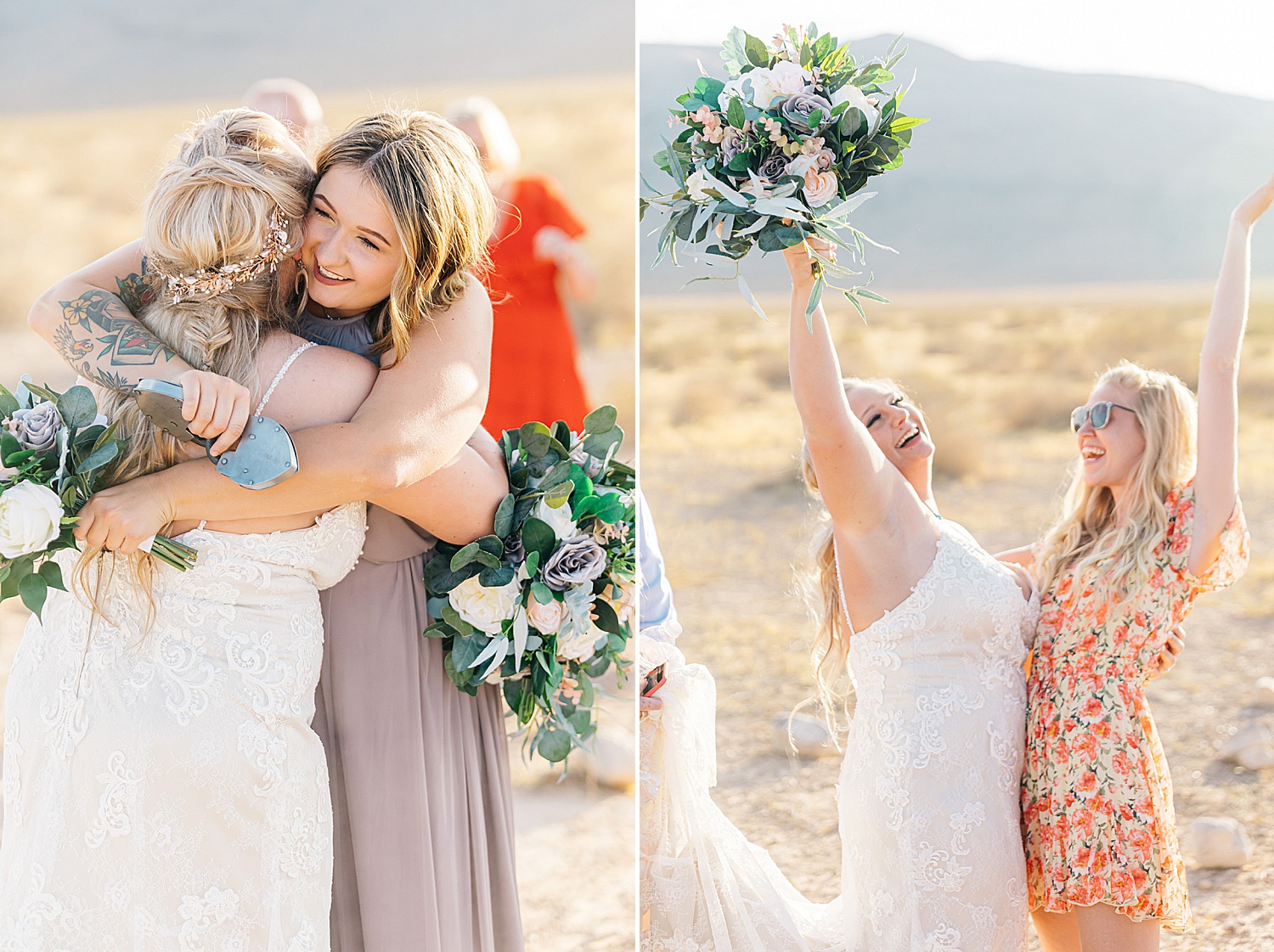 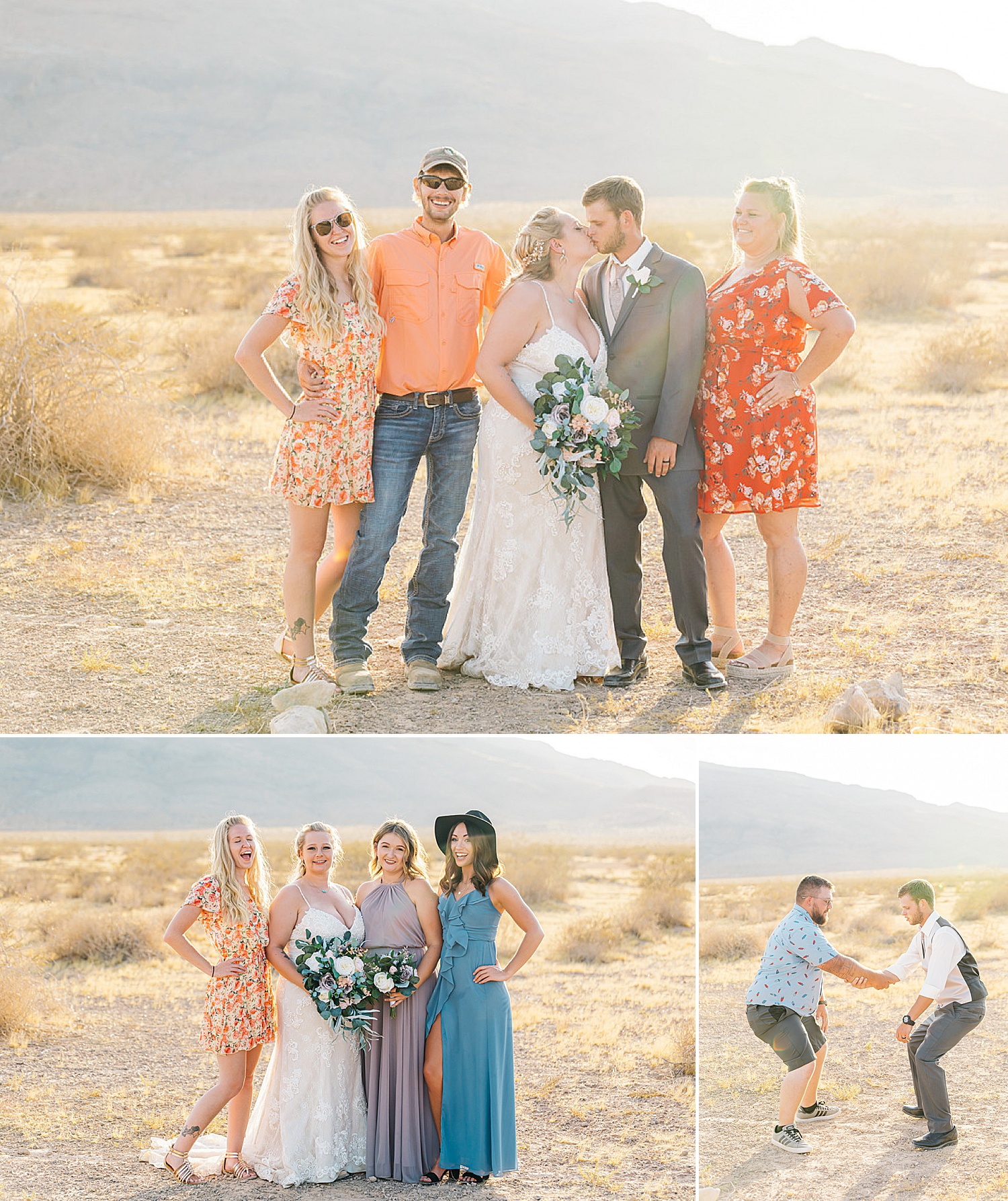 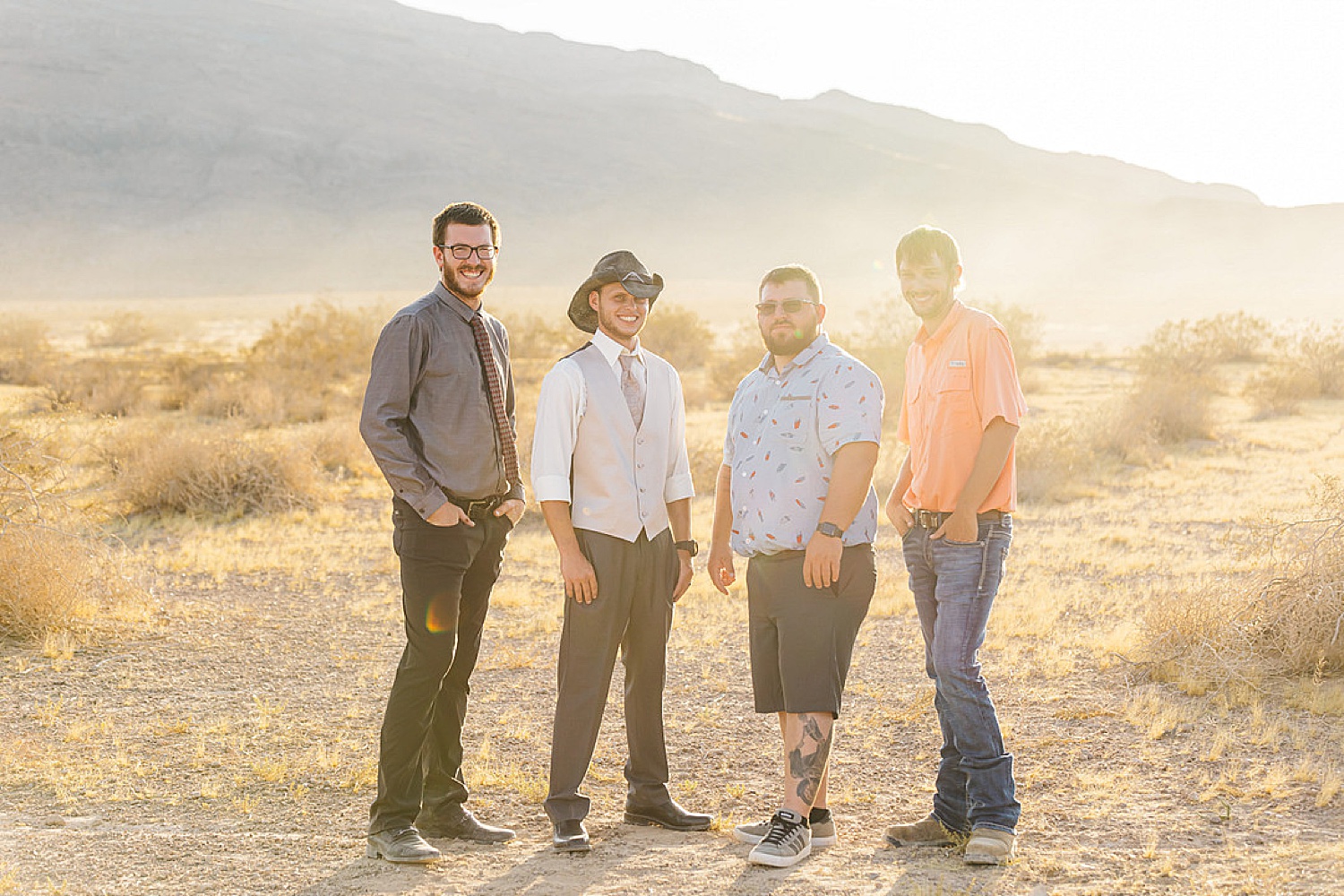 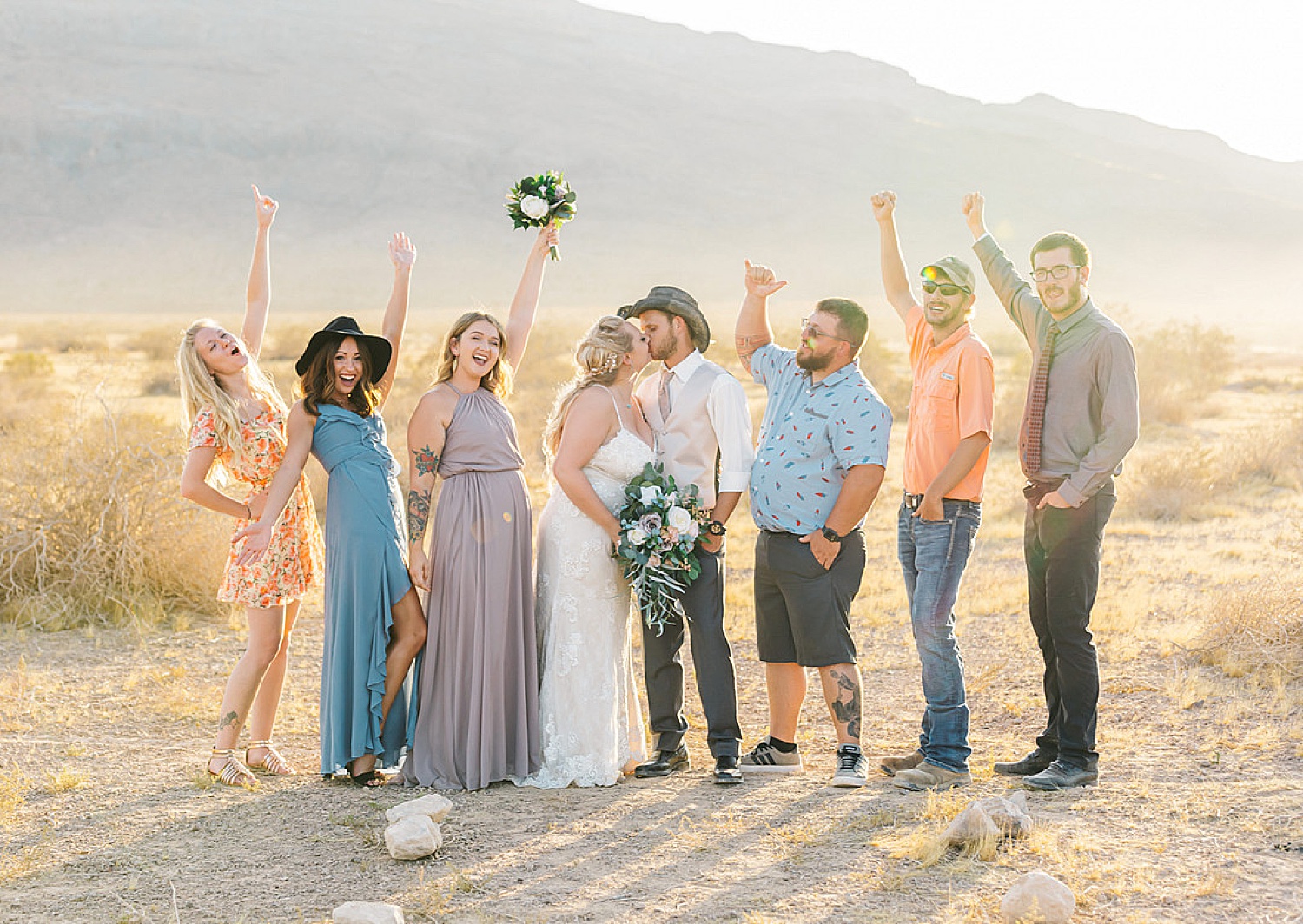 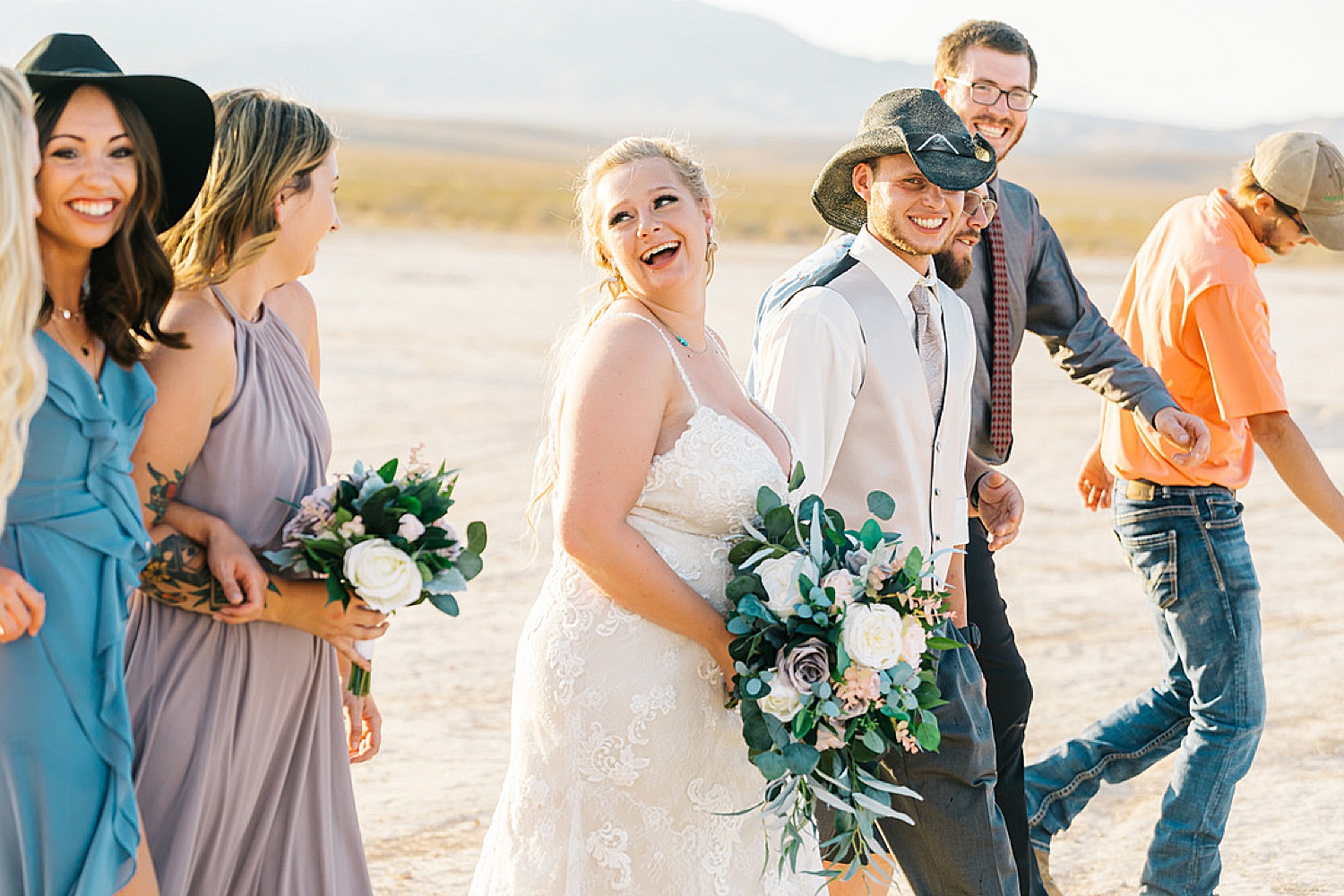 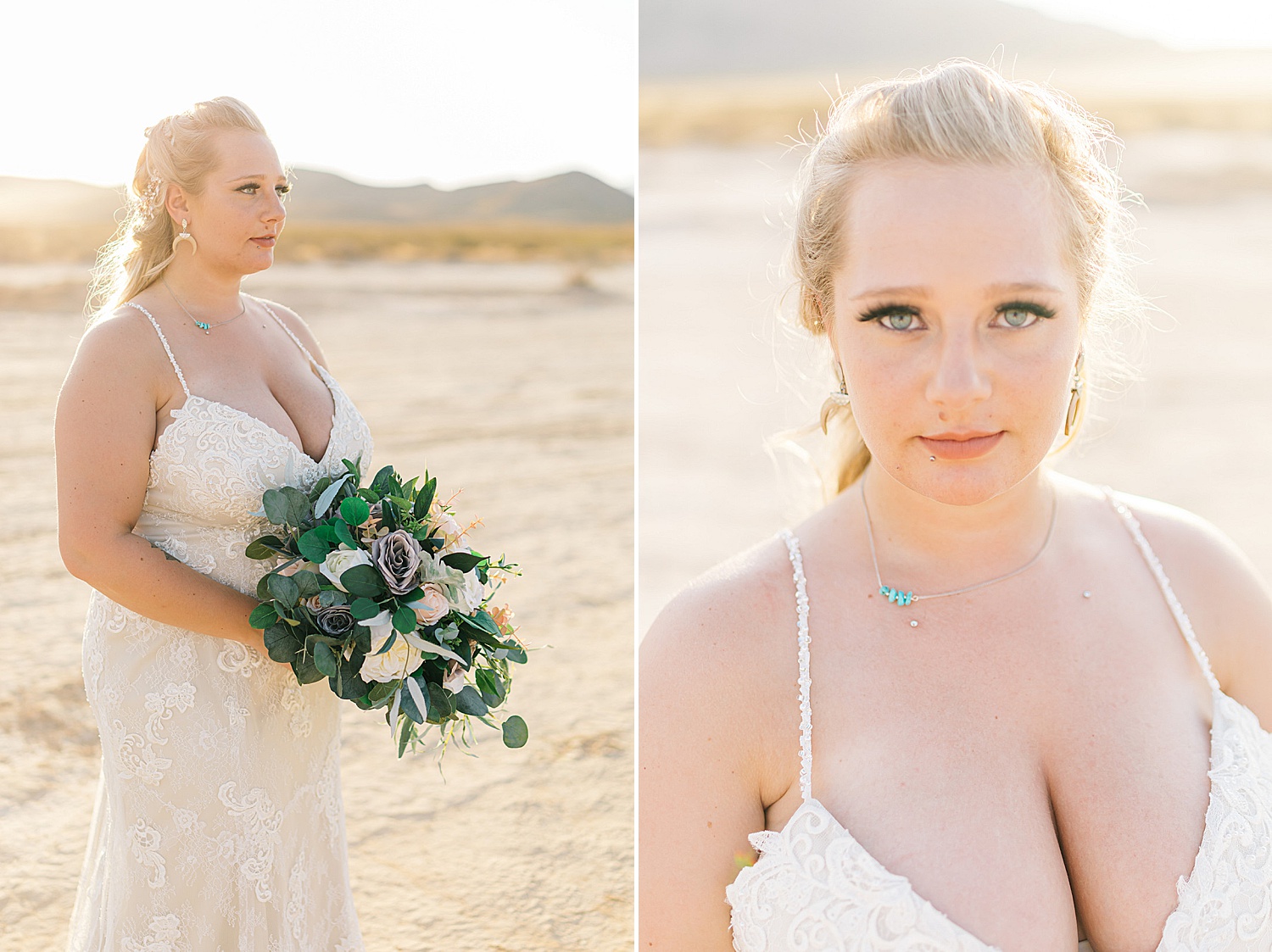 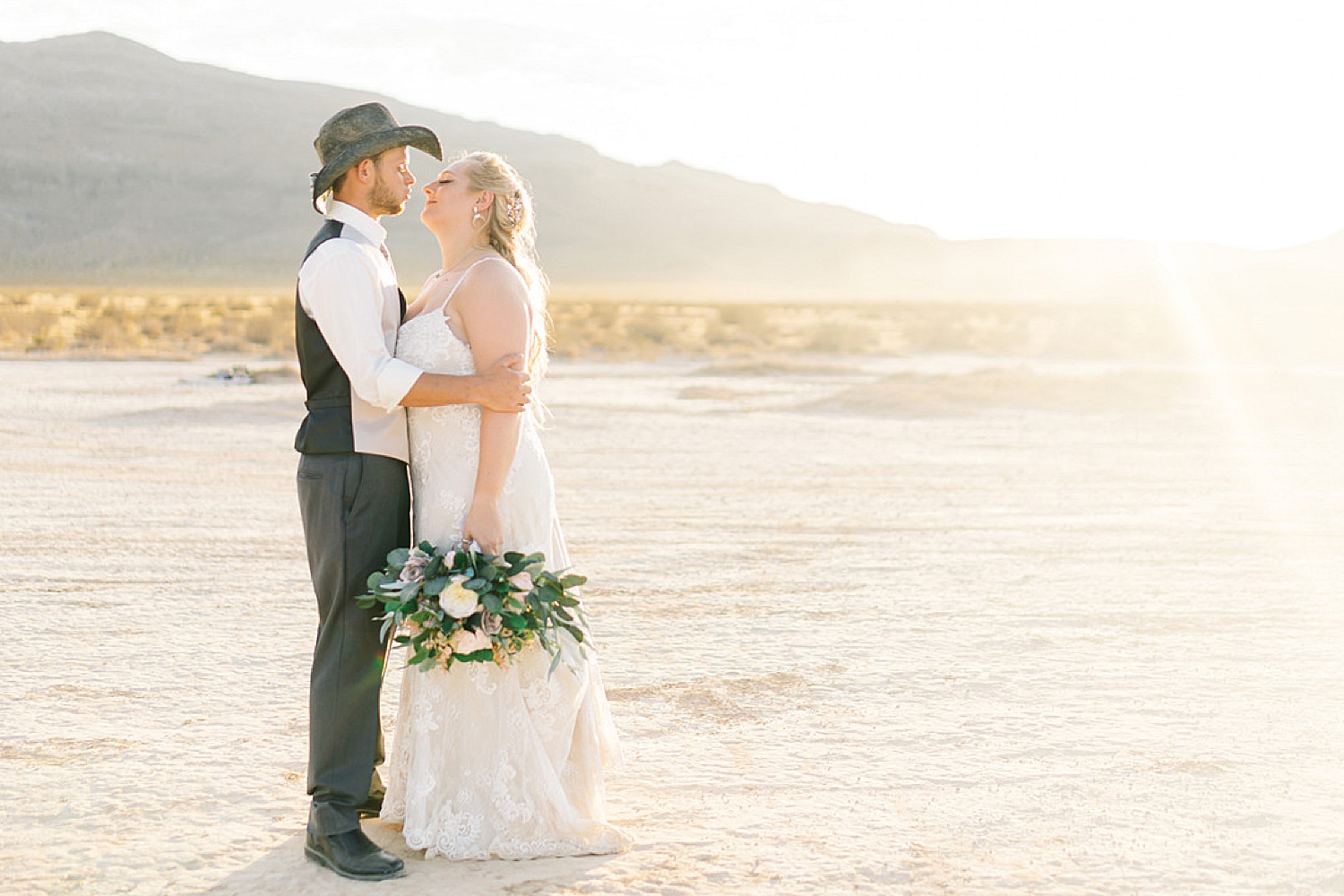 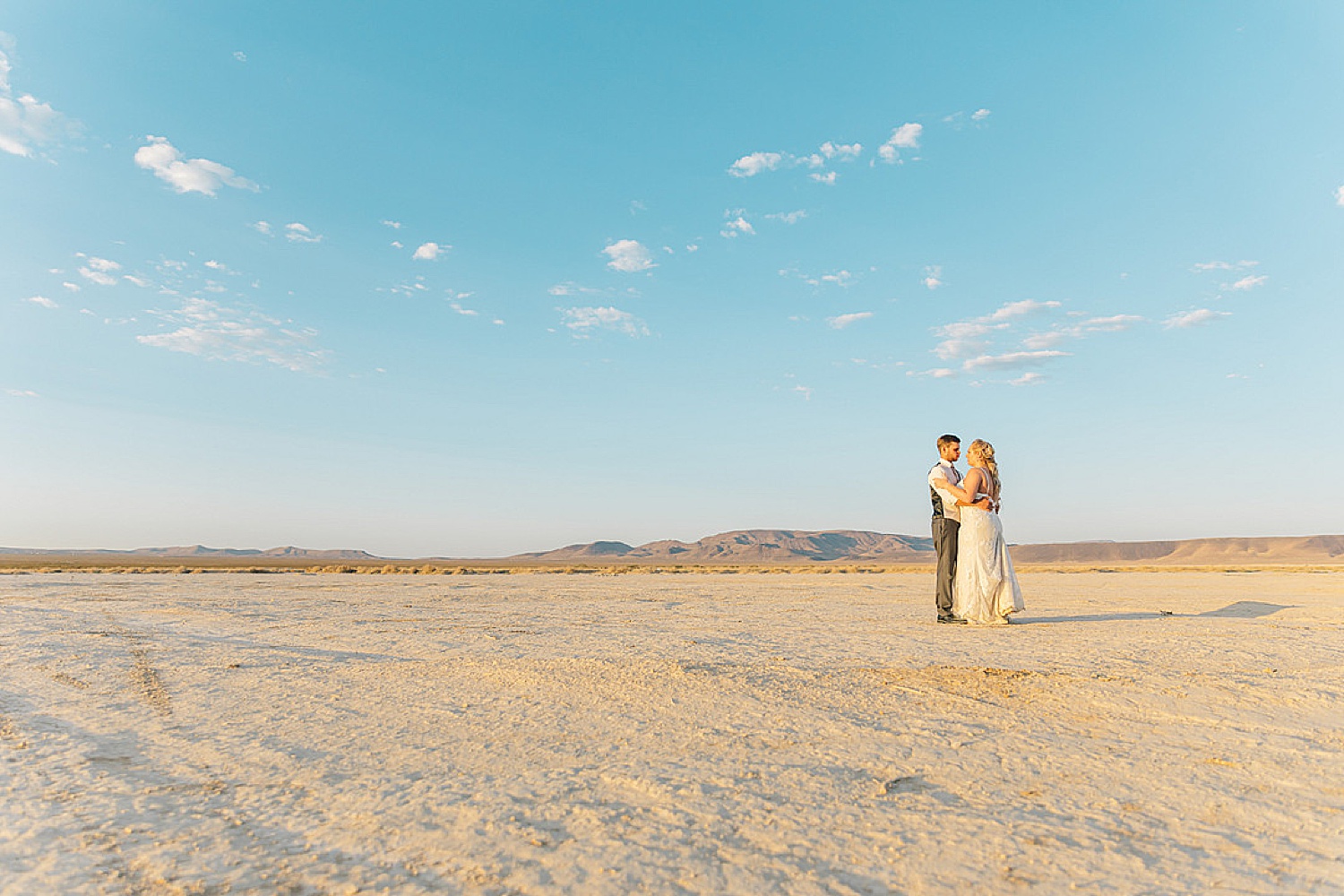 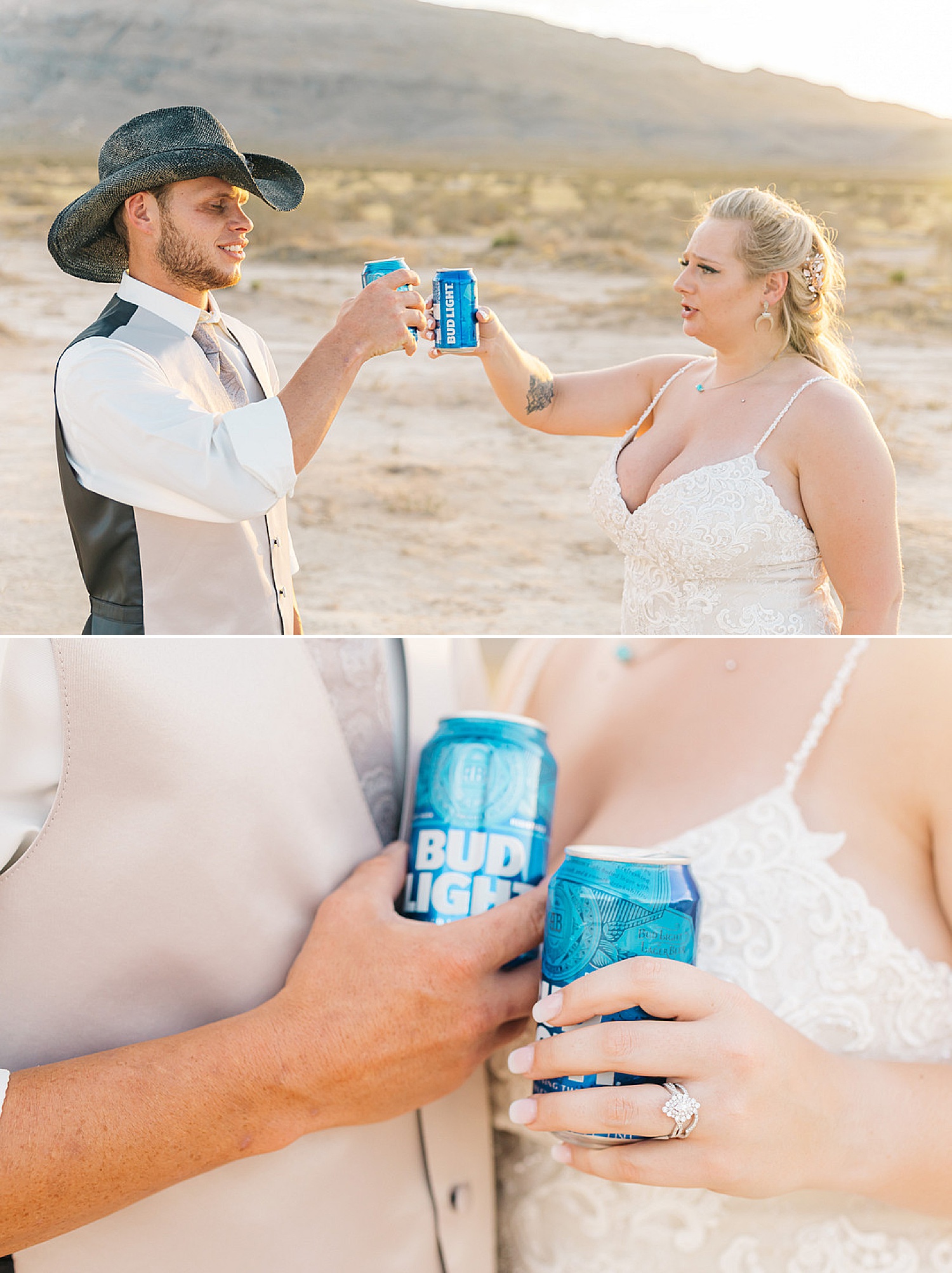 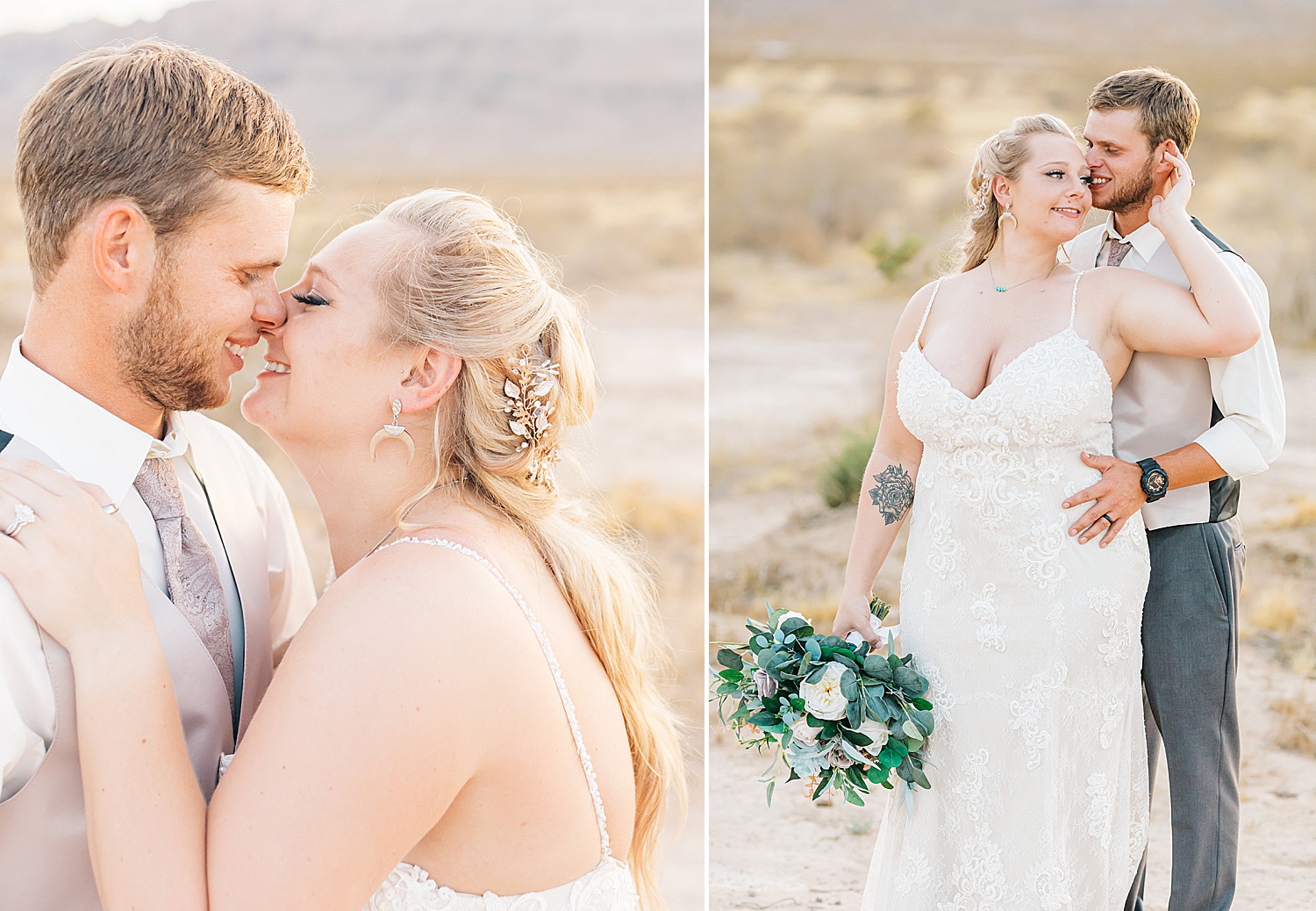 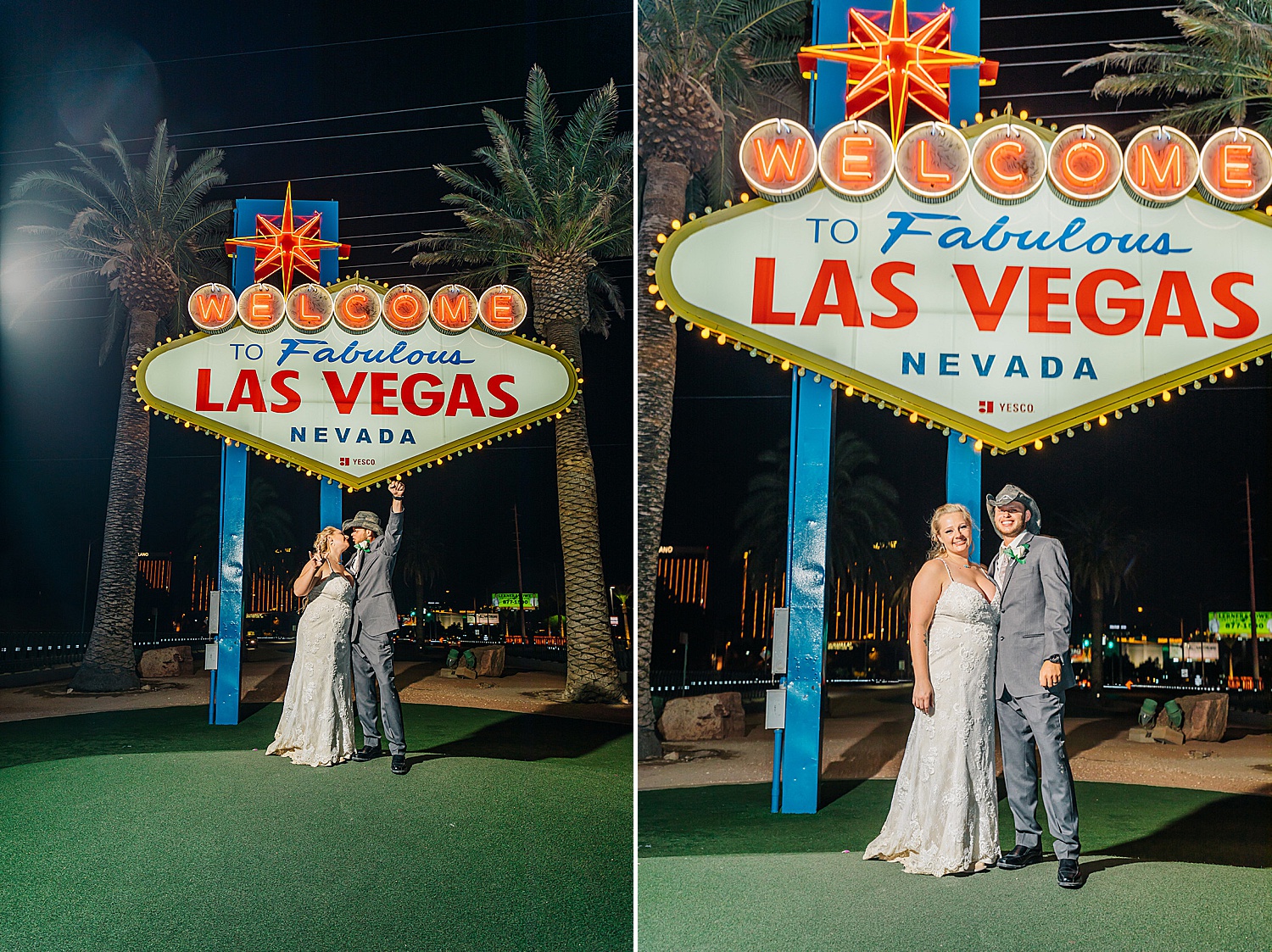 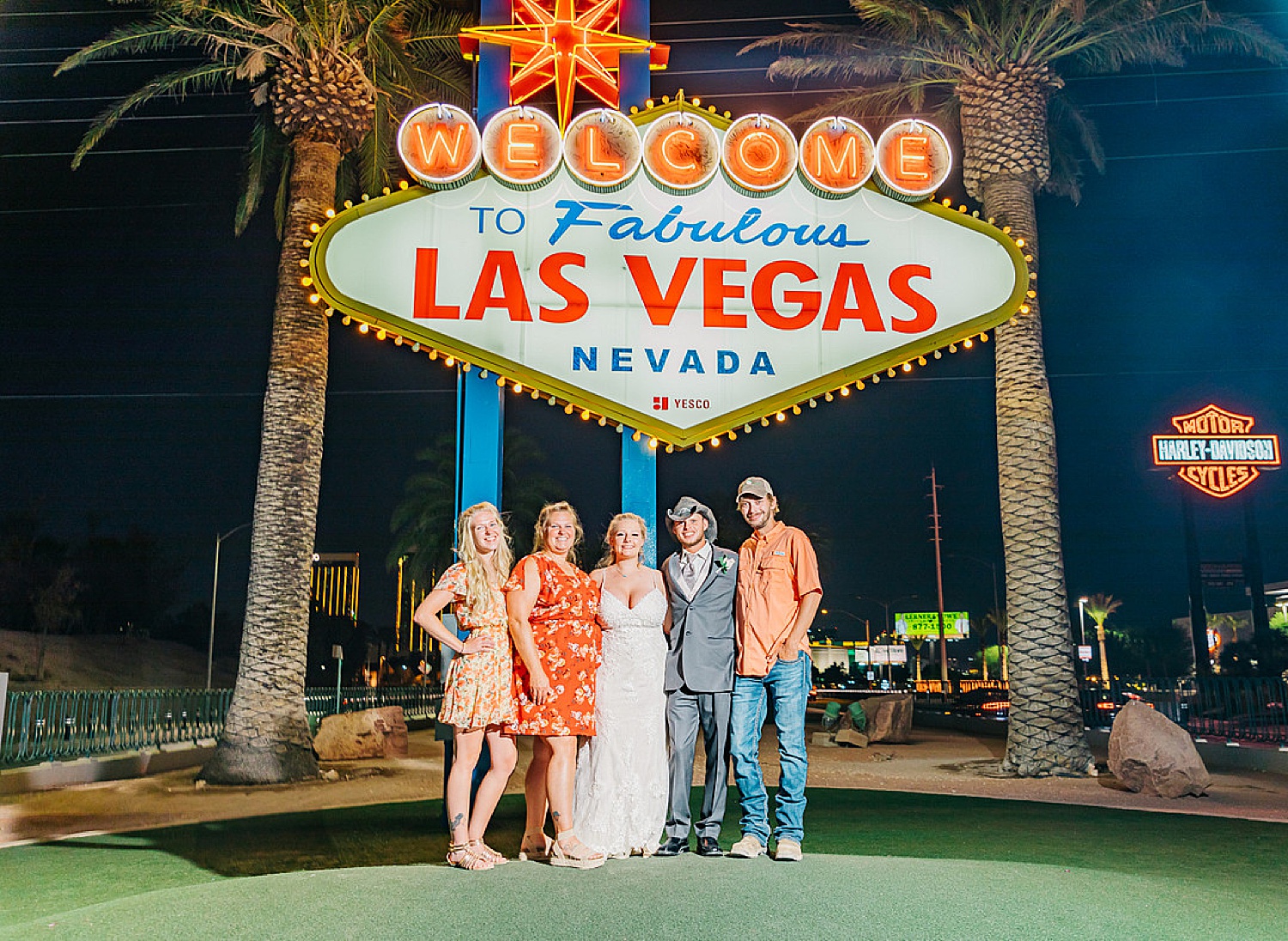 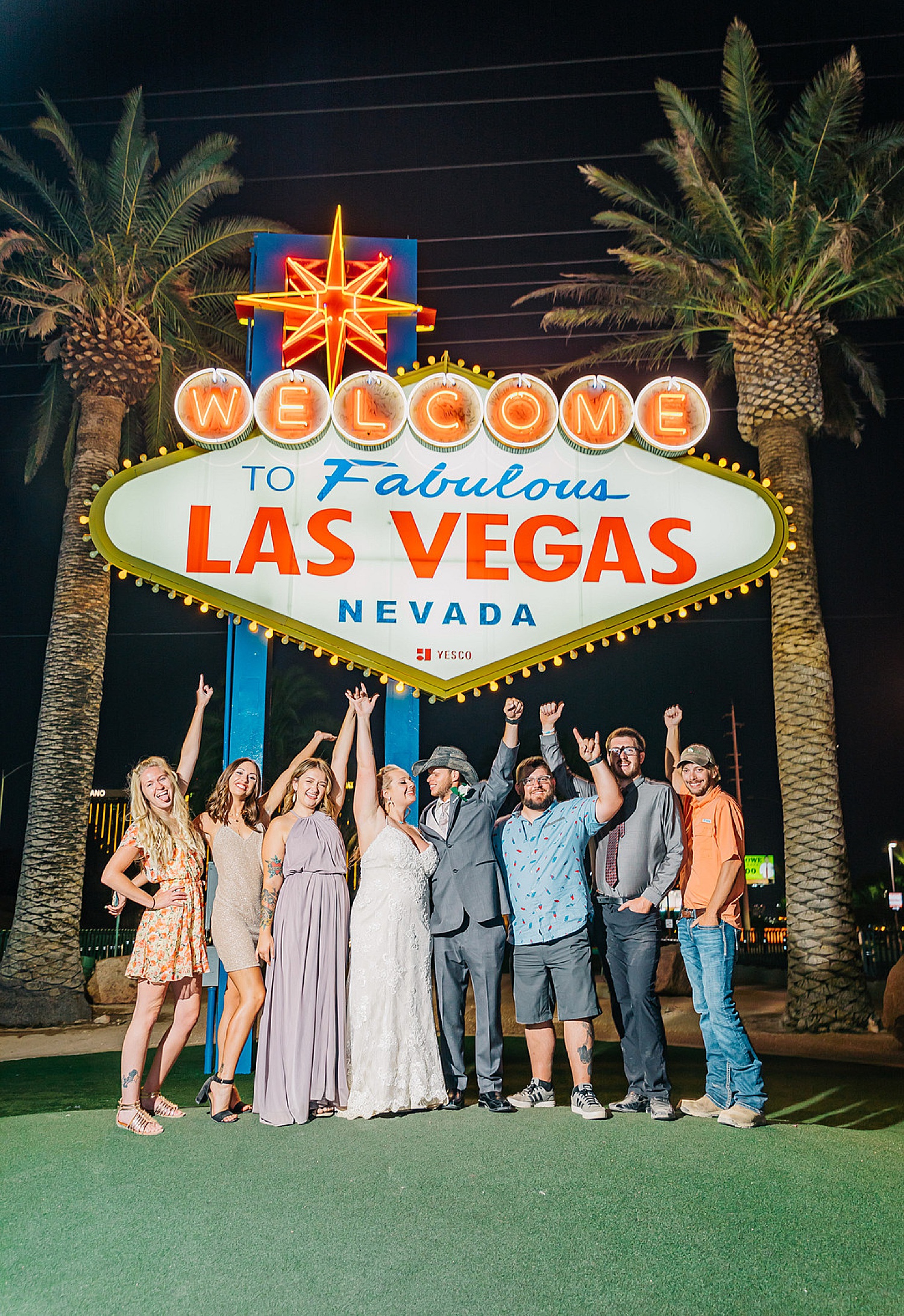