Anicka and Ryan had the most intimate and meaningful elopement there is. They reached out a few weeks after getting engaged last summer and told me they wanted to get married the following fall in Charlevoix, Quebec. I helped them plan and execute the vision they had for their wedding day by finding the perfect location for their ceremony far from the crowd, helping them with all their elopement logistics, and allowed them to focus on themself during their big day.

They started their elopement day in a stunning cabin in the woods of the Malbaie, they were finishing getting ready and face timing their best man, Ryan’s best friend, that wasn’t able to make it to their wedding because of Covid.

We then hit to road to get to the ceremony location I helped them find. Even though it was pretty rainy in the morning, nothing could have predicted what we got while on the way to their elopement, heavy fog. At some point I was really worried we wouldn’t get any sort of view from the mountain top location they had chosen. But against all, we continued our way to their location and we had the best surprise when we got there. The fog was going away and we could even see their elopement ceremony location from the parking lot.

We then moved on to their ceremony. Anicka’s sister was actually their day-off officiant and only had 3 other guests to witness their union, Anicka’s parents, her sister’s boyfriend, and their newborn child.

They have a beautiful handfasting ceremony after which they proceeded to read their vows and exchange rings.

They then had a wonderful little picnic with cheese platers, charcuterie boards, and of course black beer since they are both huge fans of it.

We then hiked down to spend the last few minutes of daylight by the Saint-Laurent river. Anicka and Ryan sat by the water and reread their vows to each other while their dog Suko was running around on the beach. They also enjoyed some tea since it was something they loved to do together as a couple.

After sunset, we got back to their cabin and everyone helped to set the table for diner. They brought their family dinnerware set from home for the occasion and sat around to enjoy a delicious meal by Chez Truchon a local caterer.

After diner instead of doing a first dance, Anicka and Ryan sang «I can’t help falling in love with you» at the ukulele together.

Scroll down for photos and some Q&A with the couple! 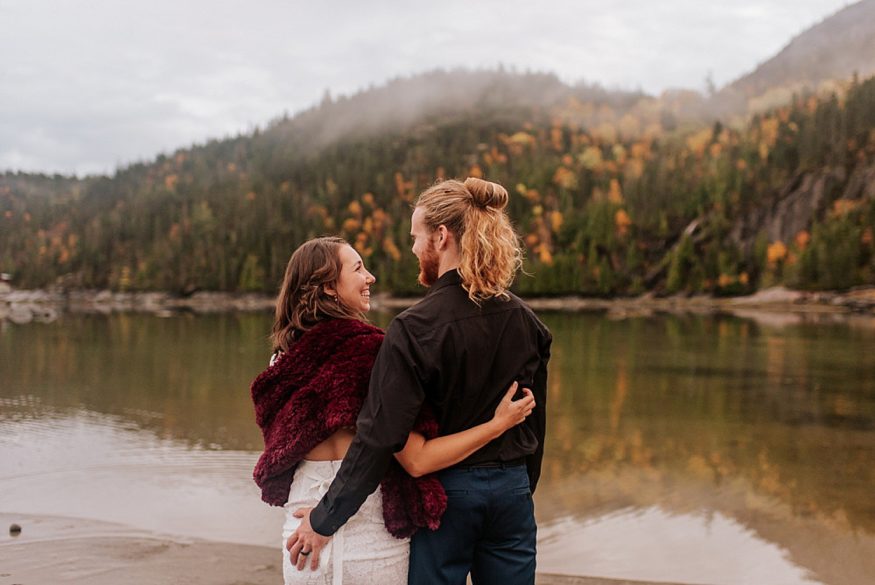 Q: How did you meet? Tell us about the proposal.

A: A few days before going on vacation to the Gaspé, I cleaned the garage and threw away many small pieces of wood, without knowing that Ryan was making a ring for me, so he had to go and find the said ring in the wood bin from the garage! While visiting Les Jardins de Métis in Gaspésie, Ryan was looking for something on the ground and refused to tell me what it was. Monsieur had the ring free in his pockets and obviously dropped it into the lawn! After long minutes of looking for the ring together, I saw it and told Ryan. That’s when he proposed, knee on the ground. The ring was too small to wear on the ring finger, so I put it in my pinky. The story does not end there. At the end of the day, we watched the sunset on the beach. I couldn’t resist the urge to put the ring on my ring finger. As it was too small, it was impossible to remove, and painful, my finger swelled visibly! We had to run to the car and use a steak knife from our camping kit to … cut the ring … All’s well that ended well, we kept the ring and then inserted a small stone (which we found on a Gaspé beach) in the crack. 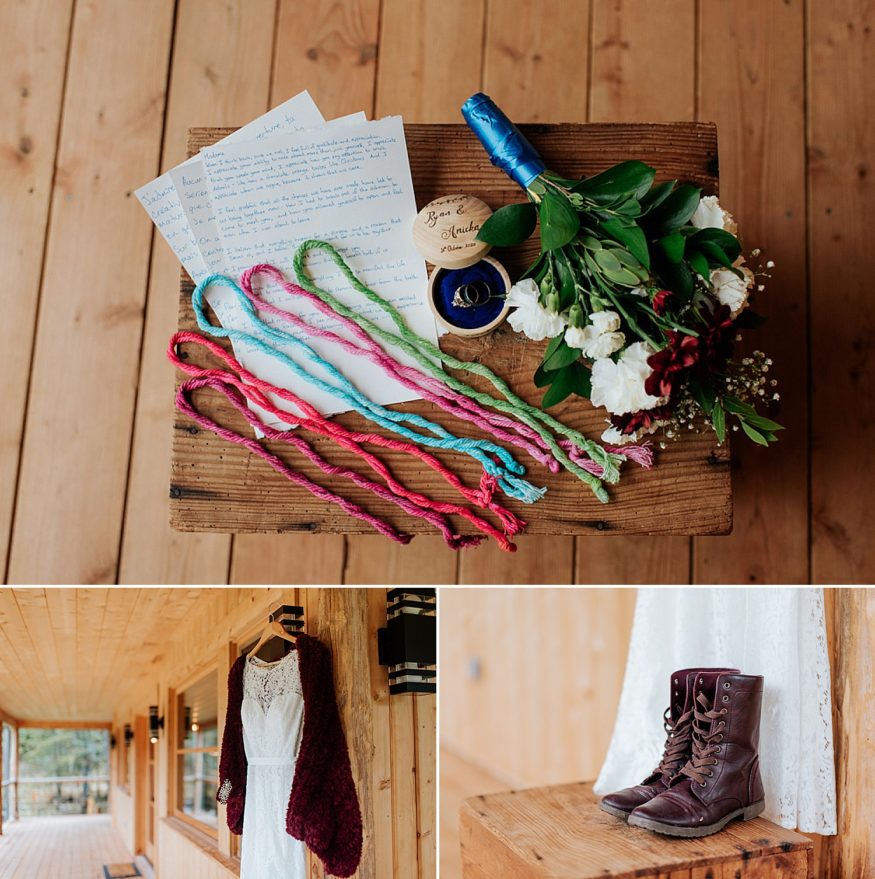 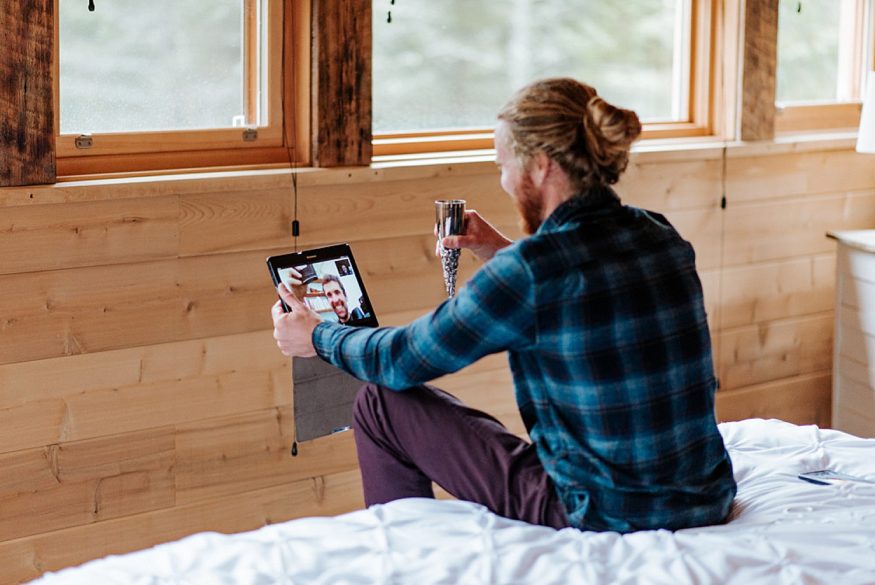 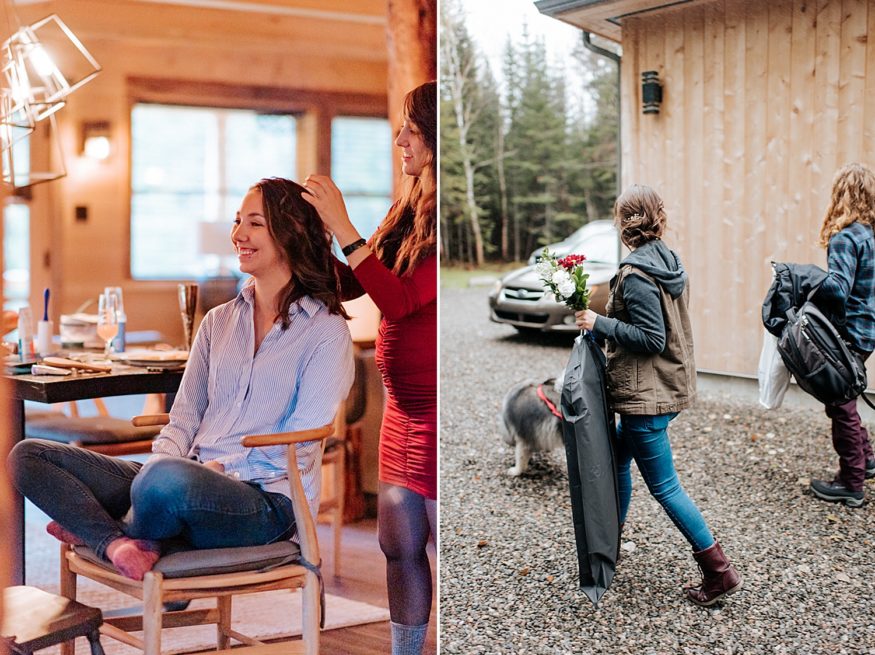 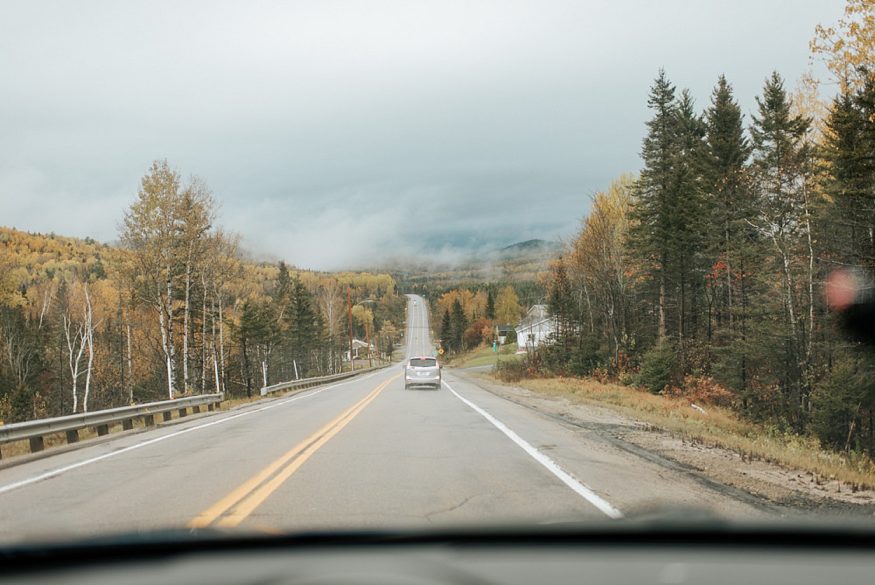 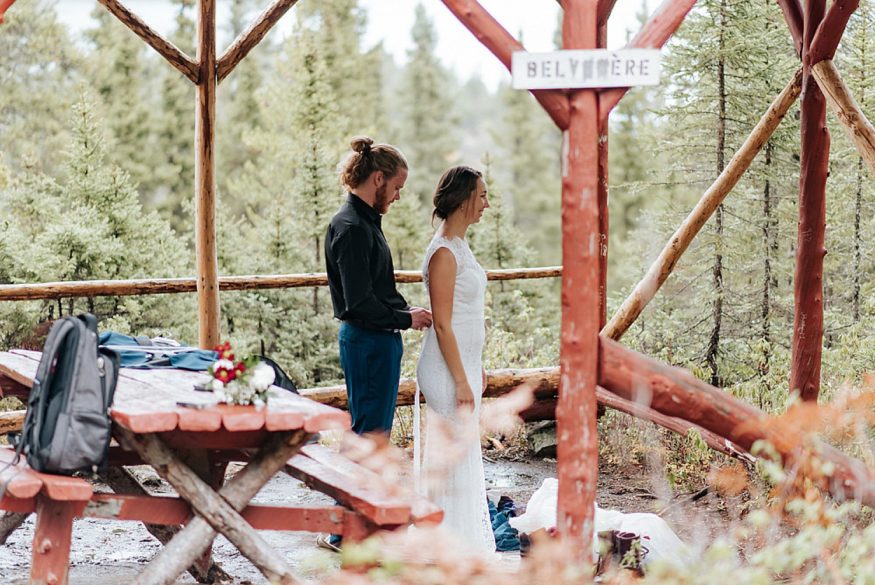 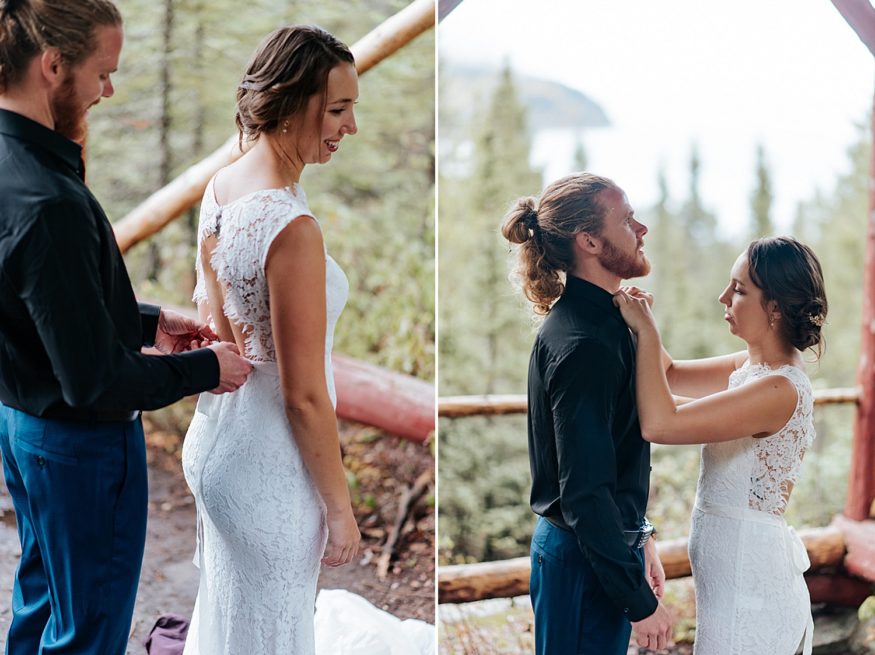 Q: Tell us about your wedding! What was the inspiration behind your day?

A: 1. When we got ready together next to our ceremony spot. We shared such an intimate moment surrounded by this gorgeous view of Charlevoix. It was like we were the only ones left on this earth. We exchanged some moments of laughter and complicity mingled with the excitement of the approaching ceremony. 2. The ceremony itself was very meaningful to us. Since we had customized it together from A to Z, we were able to put our flavor to it, use words that had a particular meaning for each of us. Making our ceremony bilingual was a challenge, but I think it looked even more like us. We had prepared our ritual together and it symbolized the values ​​that we wanted to put forward in our union. The exchange of vows was very emotional as was the exchange of rings. 3. The tea time on the edge of the water gave us a moment of rest and privacy after so many emotions. We were able to relax on the water’s edge, have our tea (it’s a little ritual in our couple as well). We took the opportunity to reread our vows (and translate some parts). Being able to run and play with Suko on the beach released the built-up tension and we returned to the cabin rested and fulfilled. 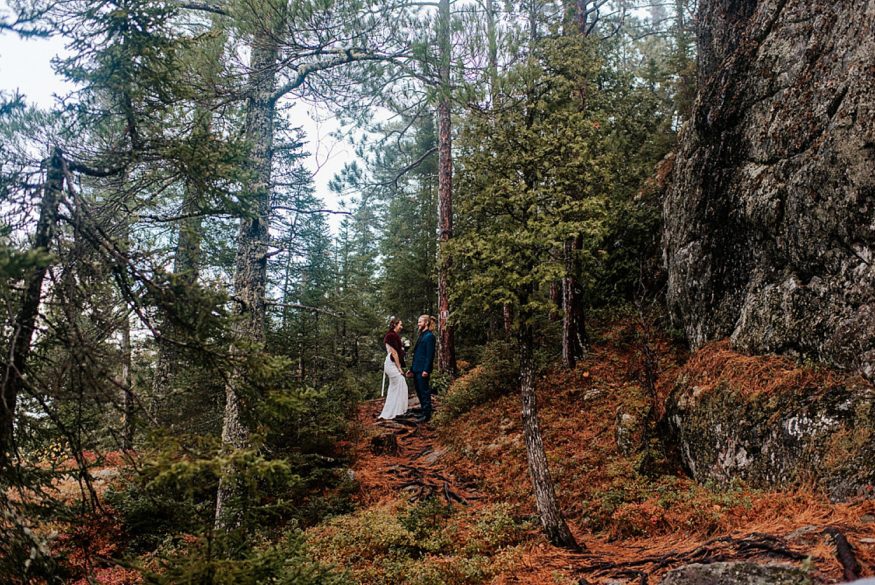 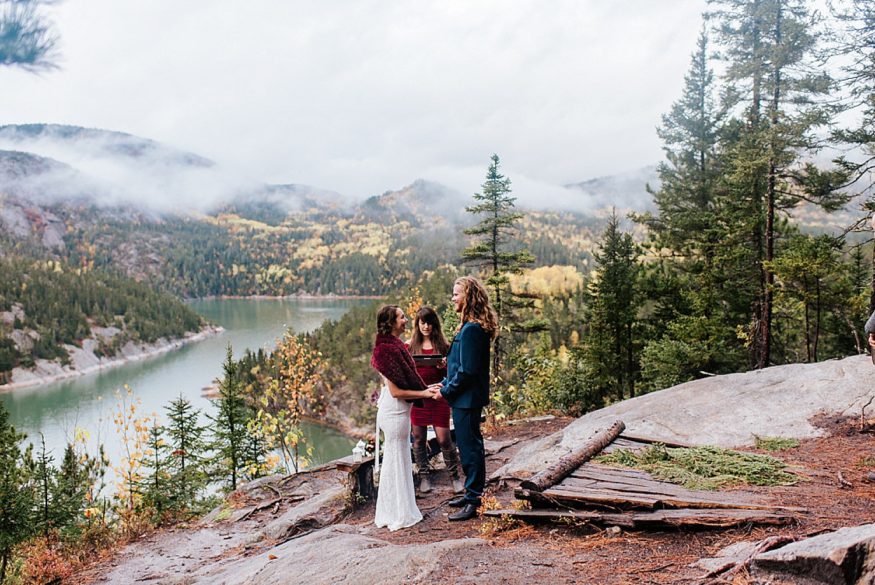 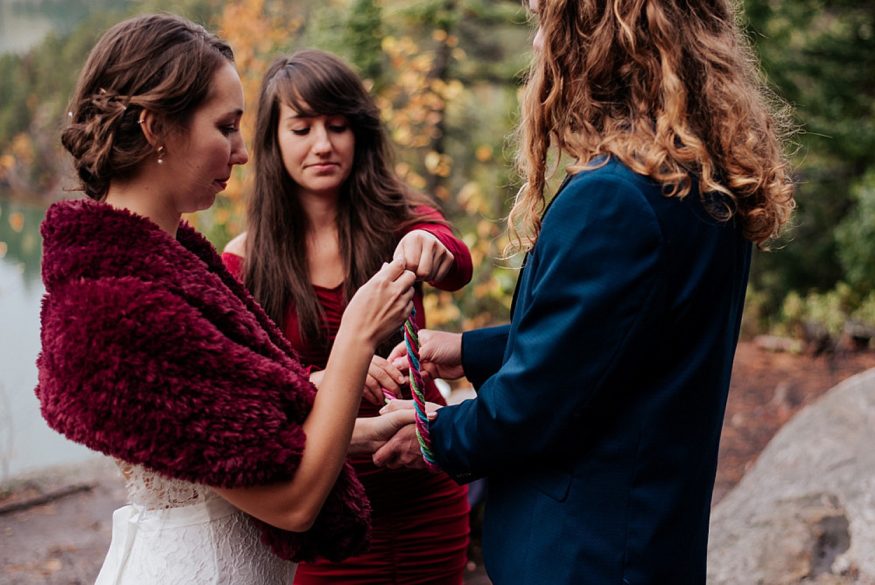 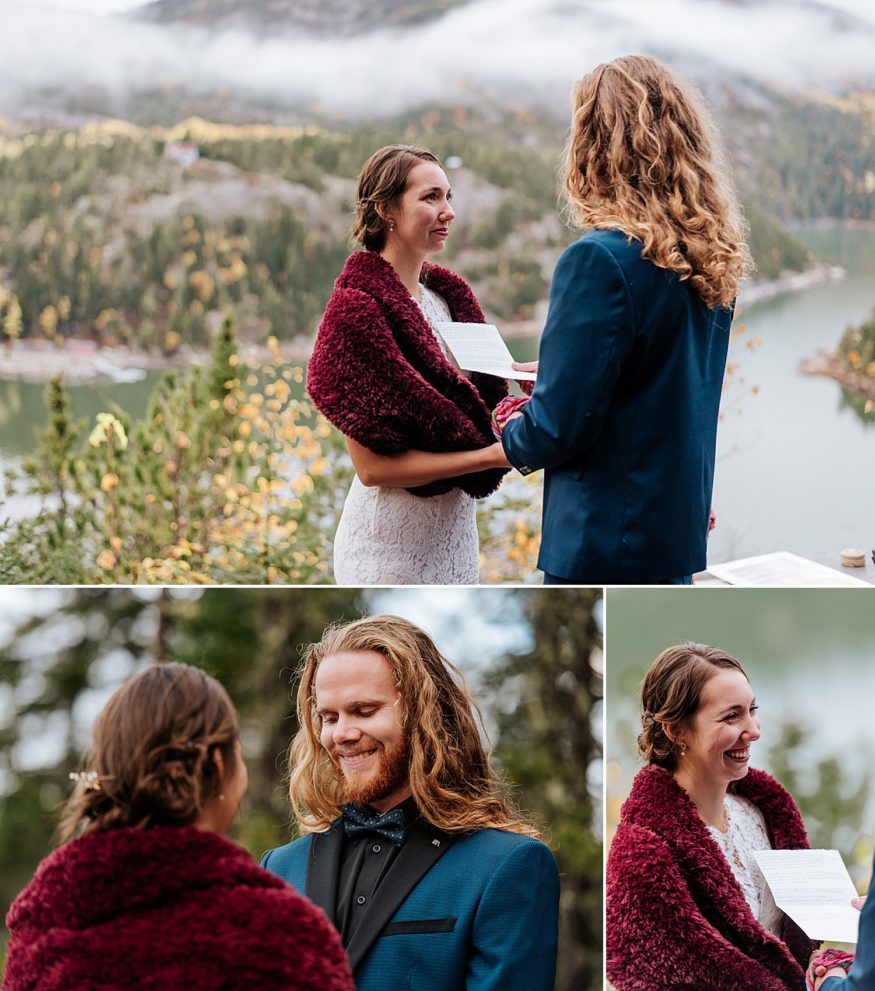 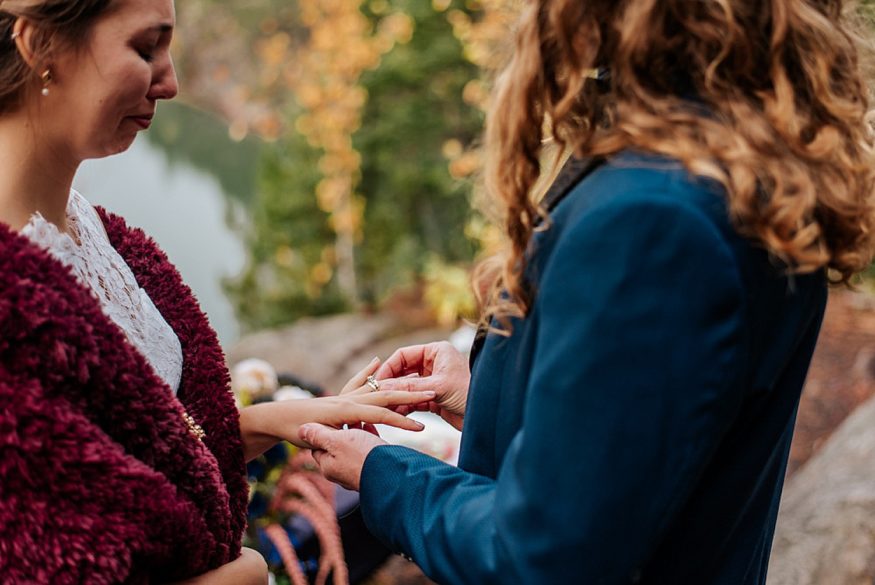 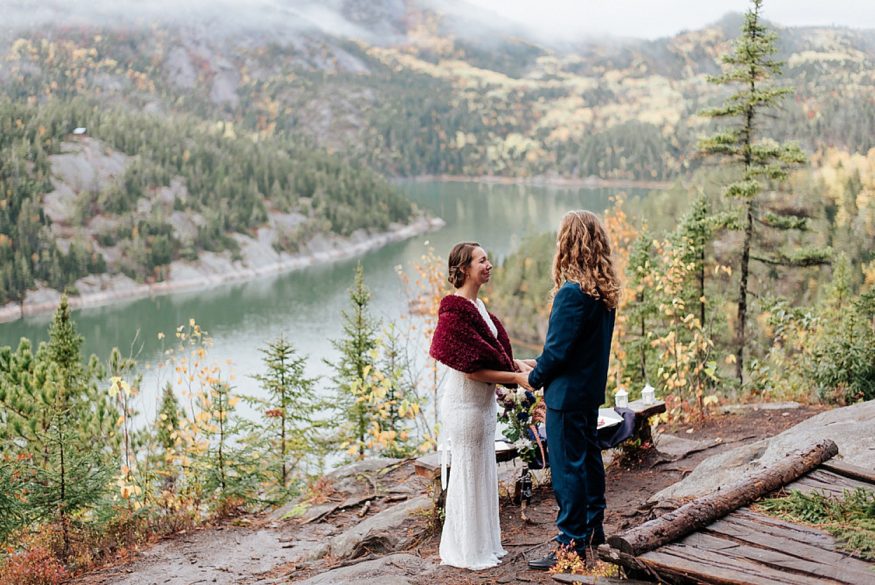 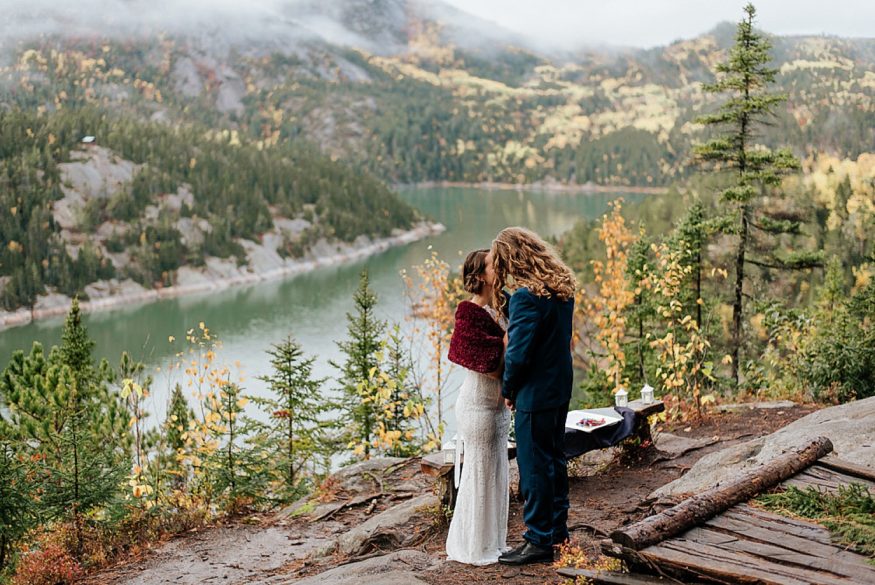 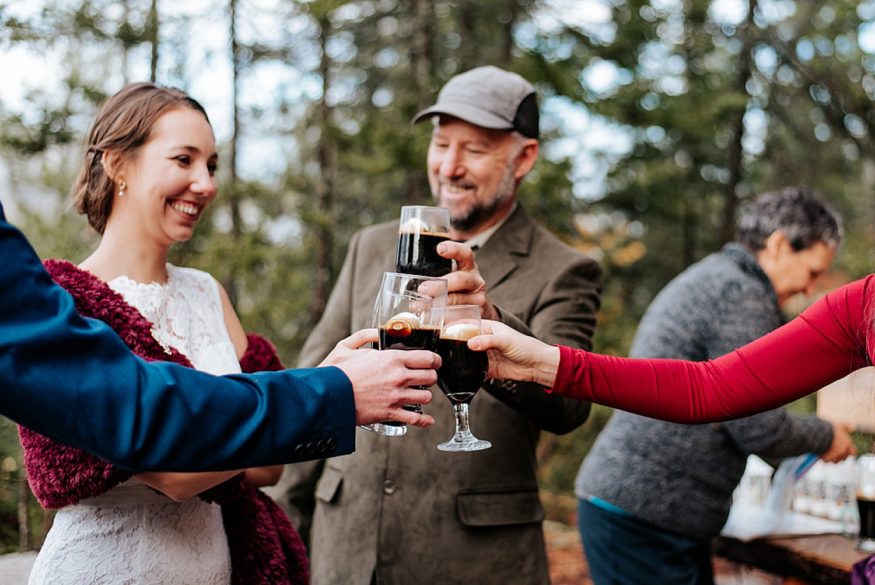 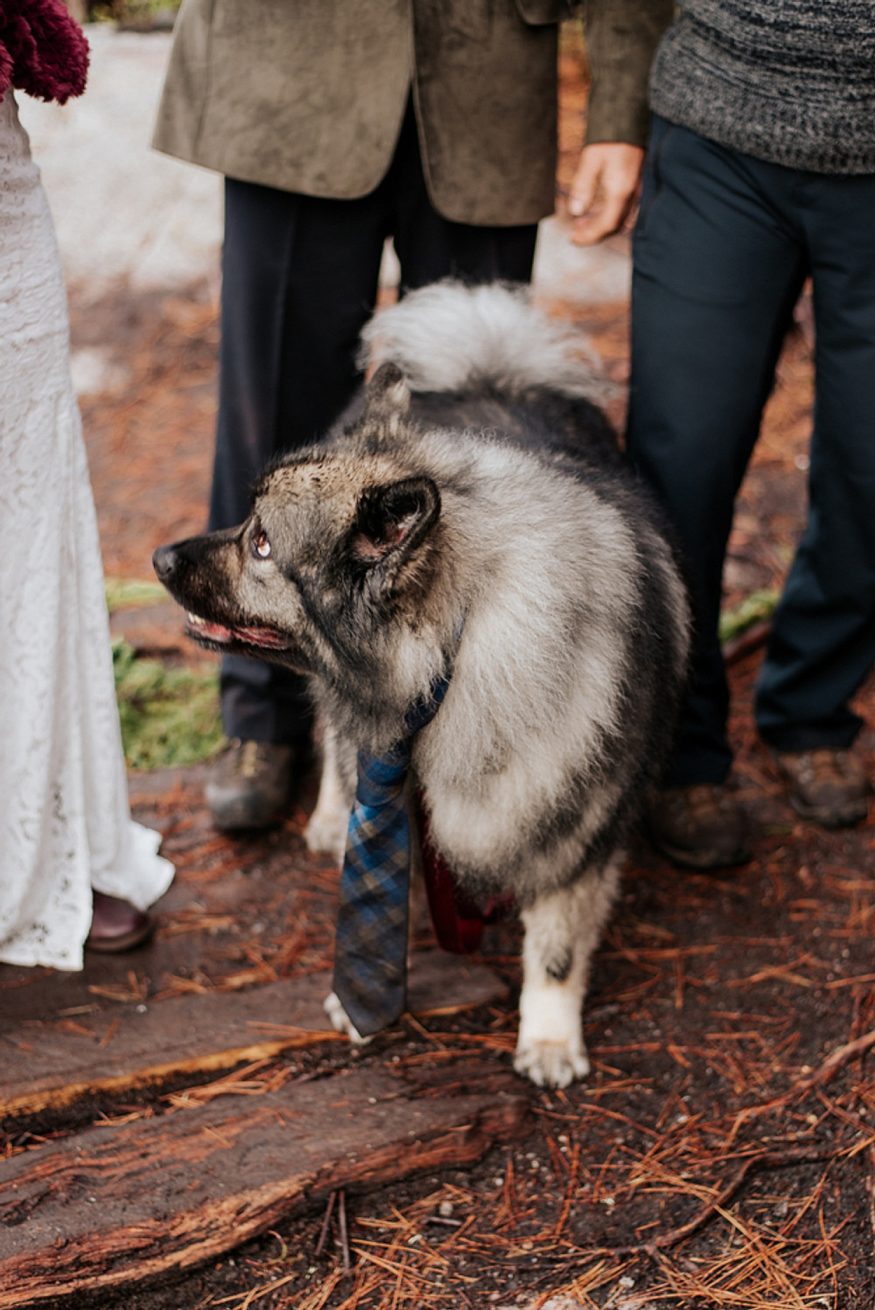 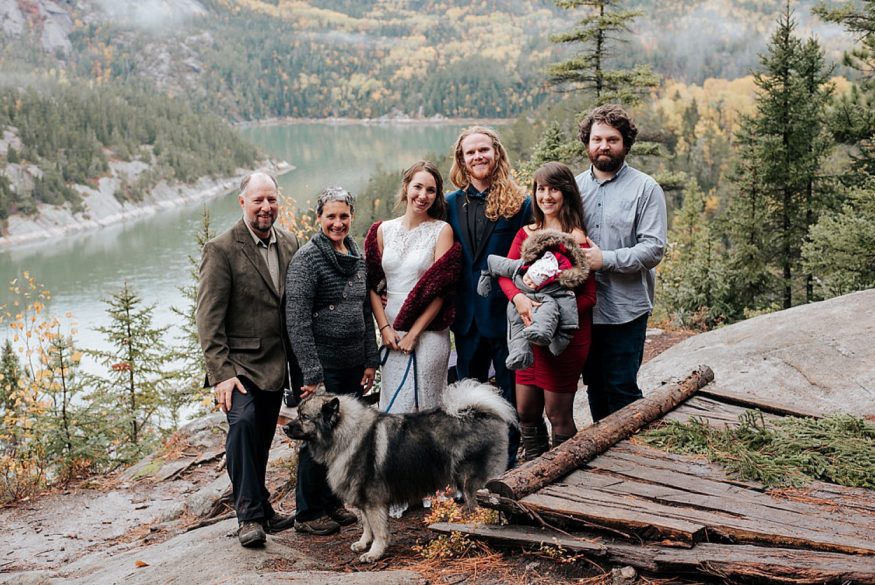 Q: Did you personalize the day in any way ? What were some of your favorite parts of your wedding?

A: 1. Wedding rings: I wore the wedding ring of my maternal grandmother to whom I was very close. Getting married with this ring was very important to me since my grandparents represent the ideal marriage that I have known. Ryan made a beautiful little personalized wooden box and this attention touched me a lot. 2. The Ukulele we sang our song with (instead of having the first dance) 3. The fine cheese platter that we ate on the mountain following the ceremony accompanied by a black beer. My sister made us a slate tray specially for the occasion. Since we love good food and beer, this little cocktail was perfect for us. 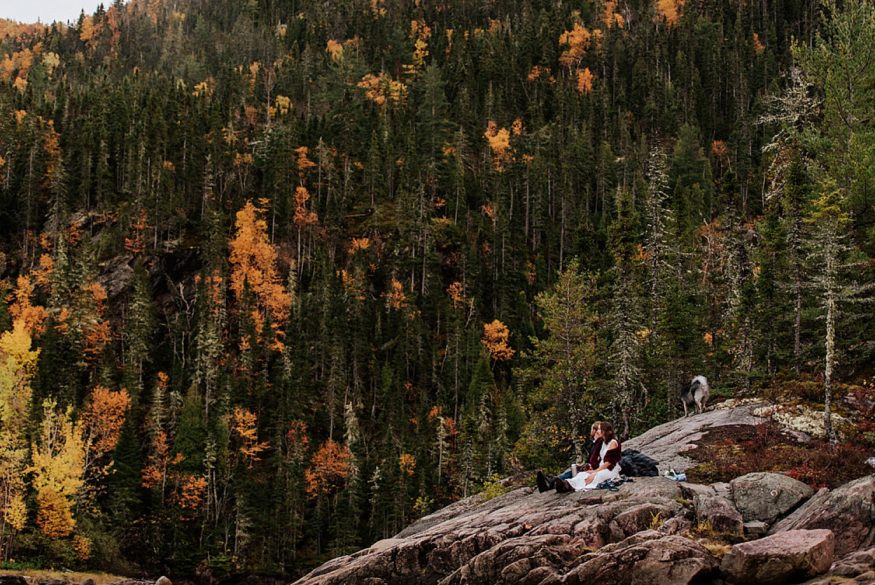 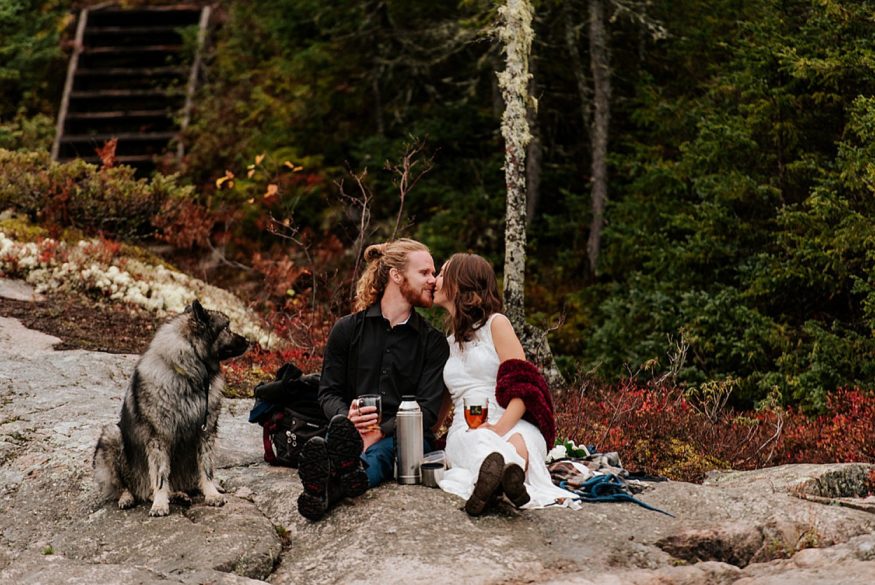 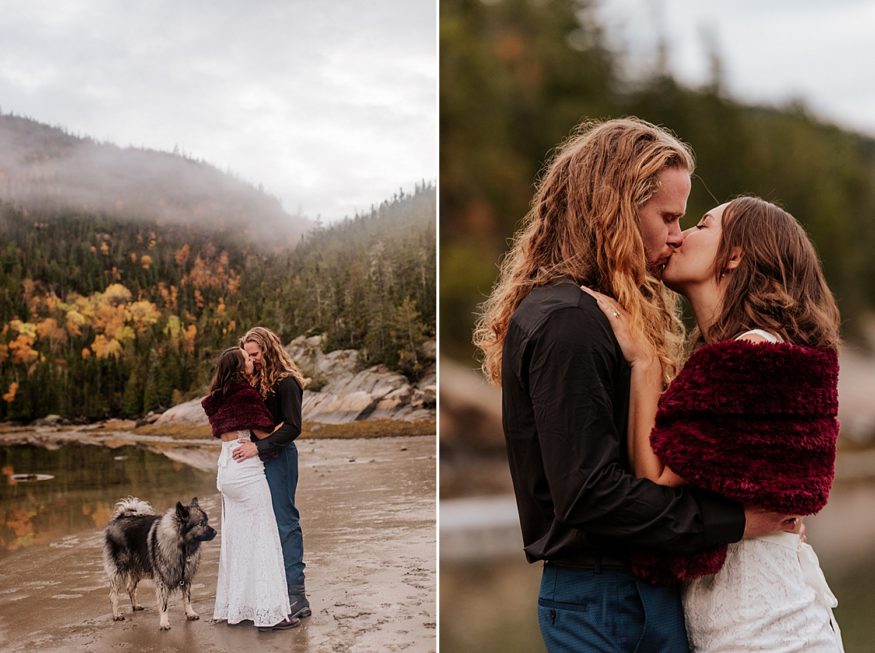 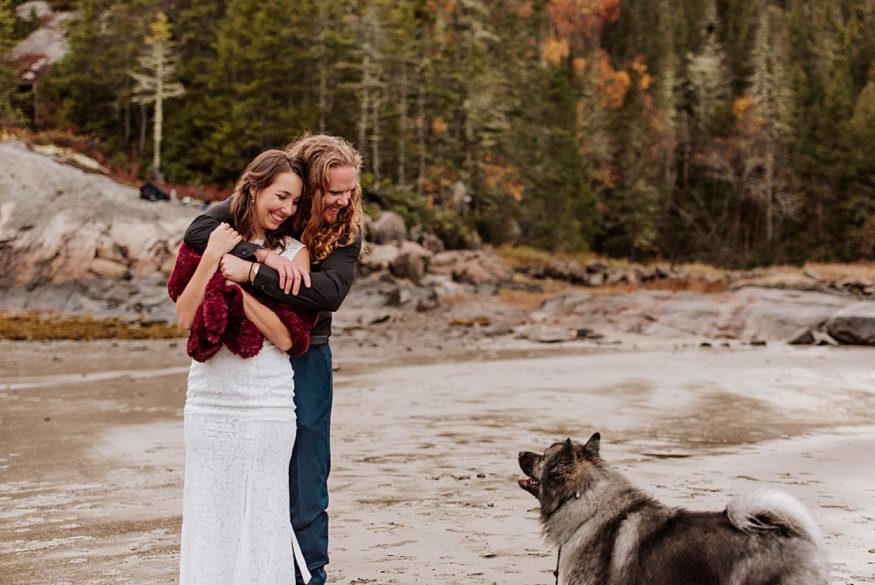 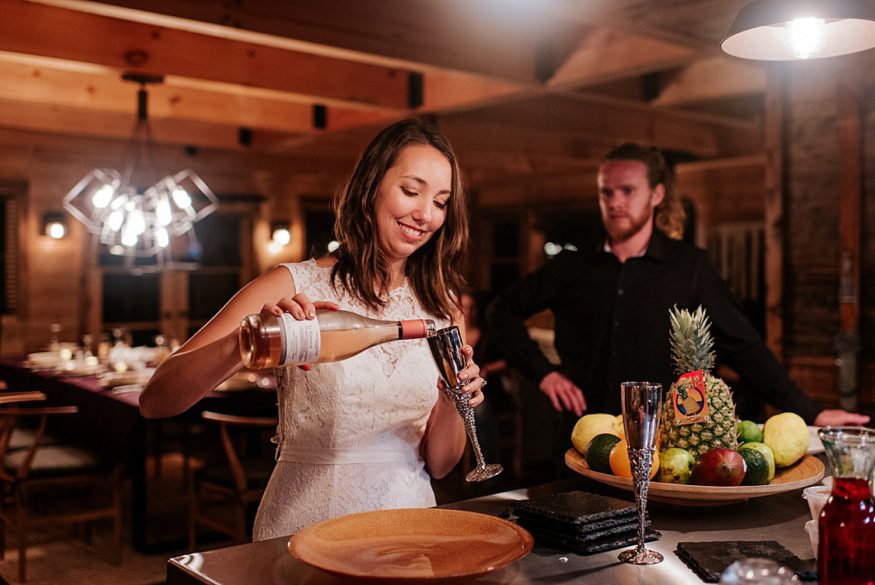 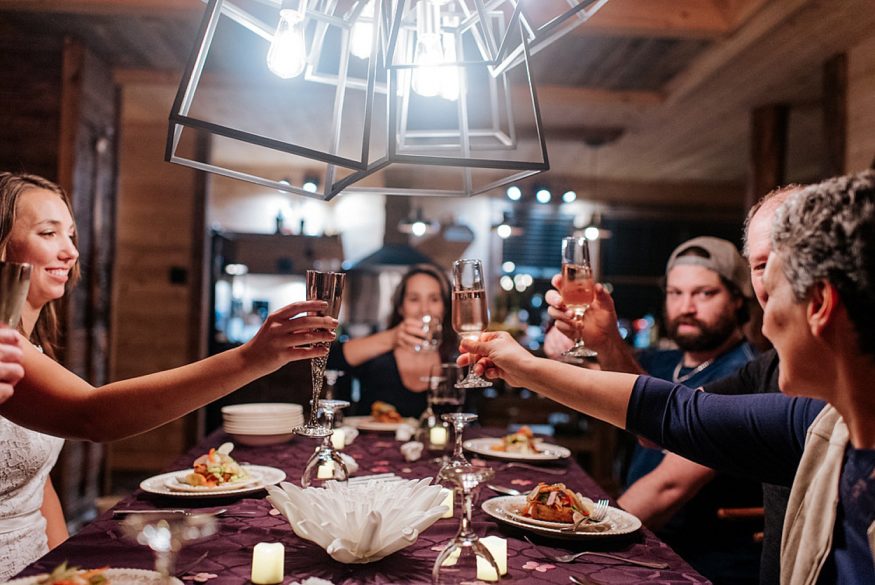 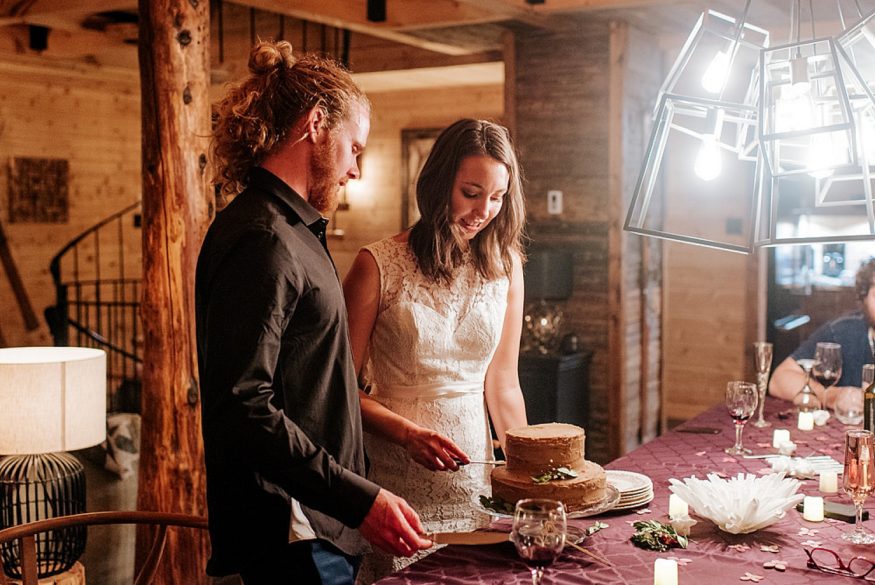 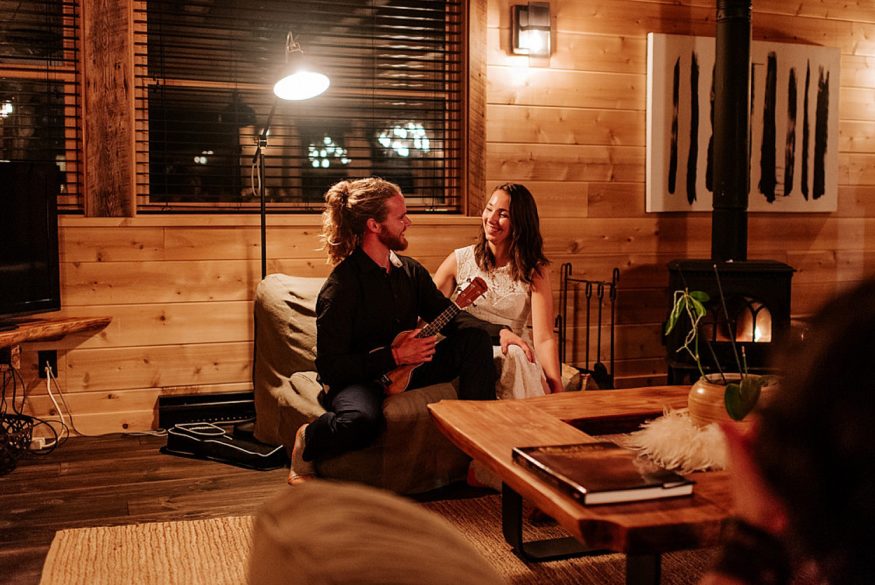