The moment I saw this elopement I wanted to share it. The love and smiles of these two are contagious. This is how much fun your wedding day should be!

Their photographer Traci provided the following information about the couple and their day!

“Meet Kamaile and Ash! These two met each other while Ash was stationed in Hawaii and Kamaile was living there. They have both lived in so many places in and out of the United States, but fate brought them together on the islands. They soon started dating and fell in love with each other. They soon moved their dogs and lives into one home back on the mainland as Ash was stationed elsewhere. Throughout their travel and adventuring they actually ended up proposing to each other three times! The first time they were camping in Oregon, where Ash is originally from, when Ash presented Kamaile with a beautiful gift of a post of what the stars looked like that night where they were. Kamaile simply replied with “we should get married,” and Ash agreed! Further down the road, they were camping in Sedona in their newly bought van, and Kamaile more formerly presented Ash with a ring to ask her hand in marriage. Who knew they would also get married in Sedona?!

On their elopement day these two had officially planned four weddings!!! Thanks to Covid-19, their first original plan for a traditional wedding in Oregon near the Gorge was cancelled. At the time that I met Ash and Kamaile they were planning an elopement on Mt Lemmon since it is a place they climb, hike, and camp at a lot. We had everything planned; we chose the camp spot, they scouted for the perfect places for the ceremony, and they had invited their friends. Then came the Bighorn Fire and we quickly had to come up with an entire new plan since the mountain was on fire just two weeks before the big day. We decided on Sedona! We brought plans together for the perfect location that would give them the views and experience they still wanted and would accommodate for family that was in town visiting and attending the ceremony. Between Covid-19, work, losing one of their beloved dogs, and applying for an advanced law degree, these two had the most intense couple of weeks leading up to their elopement that I could ever imagine, but it was the most beautiful day filled with joy. Kamaile said during the elopement that each time they replanned the wedding it actually became more and more perfect for them and what they actually wanted.

We met at Bell Rock for the ceremony and I have never seen the place so empty, they basically had the entire place to themselves. With friends and mom in tow, we found the perfect spot for them to exchange vows. There was a harsh wind in the air, but when it came time to start the ceremony Kamaile welcomed everyone speaking in her native Hawaiian tongue and then sang a song in honor of the land and it’s native people. Magically, the wind stopped for the rest of the ceremony. Kamaile’s friend from lake school in San Fransisco flew in to preform the ceremony, she had become an officiant the week that gay marriage was legalized! They shared laughter, tears of joy and exchanged hand written words of their love story and commitment to each other. As the ceremony concluded they celebrated and took a shot with their guests before splitting off for their sunset adventure. Before starting the bumpy part of the ride we stopped for ice slushees to cool off from the Sedona’s summer heat, it was the perfect remedy. We took an off road adventure to a higher elevation to one of the best views for sunset in Sedona. As we arrived it was nice to relax, not be in a rush and see these two just enjoy their evening. Kamaile had surprise up her sleeve for Ash and performed a dance that in Hawaii is a traditional dance bride’s perform for their new spouse. The dance she chose to do was her mother’s favorite, this was to honor her mother since she wasn’t able to attend the elopement. Afterwards they shared their first dance together on a rock ledge, these two for sure have no fear of heights! As we explored the area they stopped to admire bugs, told us memories of living in Hawaii and of course shared lots of laughter and dance moves.

They popped champagne as the sun started to set and sat to watch the beautiful color show to gather, their first sunset as wives, and it was a stunning one!!! They both have some of the most beautiful tattoos I have seen, so I asked them which were their favorites of each other. Turns out they learned something new about each other here! Kamaile’s favorite of Ash’s was her leg piece displaying some of her favorite things about home, Oregon. Ash’s favorite of Kamaile’s was a piece on her shoulder and back that she was there for when she got it, four different flowers representing the four women that raised Kamaile. As we headed back down, the mountain excitement grew over the tacos their friends were grilling up back at the Airbnb! We arrived to excitement from their friends, home made guac, and yummy tacos! The night ended with romantic photos under the Milky Way back at their ceremony location! The show didn’t stop there though, we watched the largest golden moon rise over the horizon on the back to the Airbnb. I dropped them back off with their friends to enjoy celebrating their night. I checked in with them the following day with sneak peek photos from their elopement only to hear they had spent their first day married watching a sunrise and a sunset in Sedona, it doesn’t get much better than that!!” 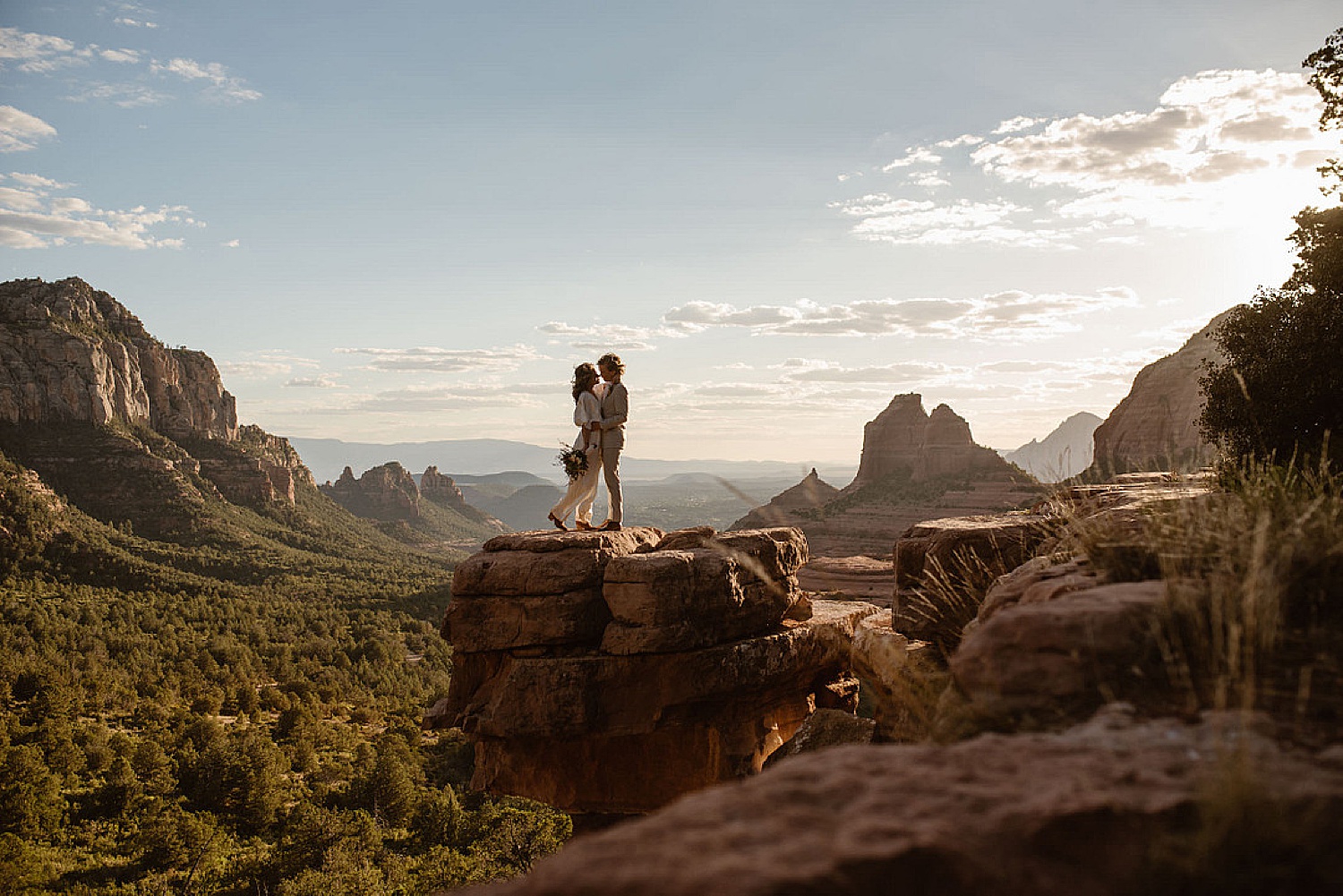 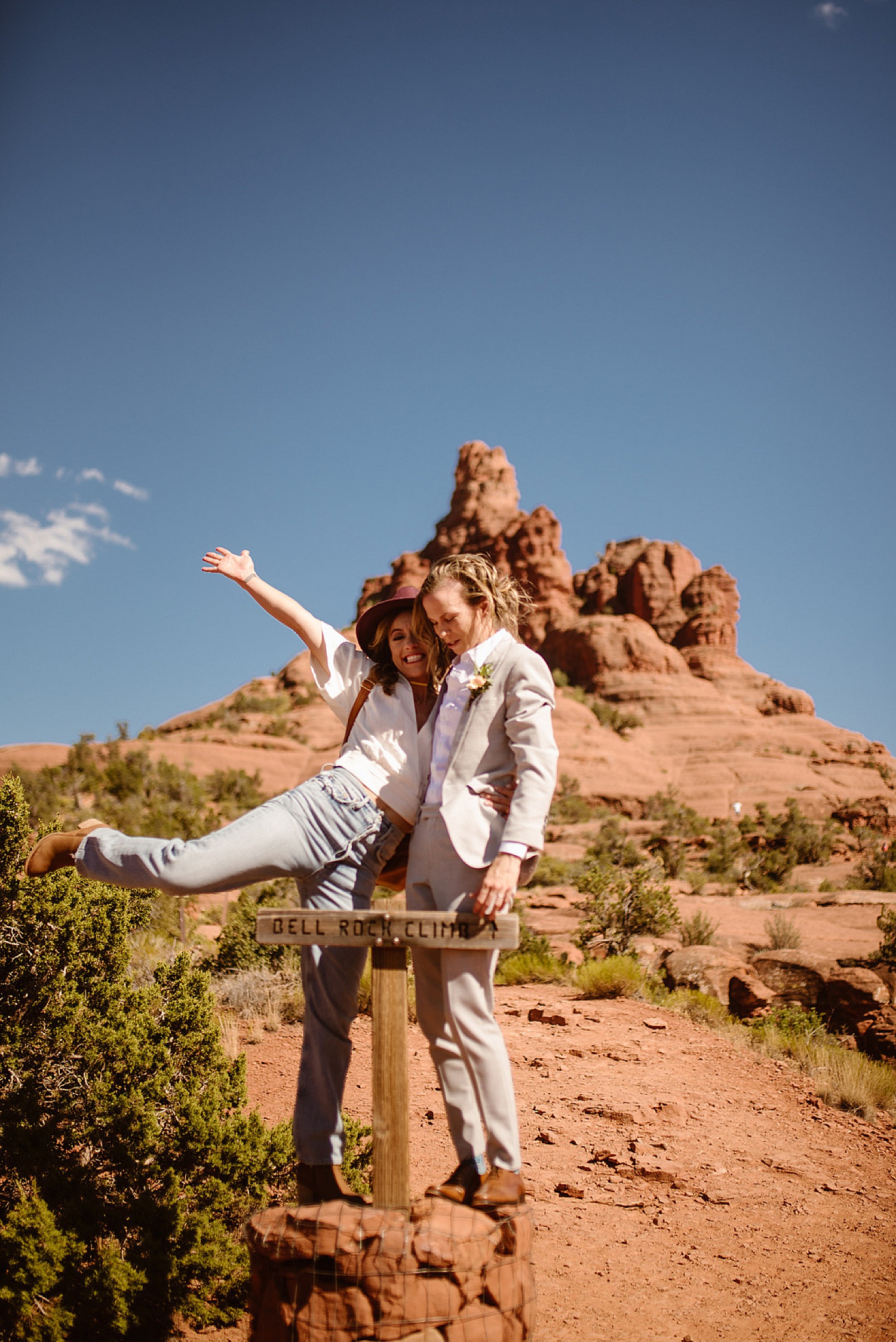 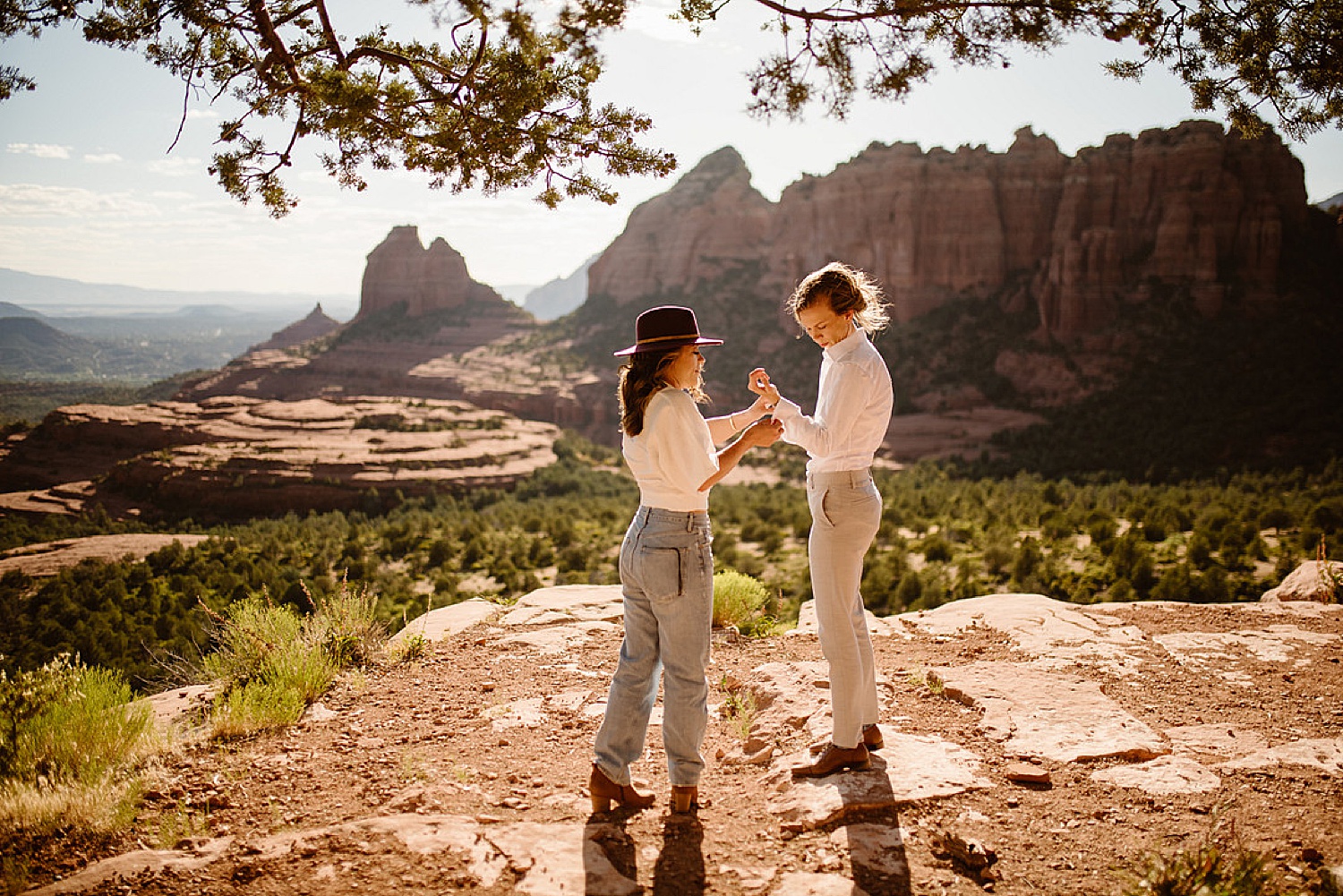 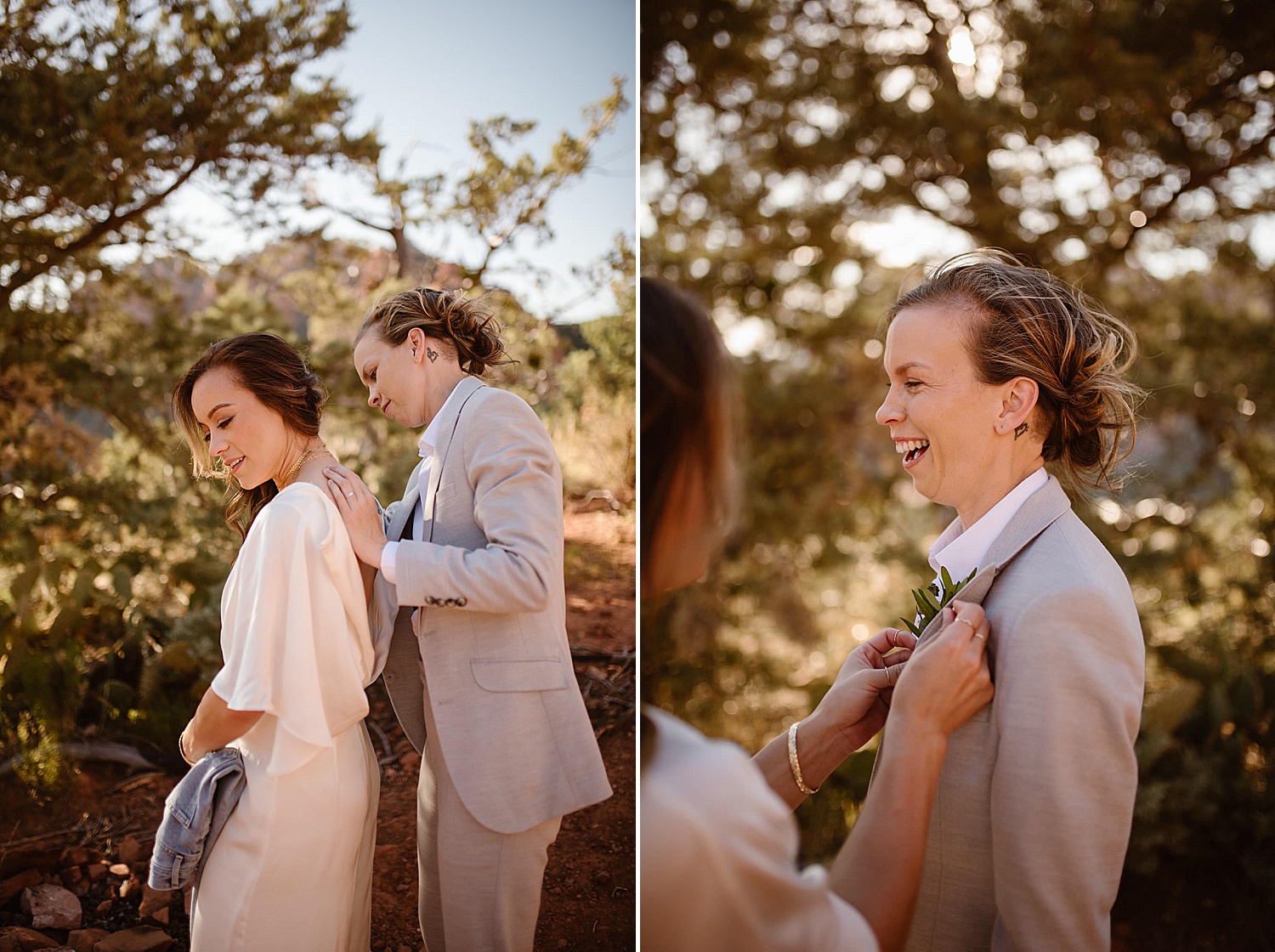 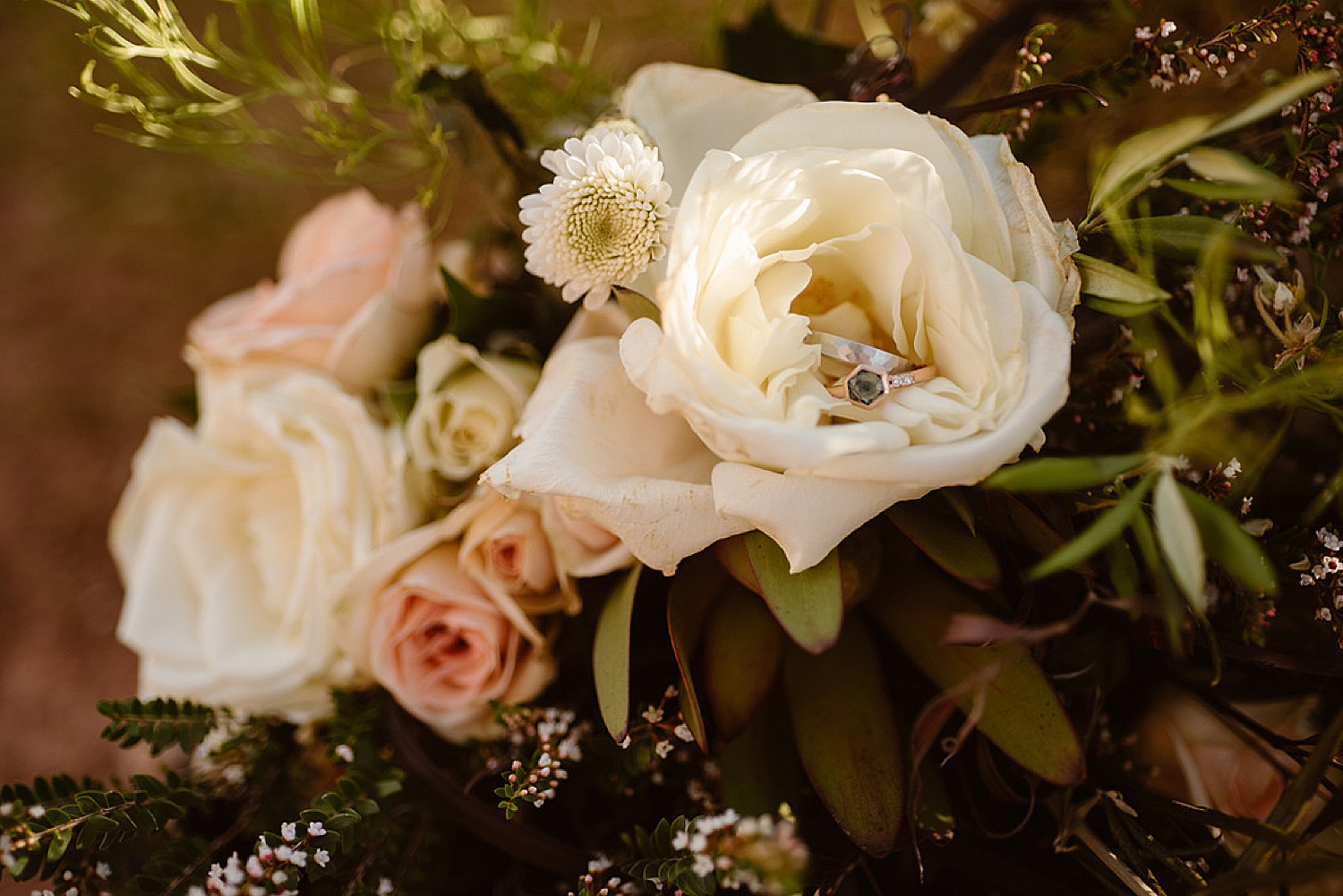 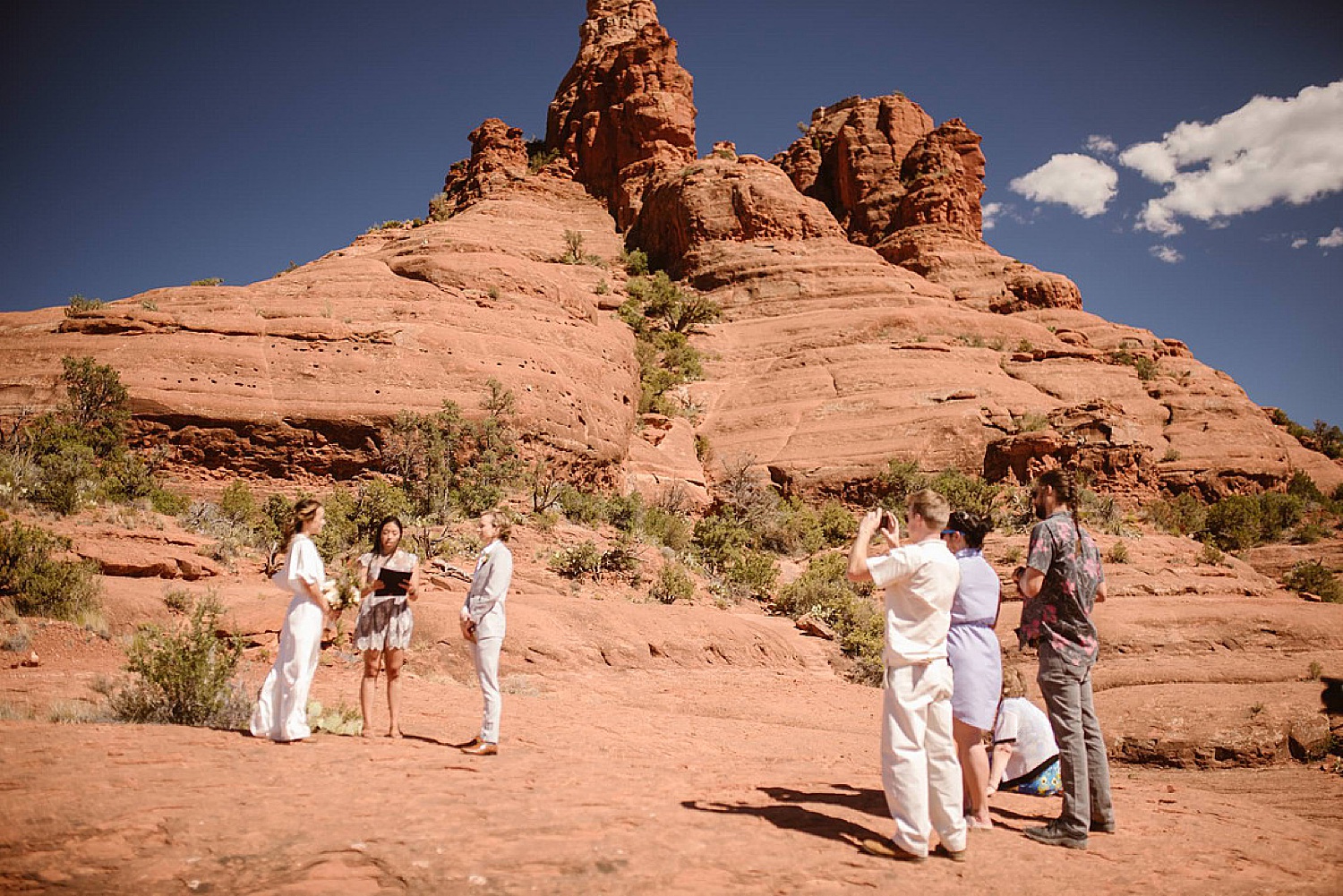 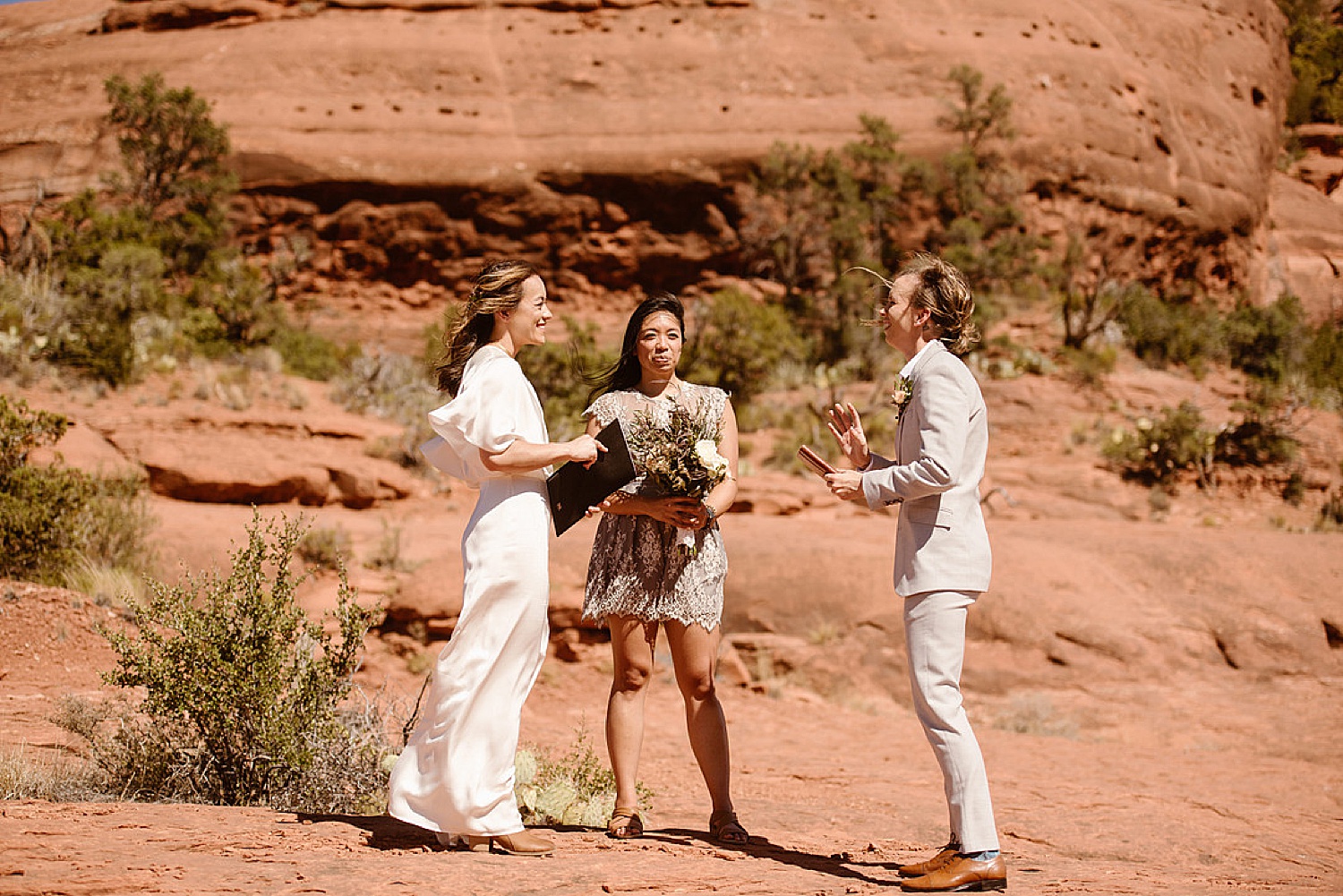 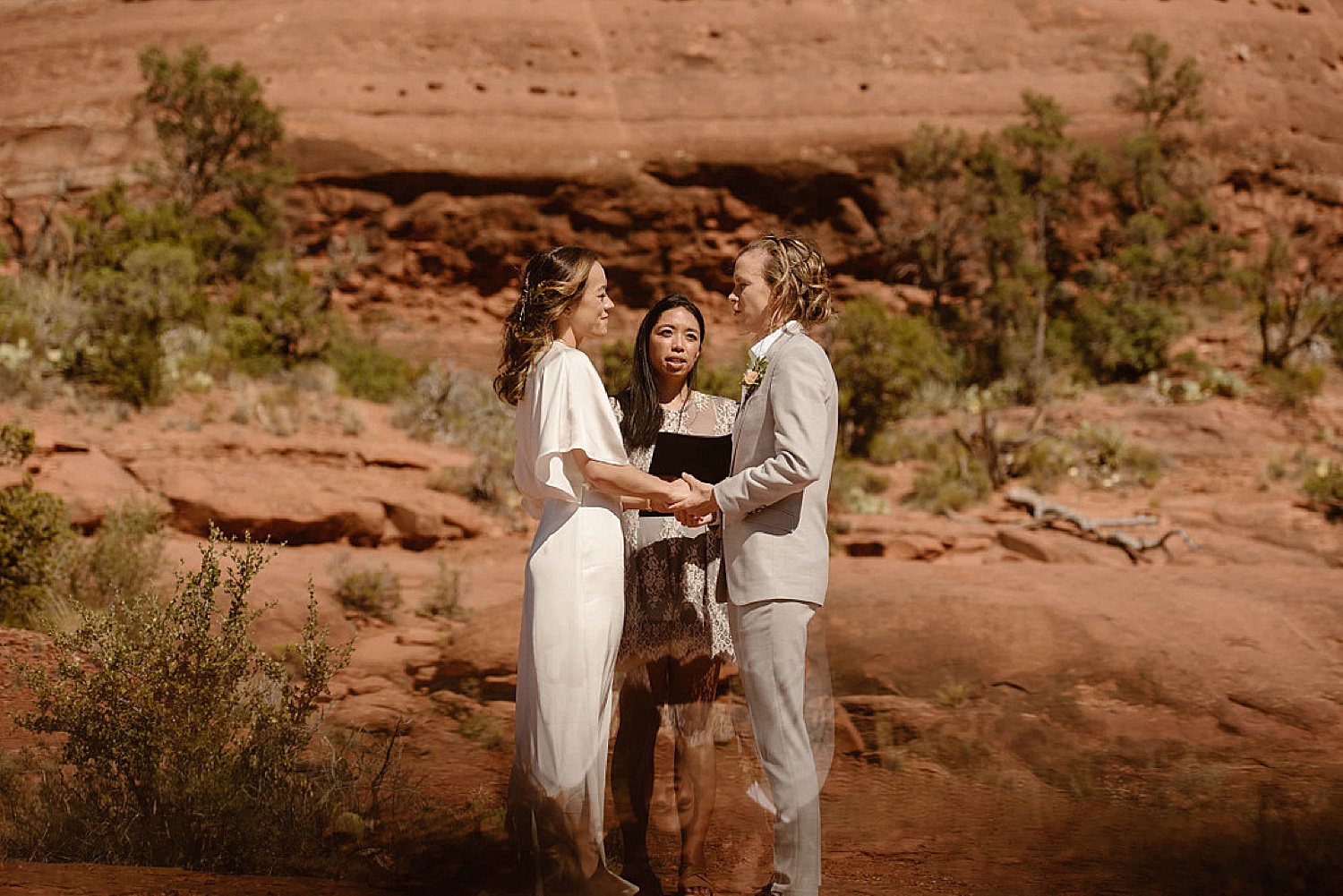 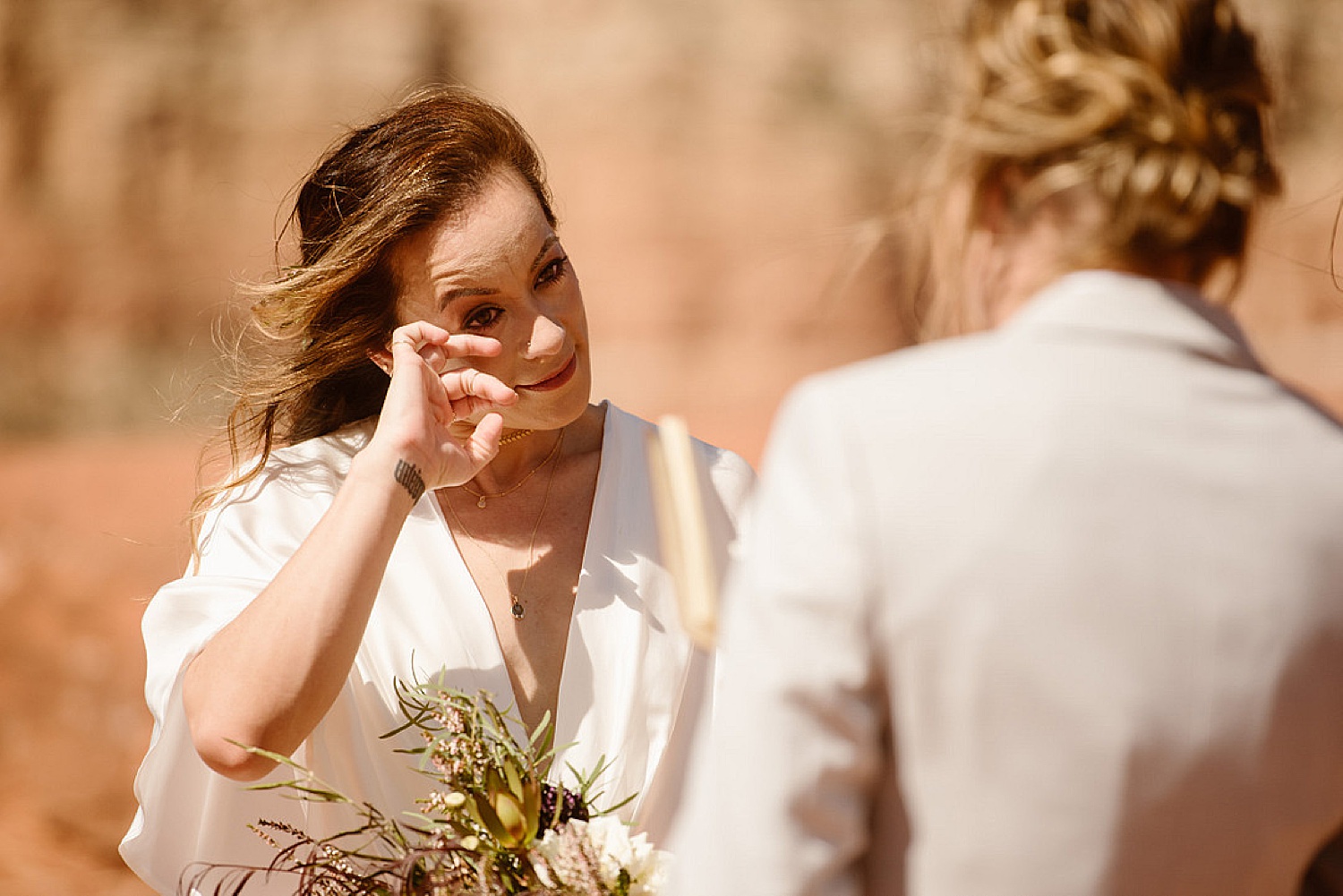 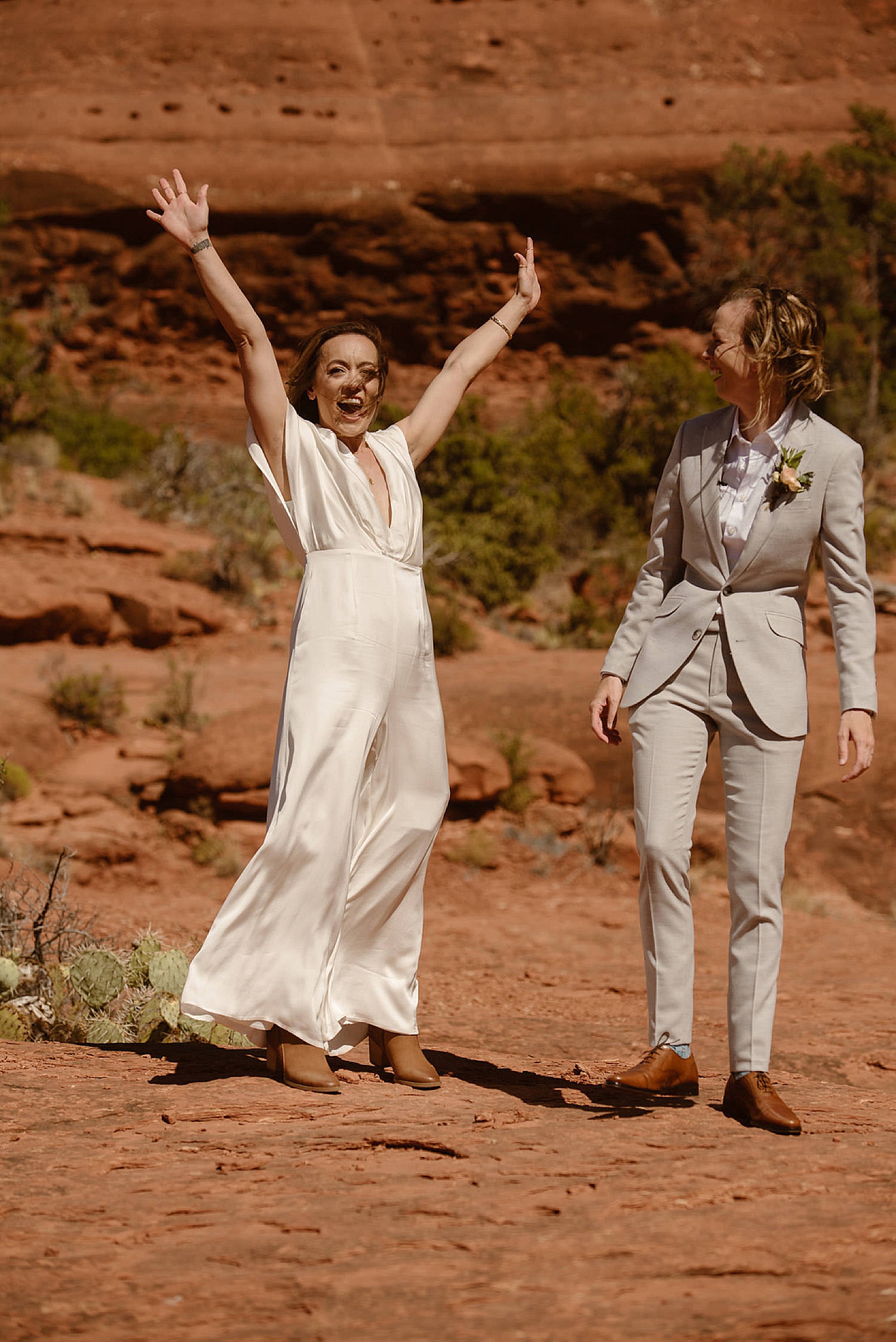 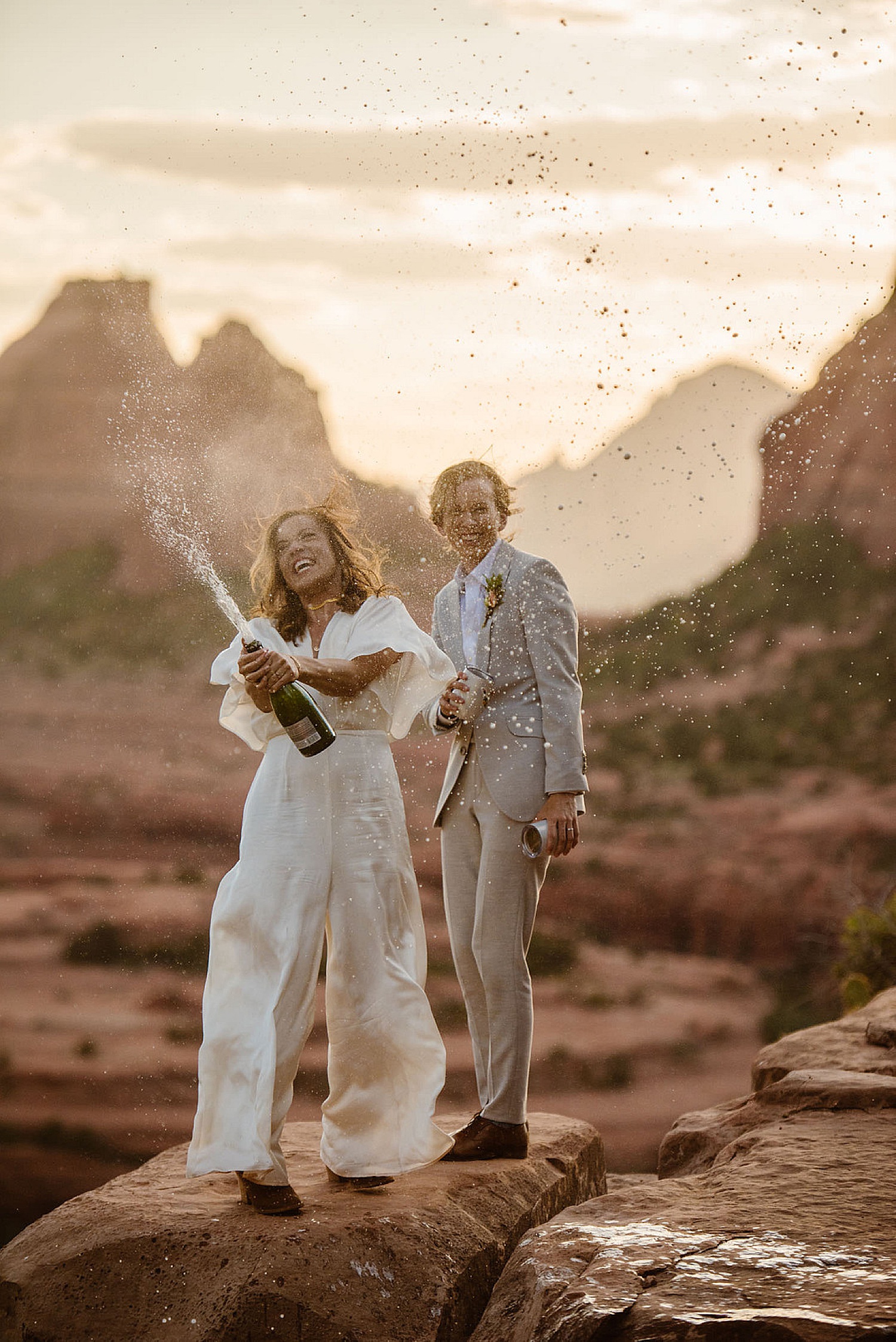 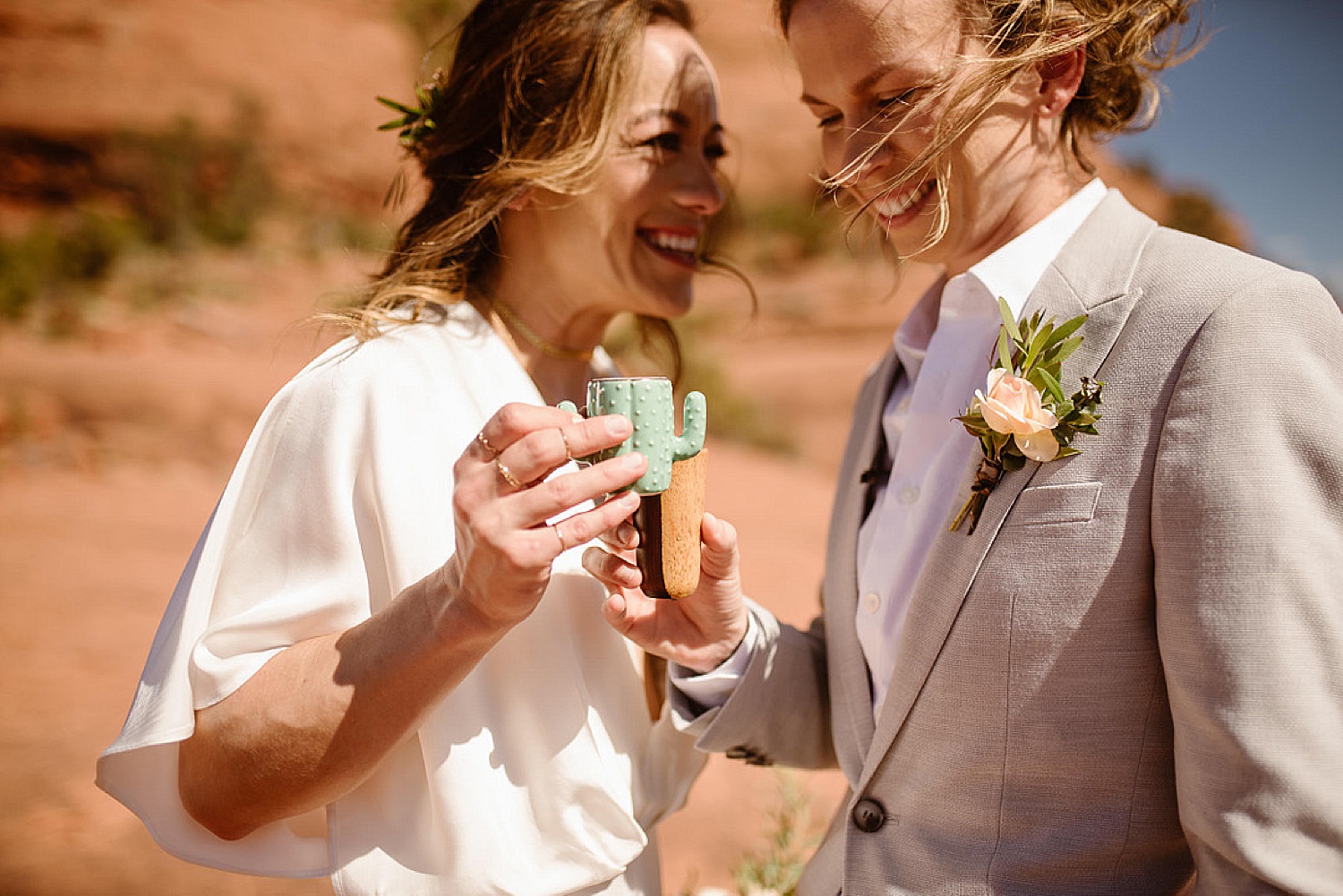 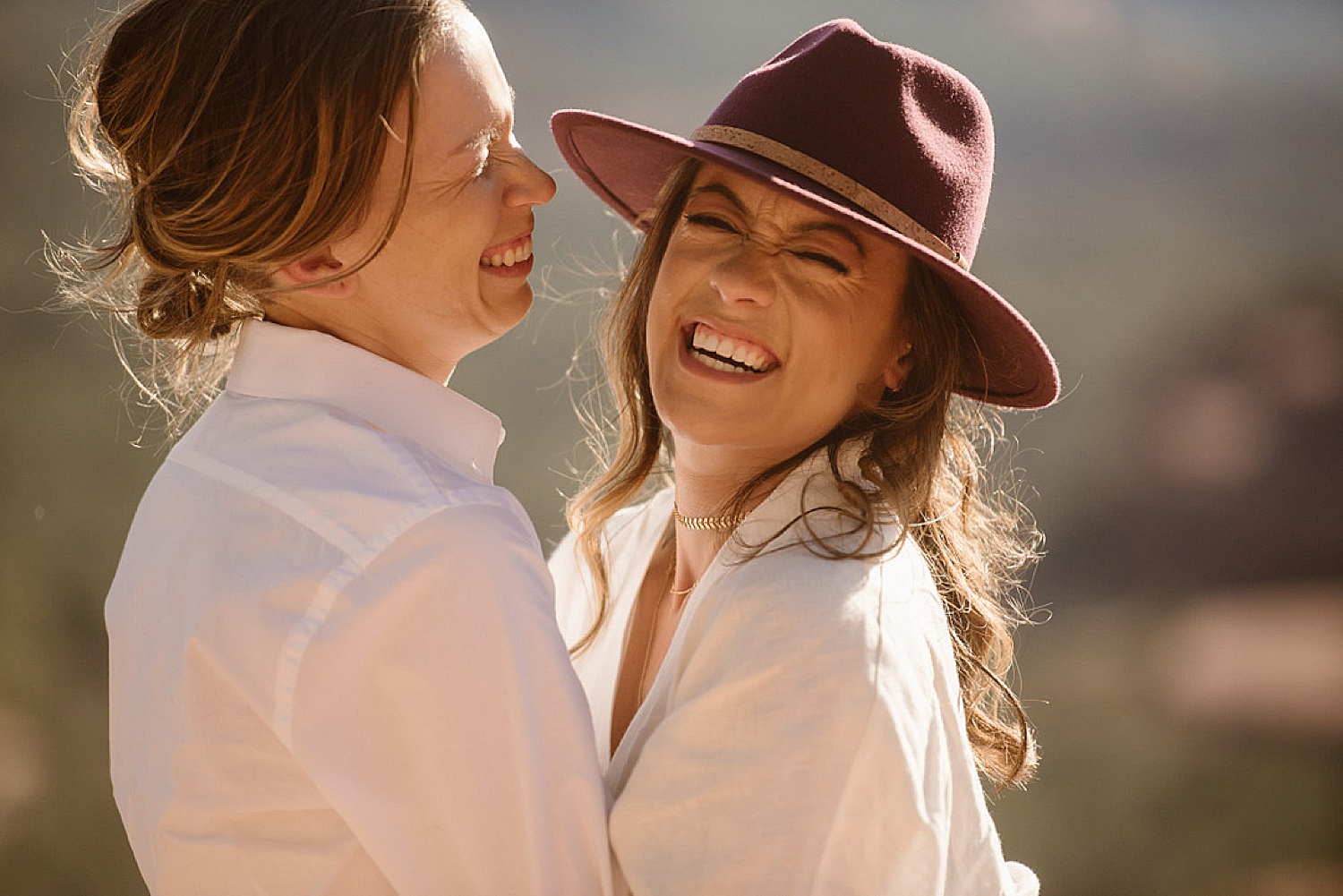 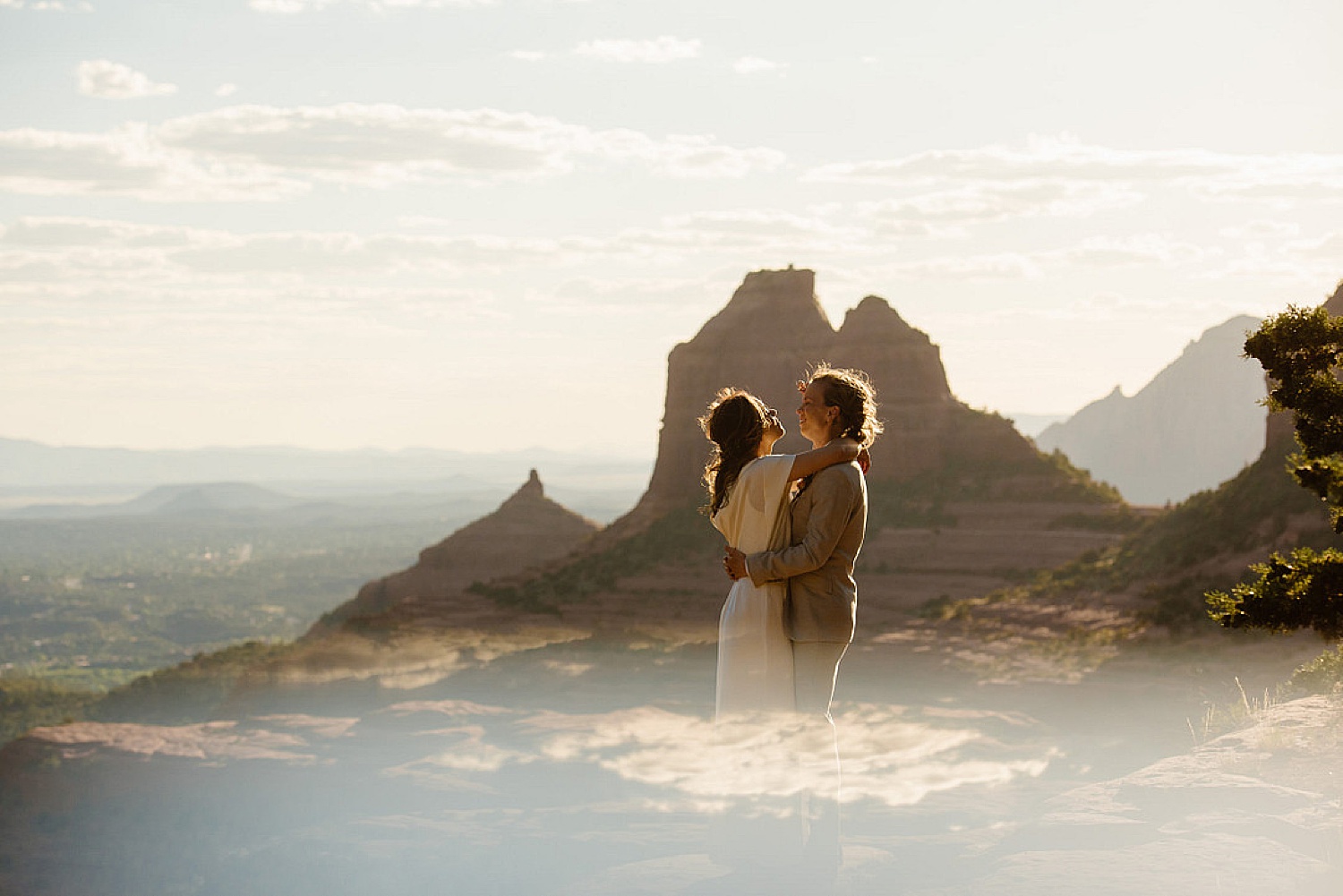 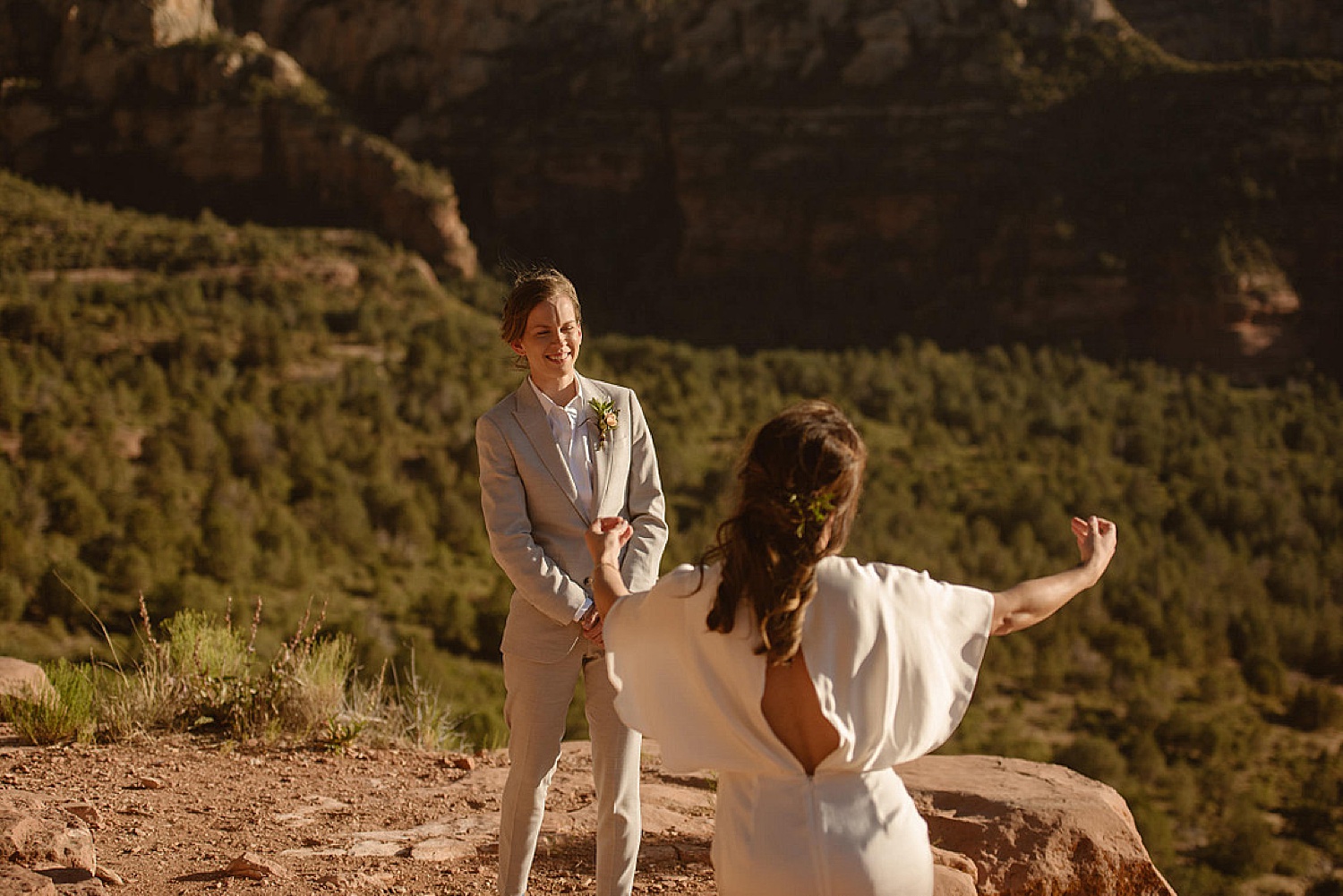 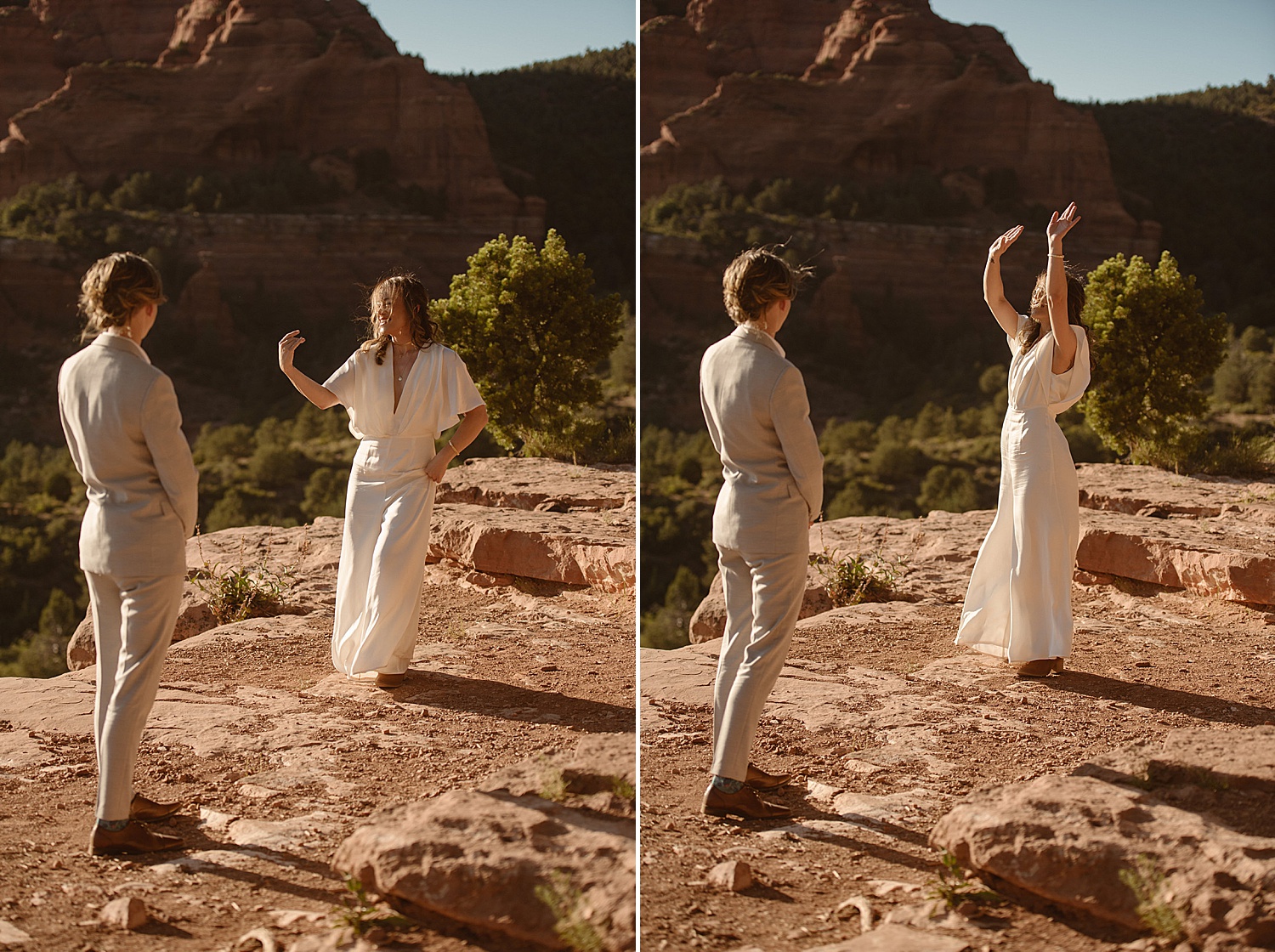 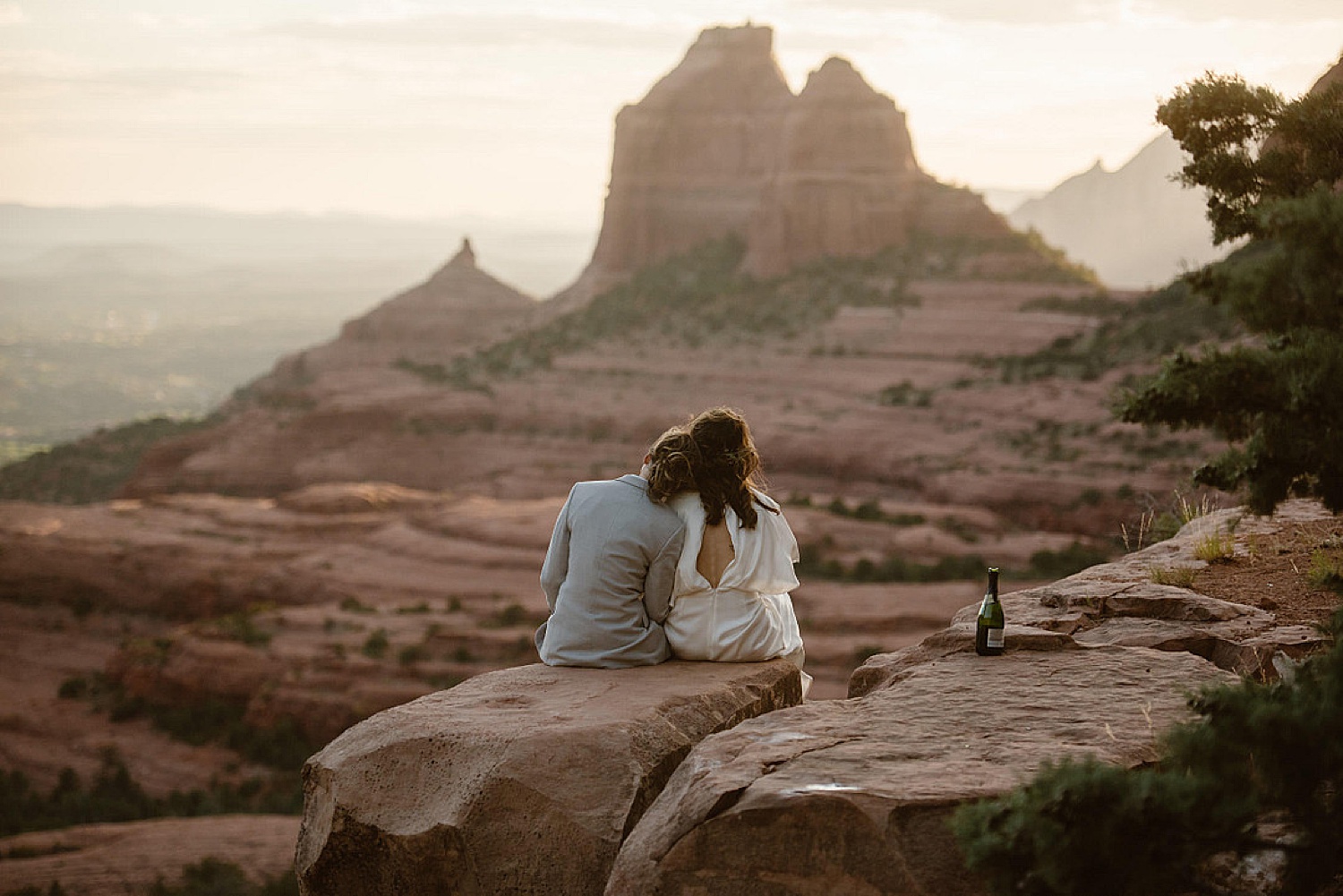 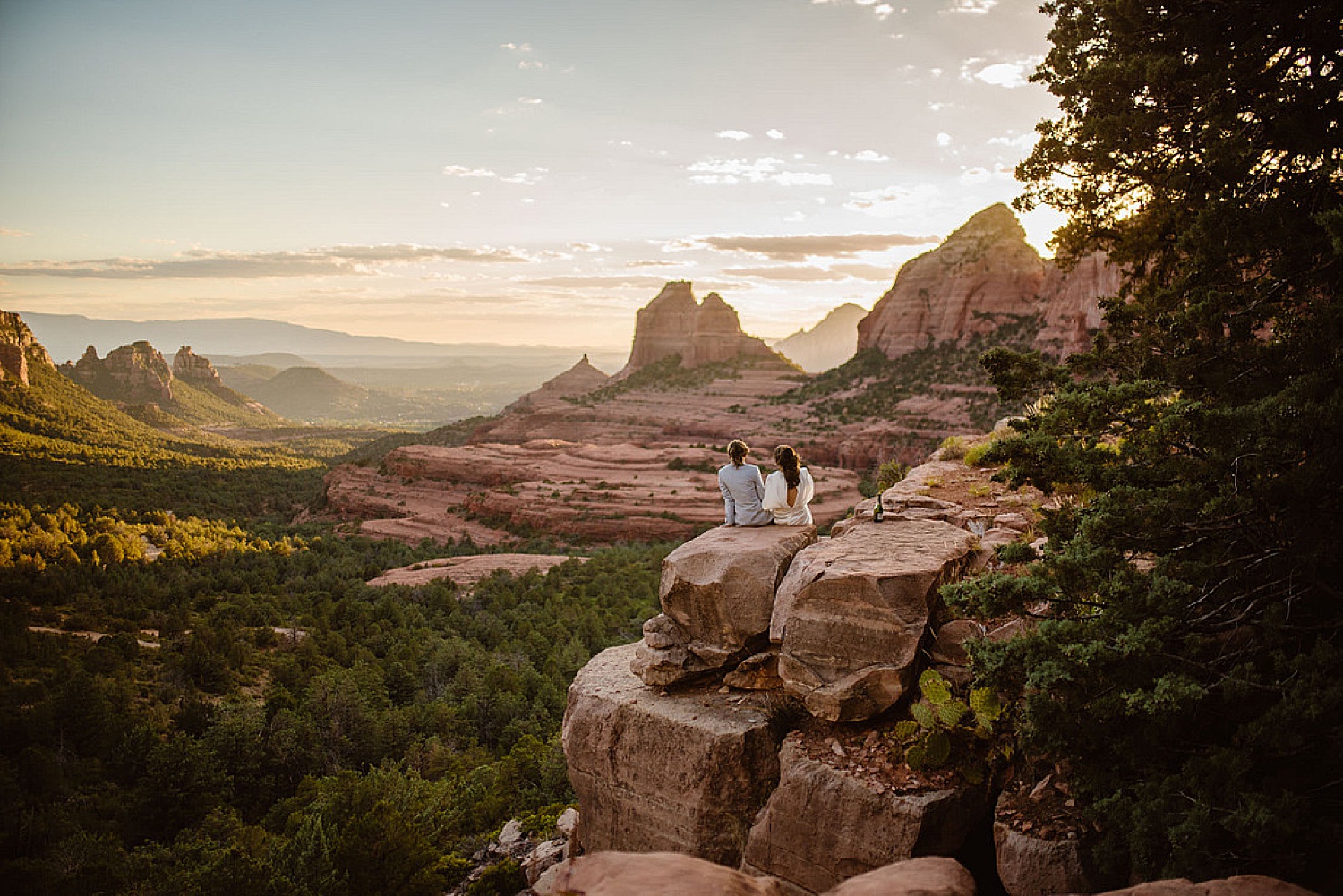 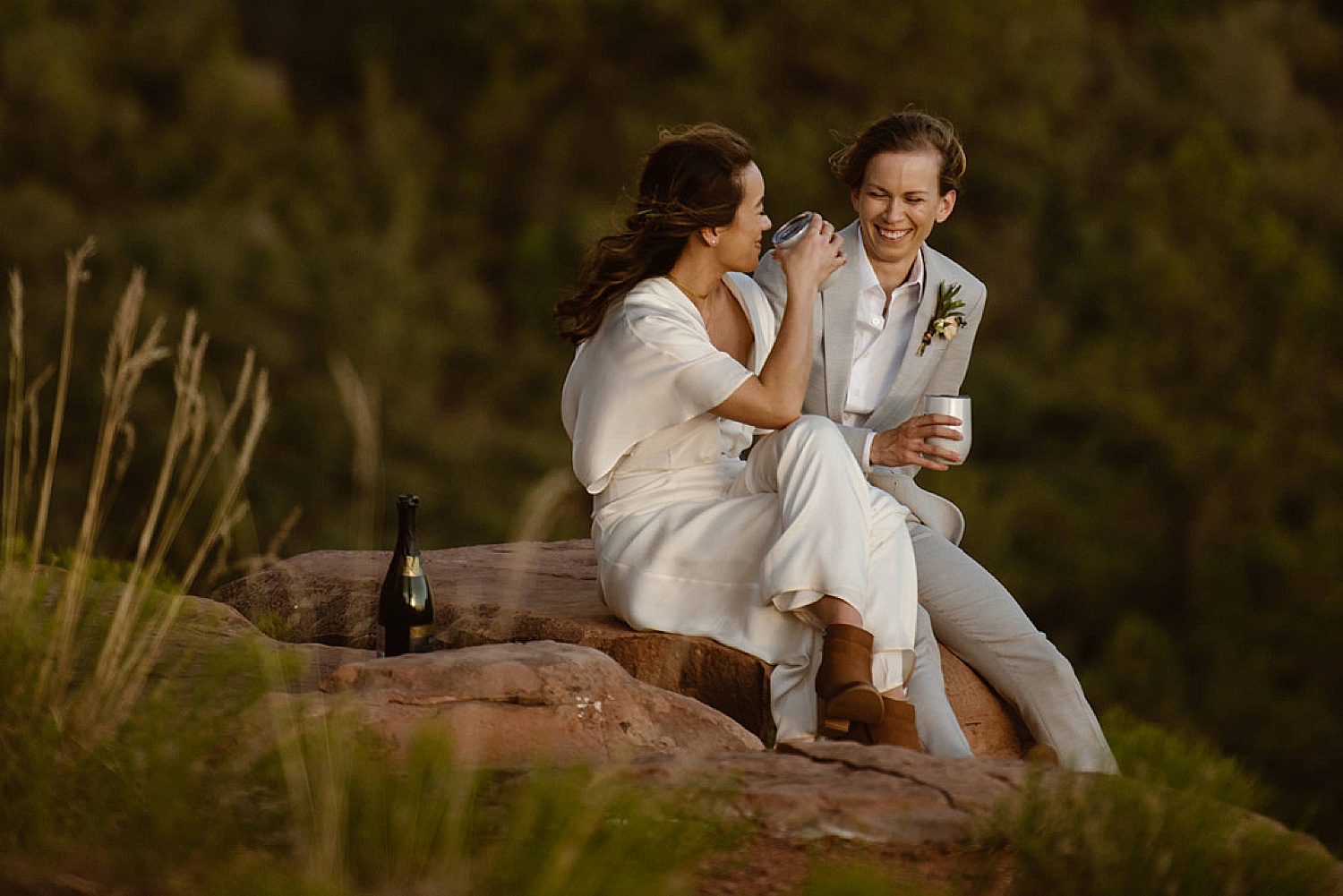 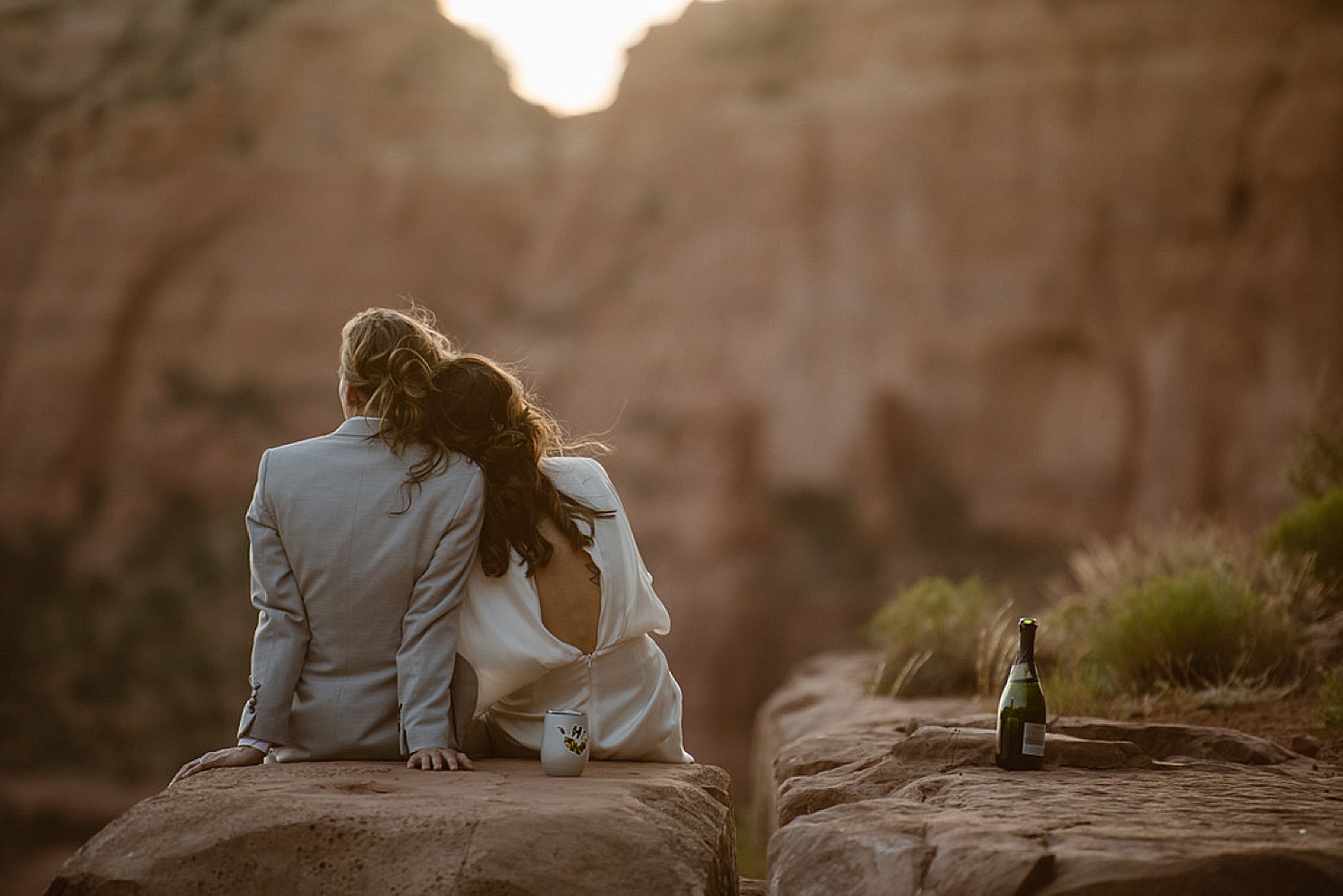 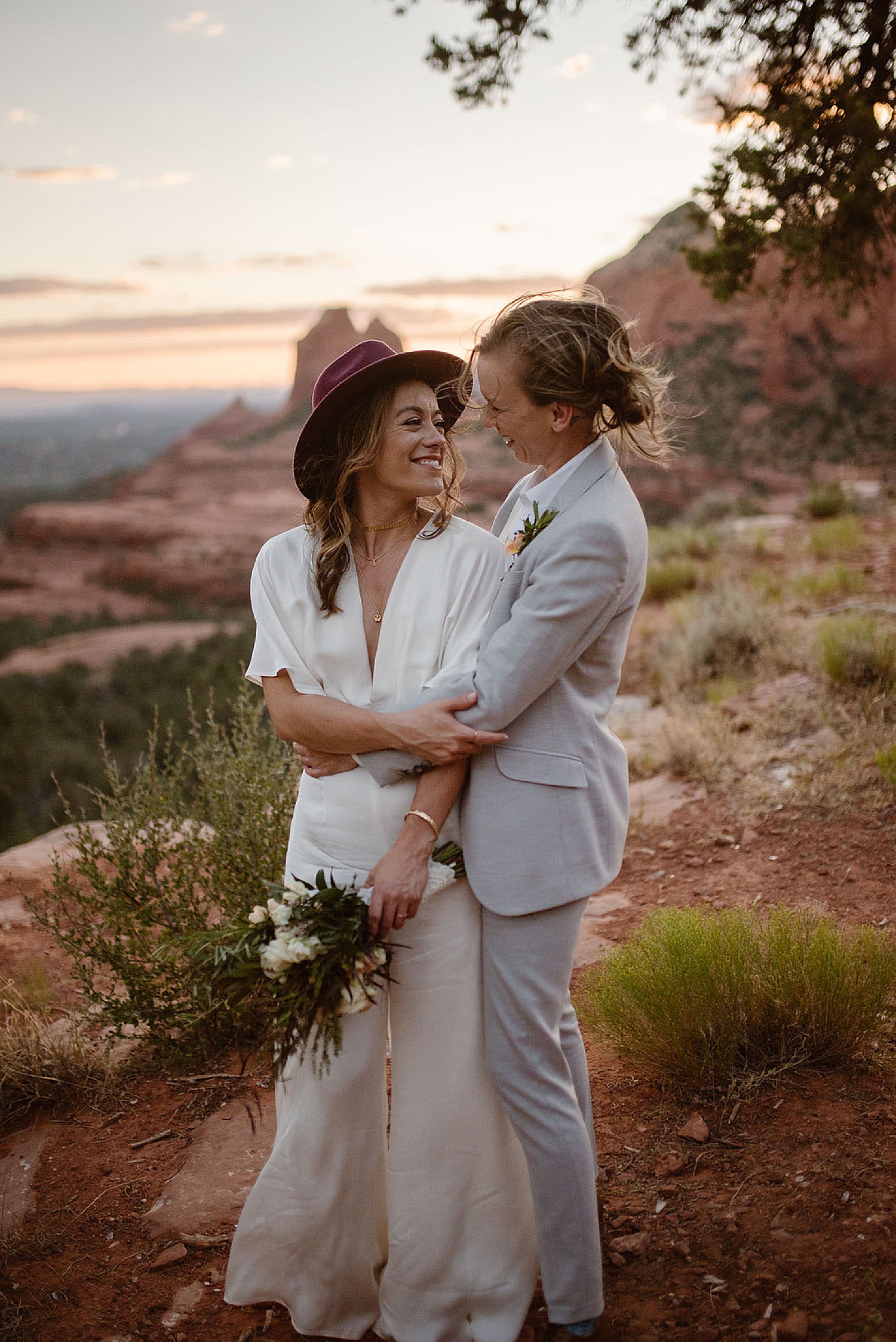 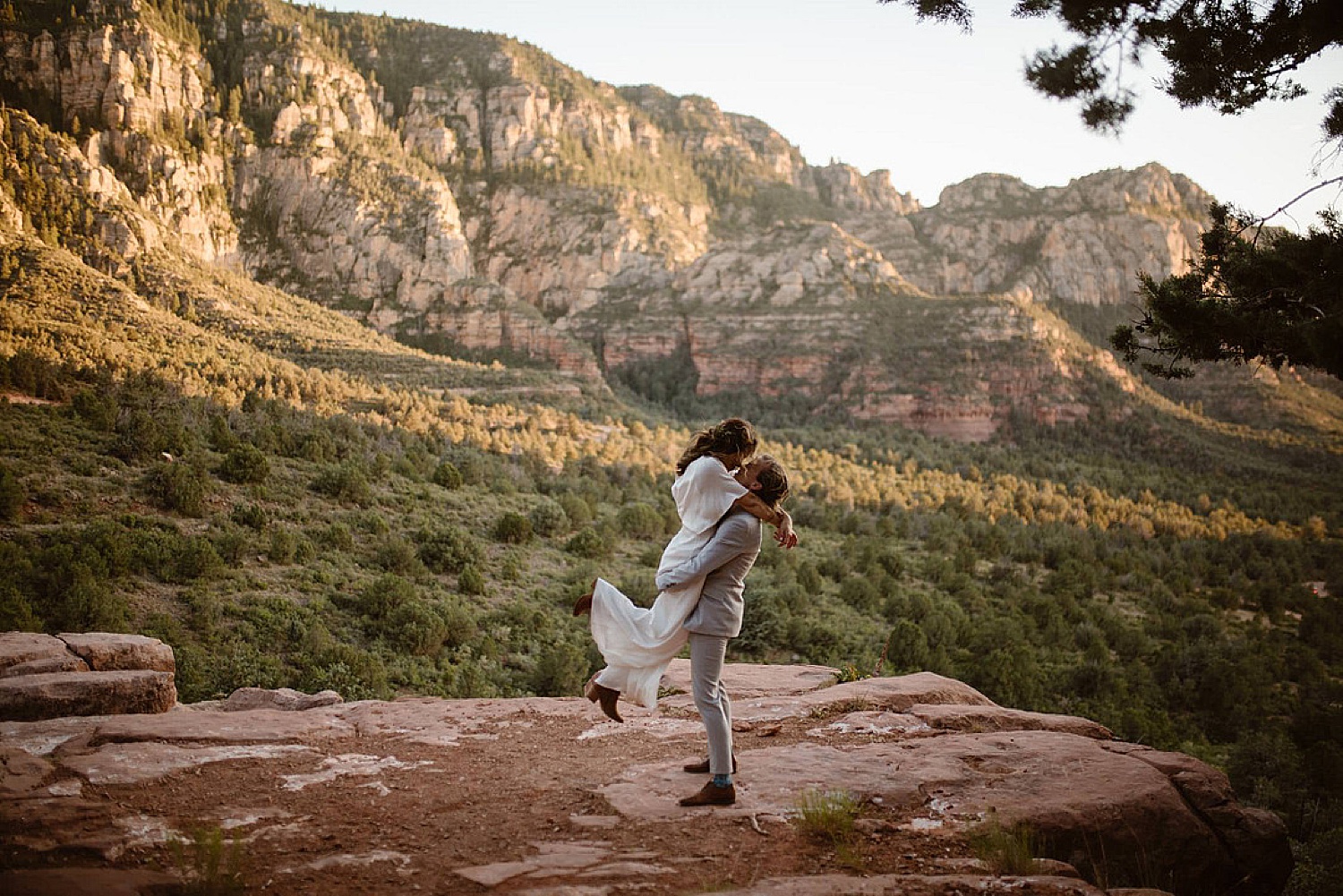 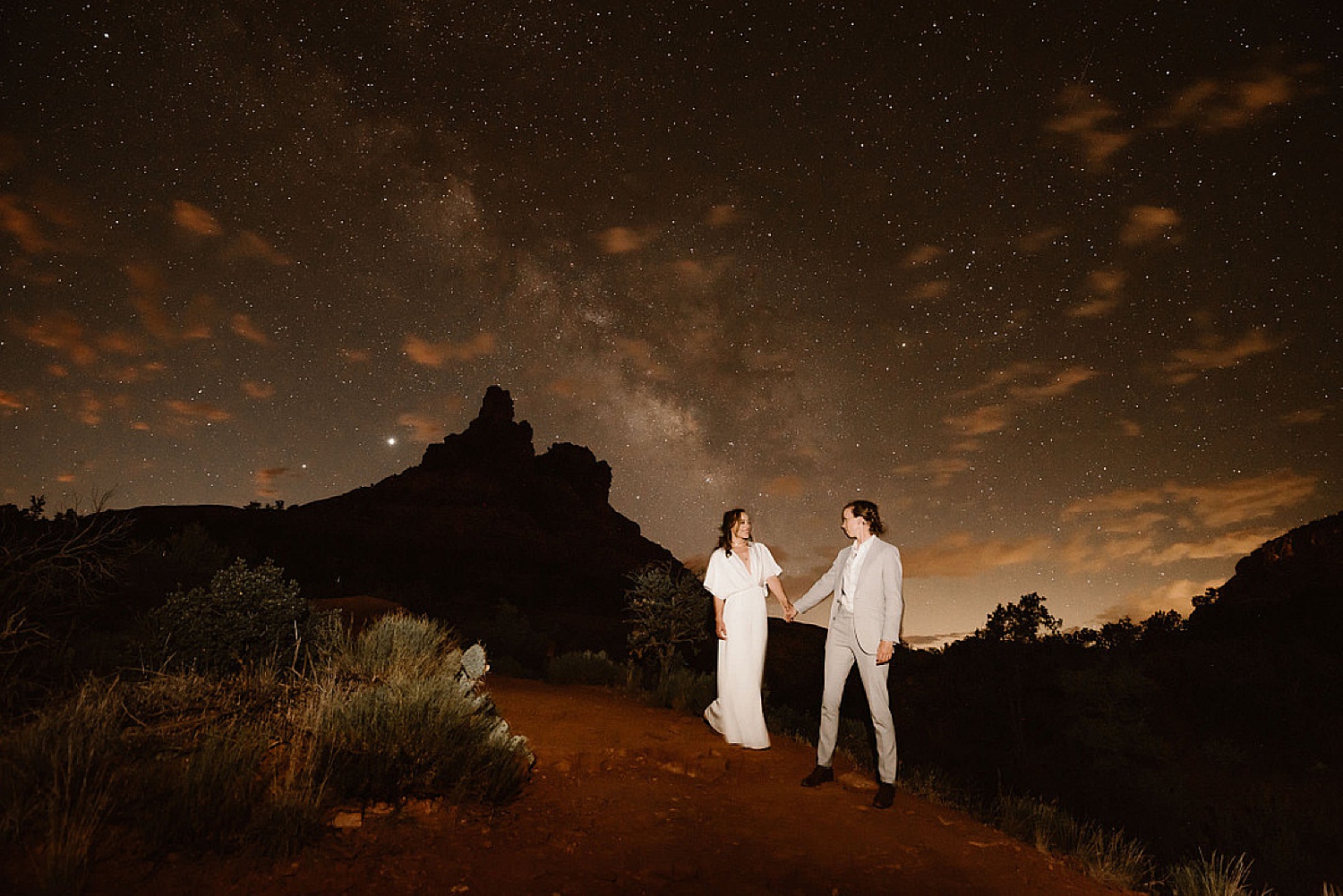